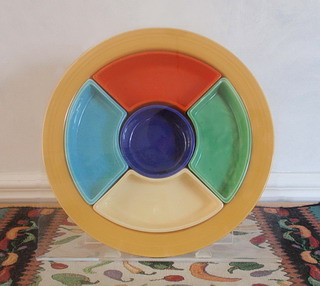 Fiesta was designed by Frederick Hurton Rhead in 1936 for the Homer Laughlin China Co., often known as HLC, and is now among the most collected china products in the world. The dinnerware was unveiled by the firm at the Pottery and Glass Show in Pittsburgh, instantly capturing the imagination of the industry.

The original five colors were red, cobalt blue, light green, old ivory and yellow. In 1937, turquoise was added to the line.

By the Fall of 1951, cobalt blue, light green and old ivory were retired. Their replacements are today dubbed the 50s colors, since they were produced in quantity throughout the decade. These colors were forest green, rose, chartreuse and gray.

During this time, the popularity of the china soared. Meanwhile, most people identified the dishes as Fiestaware, to the consternation of HLC, because it had been always officially named Fiesta. After this point, the horse had left the barn, and the term Fiestaware persists.

Fiesta's famous original red glaze was produced until 1943. The big news was that in 1959, the Atomic Energy Commission licensed china and pottery manufacturers, including Homer Laughlin, to purchase depleted uranium oxide, allowing red Fiesta to return to the market in March 1959. Additionally this same year, turquoise and yellow returned to the market, plus medium green was introduced.

By 1969, the needs and tastes of the modern housewife has changed. The line ultimately ceased production by 1972. The Fiesta produced during this entire time period is referred to as vintage Fiestaware or officially as vintage Fiesta, and it has become highly prized.

Below are all vintage Fiesta auctions, conveniently sorted by those ending soonest. Feel free to bookmark this convenient view, which displays the first 200 auctions at one glance.