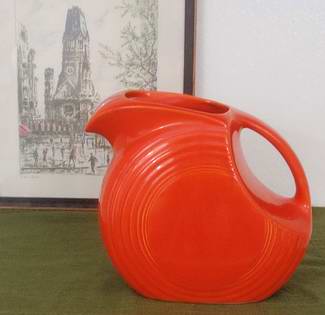 Instantly recognizable, this orange-tinted red was one of the original five colors when Fiesta was introduced in 1937. Red was the simplest choice because business demand indicated that color would be commerically successful. This continues up to today, since Scarlet Red persists as the top-selling color of Fiesta.

This atomic recipe led to the now infamous labelling of Fiesta as radioactive, or more spcifically, radioactive red. Are these levels at all dangerous? Not al all. Surfact contact on a vintage red 9" dinner plate produces 0.5 mR/hr (milliroentgens per hour. To contrast, the radium dial on a watch produces 20 mR/hr and a chest X-Ray produces 44mR per film. According to the Huxford's "safe levels for humans workling with radiation is 20 mR/day as background radiation."

Muckracking news stories starting then and continuing up to today only heightened the gossip, but presentation of the science shows that using vintage Red Fiesta dishes does not create a china syndrome.

Vintage red is truly one of the most brilliant colors ever produced in the history of dinnerware. Collecting this glaze is highly rewarding.