No Hamburgers at Louie Mueller Barbecue?

Hope for Hamburgers at Louie Mueller Barbecue Goes Up in Smoke 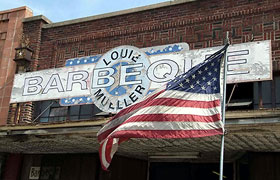 Ever wake up with a hair-brained idea that just won't go away? Well, anyone who knows me would be surprised if the sun arose on a day that I didn't wake up in that condition.

A little over a year ago, if memory serves, I came up with the notion that the best Texas barbecue joint should also serve the best Texas hamburger. Well, there was no doubt in my mind that I needed to call Wayne Mueller, the third generation of Mueller's, running Louie Mueller Barbecue, in Taylor.

Wayne and I have never actually met face-to-face, but instead, by phone and emails, just after his father, Bobby, passed away in September of 2008. It was then that I sent Wayne a signed and dedicated copy of my Texas barbecue that now occupies a place of honor on a smoke-blackened wall in Louie's. I couldn't be prouder, even if he hadn't promised me some barbecue the next time I came to town. Shortly after that, I was a reference that maybe helped land a really good old friend a job, wrangling Louie's famous 'cue.

I guess it was all those "connections" which led me to assume that Wayne Mueller would literally jump at the chance to add a hamburger to his menu, but something told me to get a second or third opinion, so I first asked my old Texas barbecue-eatin' buddy, Eddie Smith, what he thought of the idea.

"It's one of the top Texas barbecue joints for a reason, Rick," Eddie said, without hesitation, "what makes you think they'd make a great burger?"

Well, so much for a second opinion, I thought to myself. Eddie's too close to the subject. I need to ask someone out of state. My friend, Bryan Stovall came to mind, and a phone call later, I concluded that Savannah, Georgia was too far from the subject.

Of course, both Smith and Stovall made valid points, just not the ones I wanted to hear. Enough second and third opinions, it was time for the acid test, so I placed a call to Wayne.

"You're kidding, right?" with chuckling, was hardly the response that I expected.

"Well, no, not really," I stammered, "you have the best meat in the state, so why not grind a bit of it and make the best Texas hamburger?"

Wayne Mueller is nothing, if not a diplomat, "But we sell every ounce of meat we can handle, as barbecue, Rick."

He had me there, and our conversation ended cordially, with an invitation from Wayne to come see how he'd framed my to hang by the cash register.

A couple months and a new conversation later, Wayne explained patiently that he had no idea how his customers might react to the world's first "Smoked Brisket & Ham & Sausage & Turkey Burger."

Pushy me asked, "But you will consider testing the concept?"

"I'll certainly consider it, Rick," Wayne promised, "We'll talk more when you come have some barbecue with me."

The Barbecue Urge in Lubbock

I moved my residence to Lubbock last summer, and since then I've had precious little time for trips "back east," and sure am missing Texas' best barbecue. Several of Texas' best hamburgers have helped to ease those pangs, but a couple months ago, I came up with the perfect arrangement. No other opinions necessary, I had indeed come up with an offer that Wayne simply could not refuse, so the day before Christmas Eve, I phoned him with my "gift" of a plan.

You tell me what you think, dear reader… Logically, Lubbock isn't the ideal location for Louie Mueller Barbecue West, so to Wayne's voice mail, after wishing him a very Merry Christmas, I suggested that he consider opening a new and unique "BarBurger" concept joint in downtown Guthrie. Killer, huh? I mean, how could it miss? Folks would travel great distances for the best barbecue in Texas – now available, way closer to their homes in West Texas – and wouldn't they be surprised to find what? Why, only some of the best Texas hamburger, that's what, made from fresh 6666 Ranch beef.

NOTE: Doing extensive research for my upcoming book, Looking for the Best Texas Hamburger, I learned all about the great beef from the 6666 Ranch, and the sad fact that presently, other than 6666 Ranch beef, served as burgers at the Guthrie Jaguars' concession stand on "game nights,"

King County is one of only three Texas counties without a single hamburger joint; Kenedy (Sarita – County Seat) and Loving (Mentone – County Seat) are the other two, but Mentone should have a brand new joint by May of this year…

I know that Wayne Mueller is a very busy guy and I certainly respect that. I am nothing, if not patient. And persistent. And considerate. So I waited until the day after St. Patrick's Day to give him a call.

Although I honestly suspect that both my old buddies may have spoken to Wayne behind my back, I reckon that I have to accept his decision – and it sounded pretty final.

"Many folks view us as one of the top Texas barbecue joint for a reason, Rick," Wayne said, then asked, "what makes you think we could make a great Texas hamburger?"

"Besides," he continued, "let's just say that we could make a great Texas hamburger, for the first time ever, Louie Mueller Barbecue's customers would be forced to make a very difficult choice between their favorite barbecue or their favorite hamburger."

I let all of that sink in for a bit, then pushy me asked, "But what about the new concept?"

"You were kidding right?" Wayne asked.

Our conversation ended once again with a cordial invitation to come have some barbecue in Taylor.

"I think that a lack of Louie's is taking its toll on you, my friend," Wayne chuckled, as he hung up.

So, what do you think, dear reader, should I seek a second opinion from the folks in King County? Or Kenedy County?

Rick Vanderpool, is an occasional writer for TexasCooking.com and lives in Lubbock, Texas.