Many people inherit or find colorful dishes, and need to know whether or not it is actual Fiesta. In many instances, that red or blue plate might resemble Fiesta, but it isn't. Over the years, many companies have designed inexpensive knock-offs that confuse the consumer. Furthermore, since the line has been in production since 1936, and taking into account the production hiatus, many people want to date the production of the item based on its marks. The short answer to all of this is it depends on the piece.

If you have a question about a specific piece, you can ask a question on our Fiesta / HLC message forum.

The first place to look in order to verify whether an item is genuine is to flip it over and look on the underside. Most fine china is backstamped with the manufacturer's logo. The original Fiesta design and name were filed by Homer Laughlin China Company on March 20, 1937 (Patent No. 390-298). To the right are the four most common backstamps.

HLC could not mark some Fiesta items because of design considerations. Examples of items without backstamps include vintage juice tumblers, demitasse cups, teacups and salt and pepper shakers. Of the vintage line, some ashtrays, egg cups, sweets comports and onion soup bowls are marked, while others are not.

Once you become more aware of the design and color, recognizing Fiesta becomes easier. The key pattern to recognize on a piece of Fiesta is a band of concentric rings graduating in width. In its design, the rings closest to the rim are more widely spaced.

Since 1986, Homer Laughlin has also used a rubber backstamp to mark some of its Fiesta items. Used mainly on cups and bowls, it uses the words HLC USA and genuine. Vintage Fiesta backstamps use a lower case "f" in the word Fiesta. The new stamp capitalizes the "F" in the name. All the backstamps are applied by machine. Eventually the company hopes to backstamp all post 86 pieces.

One of the Post 86 Fiesta backstamps contains a useful three letter date code. Note a series of three small letters in the backstamp itself. This is HLC's date coding system which it has used since the 1960's. The letters AA indicate 1986, BB indicates 1987, CC indicates 1988, and so on.

The last letter indicates what quarter of the year an item was made. Therefore, A represents the first quarter, followed by B, C and D. Therefore a backstamp with the letters KKA indicates that the item was made in January, February or March of 1996. Note that the backstamp only indicates when the item was formed. It does not take into account the additional time to completion. Therefore date coding should only be used as an approximation. However HLC did not utilize this stamp until six years into Post 86 production, nor has it been applied consistently to all the Post 86 pieces.

In 1998, Homer Laughlin added a small raised H to the undersides of all Fiesta made from the original molds. This includes, for example, the bud vase, candlestick holders and disc pitchers. However note this convention was added only during the midpoint of the post-86 pearl gray production. 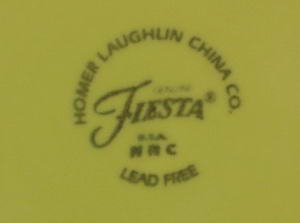 Flip over a Fiesta dish, cup or trivet, and you can determine that piece's production date down to the quarter of the year, if it has the three letter code backstamp.