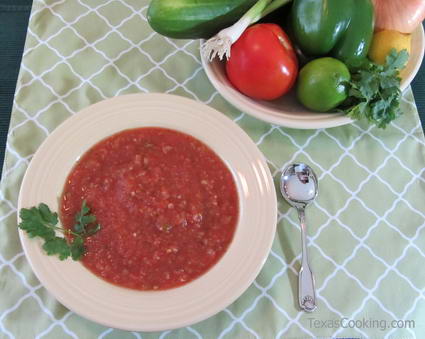 A group of my friends gathered at Lady Bird Johnson Park in Fredericksburg, Texas for a pre-Memorial Day get-together. Of course, we had to have something to eat over the two days we spent out there under the beautiful pecan trees.

We have just one meal a day. It starts shortly after the sun comes up and lasts until we go to bed.

Friday's meal was a potluck buffet. We had the usual healthy veggie sticks with dip, pasta salads, chips and dips and baked chicken. I felt obligated to whip up something special, as I am the only working food writer in our crowd at this time. My choice was Southwestern-style gazpacho. It fits right in with Texas tastes for Tex-Mex. Here's how.

To bring out the sweetness of the tomatoes, I roasted them in the oven before processing them. I put them on a cookie sheet and ran them under the hot broiler until they charred and blistered (about five minutes), turned them over and did the other side. Then the skins will easily slip off the tomatoes when they get cool enough to handle. I squeezed out the seeds and pulp.

The cucumber was peeled. Half was cut into bite-sized chunks; the rest was cut into fine dice and set aside. The bell pepper was seeded and cut in half; half was diced fine and reserved, and the rest cut into strips. The onion got peeled and the half-and-half treatment also.

The undiced veggies went in the blender with a cup of tomato juice and were pureed. You may need to do this in two batches.

All the pureed veggies go in a large container, along with the reserved chopped veggies, and as much of the remaining tomato juice as you see fit. Season to taste with salt and black pepper. Cover and refrigerate overnight.

This recipe makes a lot of gazpacho. I had enough for our gang for two days and brought some home. Keep it on ice.

Looking back, I think I got just a tad too much salt in the gazpacho and I think a couple of drops of Tabasco would have added to the taste. Wait until next time.

For our Saturday feed, I grilled a batch of "Cuzin Homer's Chicken Delights".

Wash the thighs and trim off the excess fat. You are going to roll them so if they are extra large you might want to cut them in half. Try to get them all the same size so they will cook evenly. Flatten the thighs. Season the cut side of the thighs with your favorite poultry seasoning or Lawry's seasoned salt. Roll the thighs as tight as possible, with the seasoning on the inside. Wrap with a strip of the bacon and fasten with a heavy-duty toothpick.

The thighs go on a medium-hot grill about four inches over the coals. (If you are grilless, you can broil them in the oven). The bacon is going to drip fat and make a lot of smoke, so be careful about getting a flare-up. If that happens, just close the cover on the grill and close the vents, and the fire will go out before damage is done.

When the thighs are beginning to brown, start basting them with the glaze.

In a non-reactive saucepan over medium heat, melt the butter. Whisk in the vinegar and mustard. Add the sugar and continue whisking until combined well. Add salt and pepper. Let simmer a few minutes, remove from heat and cool. This fantastic glaze will work just fine on pork also.

In the early days of barbecue competitions, the cooks prepared either pork or beef, depending on where they were. Soon they decided that there was enough time to do more than just one meat for competition, so the menu became Beef, Pork and Chicken.

At first, the cooks just threw a half a chicken on the back of the grill and paid all their attention to the beef and pork. The chicken came out either burnt to a crisp or half raw. When the cooks started paying more attention to the birds, Italian dressing was the baste of choice. It's still a great seasoning for grilled yard bird.

Cuzin Homer Page from Temple, Texas was an innovator. He would experiment with various recipes. His reasoning on chicken was "I like the thighs best. I also like bacon, so why not combine the two"? Thus the Chicken Delights were born. Cuz won a lot of barbecue contests with them. He started sharing his recipe, and other folks started winning with the thighs. But Cuzin Homer had one ace up his sleeve. He had discovered a seasoning that improved the taste of the thighs One Hundred Percent. I vowed that I would never reveal the secret ingredient and I won't.

This is how a champion barbecue cook can give you his recipe and still beat you with it. And that is why I always tell my barbecuers to experiment. You just might find the next secret to winning.

See ya next month.