The weather was favorable. The campers were ready. Time to camp out at my buddy Scott's place at Quhi, Texas again.

Our Camp Quihi is located where the Texas Hill Country makes the transition to the Texas Brush Country. The land is flat and heavy with vegetation. Scott has spent many years clearing the undesirable plants off the place to make a beautiful home for his herd of Texas Longhorns (cattle -- not UT students).

I arrived shortly before noon on Friday. I found Scott busy unloading his gear and fanning the flames of the campfire that would burn all weekend. Soon, Richard and Barby, the other campers arrived. The four of us made our noon meal with cold cuts and trimmings. Then we set about getting our camp in order.

Midafternoon, Scott set up his tripod and put a large pot of pinto beans on to cook. With the heavy chores done, it was time to catch up on the news. As the sun began to set, Scott put on the chili verde (green chili) he had prepared at home to make sure it was done for supper. Then he warmed up his Dutch oven and made a couple of loaves of pan de campo (camp bread). Scott's pan de campo is essentially biscuit dough cooked in loaves instead of the fist-size biscuits.

Scott has enough experience with his Dutch ovens to know how many coals are required to warm the oven, and then how many to put under the bottom and on top for whatever he is cooking. One trick of the trade is to rotate the oven on the bottom coals several times during the cooking period to compensate for hot spots. A properly tended Dutch oven will bake as well as the most expensive kitchen range.

We dined by the light of gas lanterns. The chili verde was delicious. It was made from the meat of feral hogs that had lived on the campgrounds. The beans were a delight. They would have been a meal in themselves being they contained a whole pound of bacon, among other things. 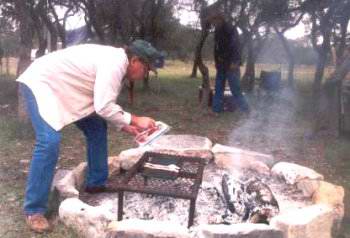 Barby gets the bacon on the griddle

Due to the fact that none of us campers will ever see sixty again, bedtime came early. We had a ceiling of stars and a crescent moon and the coyotes sang lullabies.

Dawn Saturday morning found Scott and Richard working on the coffee. Our camp coffee is made the old-fashioned way. Water is brought to a boil, the coffee is added and boiled as long as we deem proper. The pot is set off the fire and an egg is cracked into it along with the shell. The egg gathers up all the grounds and takes them to the bottom of the pot. The coffee got everyone's pump going, and it was breakfast time.

For some still unexplained reason, the pancakes stuck to the griddle. Several attempts to solve the problem failed, so we hauled out a skillet to finish breakfast. With the large, late breakfast, no noon meal was needed. That night Scott broiled sirloins over the open coals and roasted potatoes in the ashes. Mighty fine fare.

Sunday morning after the coffee ritual, I donned the chef's hat to make my idea of migas. The biscuit mix I had pre-mixed was one hundred miles away in my icebox. Scott had some flour and baking powder so, while chopping miga ingredients, I coached Scott through mixing my idea of biscuits. We didn't have as much flour as I wanted. I had a can of whole-wheat flour in my tack box, so we put in a cup of it to make up for the lack of enough all-purpose flour. One of those serendipity things. Turned out to be outstanding biscuits by accident. See recipe later.

If I say so myself, the migas came out delightful. Along with the surprise biscuits, a bit of jalapeno or red plum jelly and the coffee, everyone ate all they could hold.

After a suitable period of digestion, the campers loaded their gear and left for the big cities, plans for the spring camping at Quihi dancing in their heads.

For variety you may substitute cooked, chopped ham for sausage, or use half and half.