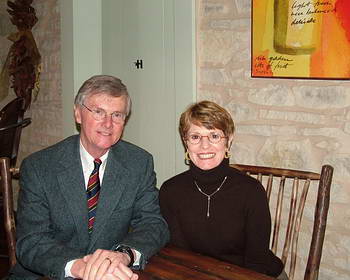 When Ft. Worth physician Patrick Brennan harvested his first crop of grapes, he knew he had some good ones. He just didn't know how good.

He and his wife, Trellise, hadn't planned to make wine. They planted grapes more or less as a hobby. If they survived, they were just going to sell them. Their first crop of cabernet sauvignon, syrah and viognier grapes went to various wineries around the state including the Becker Winery in Stonewall. They had a few left over and thought what the heck; they'd make some wine of their own. It turned out pretty good.

"We decided that if even novices like us, working under extremely adverse conditions, could make good wine out of them, those must be some really good grapes," Brennan explains, with a laugh.

It all started in 1997 when the Brennans, who had been living in Ft. Worth more than 30 years, bought an old stone farm house outside Comanche as their weekend getaway. The house, built in 1879, gave them a place to relax and enjoy small-town Texas life. The 33 acres next door were available so, to insure their privacy, the husband and wife bought them too.

The first five acres of grapes were planted in 2002. To Brennan, the infant vineyard looked like it covered half the face of the Earth. "It was way more than we should have started with, but that's what we did."

Within a couple of years, Brennan had added semillon, malbec, a little more syrah and a lot more viognier to increase his vineyard to nine acres. Then he took the surprising step of starting yet another vineyard in nearby Newburg.

"We did that for a couple of reasons. First, the quality of the soil we had left here was deteriorating as we got away from the original site. We're on deep, sandy creek bed loam. It's beautiful soil. When we put in the first vines, we dug down more than four feet before we ever hit the first rock. That's very unusual for anywhere in Texas."

The second reason was that Brennan's partner owns 1,000 acres in Newburg. "We thought that if we want to continue to grow in the coming years, we'd have a better potential to do it there."

Another, even more surprising, reason for the addition of 13 acres in Newburg was that the land in Comanche was too fertile. "We have a great site here, but we have to fight the excessive vigor that some of the vines have. We can hang a lot of fruit on them, but it's a battle to control the canopy. We thought it would be more controlled in Newburg."

After his initial success, Brennan says he was bitten by the wine bug. "We set about building the winery and went into business in 2005."

Brennan describes himself as an OJT winemaker. "I'm definitely learning it on the job. I've had a lot of help. Bobby Cox, (Pheasant Ridge Winery) an accomplished viticulturist who's been in the Texas wine business for 30 years, helped me initially and now Kim McPherson, (McPherson Cellars) who has another 25 or 30 years experience is helping."

In addition to his on-the-job training, Brennan has taken some wine making courses at Grayson County College in Denison, known for its viticulture and enology curriculum. "We've gotten excellent support from the Texas Department of Agriculture and the state legislature. They've brought in world-renowned professors not only from the U.S. but from Europe and Australia as well. There are first-class educational opportunities at Grayson."

All that help, all that study and all those good grapes have paid off for the fledgling winemaker. In the fall of 2007, his 2006 viognier was named the top Texas wine at the Houston Rodeo & Livestock Show. It was also the reserve champion in the international competition where it won double gold.

"I knew we had some good wine, but that came as quite a surprise."

Brennan made his first muscat wine this year using grapes he purchased from Texas' high plains. "We don't grow muscat canali grapes. We grow Muscat of Alexandria which we use for blending.

"We also make a rosé we call Comanche Rosé. We made that from our semillon grapes."

As with most rosés, Brennan's is a little sweet. "It's hard to be a Texas winery and not make a sweet wine. It's not real sweet but it's something that people who don't like dry wines will enjoy. It's something you can chill that goes well with Texas foods like barbecue or fried chicken."

Current capacity at Brennan Vineyards is 4,000 cases, a number Brennan would like to see grow.

One of the lessons Brennan has learned about making wine in Texas is that you have to take what the grapes give you.

"I would love to make the kind of wines that I personally like which are the big, bold reds. But the fact is, you have to make the kind of wines that you can make from the grapes you have. In Texas we're challenged because we don't have a reliable environment and weather conditions the way they do in the Napa valley, for instance. And so it varies from year to year. In 2006, we made big, bold reds that were wonderful but we couldn't make a lot of it because we didn't have a lot of grapes. This year we made a good bit of wine but the grape quality was not optimal. Our '07 reds are not going to be a bold but will be a better food match.