A Taste of Texas at the White House 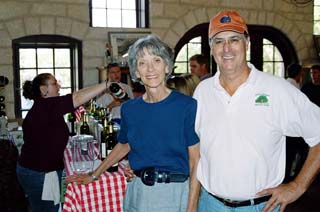 Richard and Bunny Becker collect White House dinner menus the way other people collect matchbooks. "It would be a thrill to get even one," Richard laughs. "We've got six or eight." The Beckers haven't been to those elaborate state dinners but their wines have.

As one of Texas' most prominent vineyards, Becker wines have become staples in the Bush White House. They're also a favorite at the Texas White House in Crawford where Russian President Vladimir Putin was served the winery's 2000 Chardonnay Reserve and the 1999 Cabernet Sauvignon.

"It's very gratifying to have our wines served at the White House," Becker adds. "Mrs. Bush served them in the governor's mansion and when she got to Washington she recommended them to the White House sommelier and he liked them too."

The Becker Vineyard was established in 1992 in Stonewall, just east of Fredericksburg on Hwy. 290. It wasn't long before the Texas wine started winning awards in various competitions, including some in the epicenter of American wine, California.

The owners are as amazed as anyone at the evolution of their winery. "We started looking for a little place on one acre," Bunny explains. "That was in 1990. We were just looking for a little weekend getaway place. Nothing elaborate." The search went on for two years before the Beckers found the right house on the wrong property. 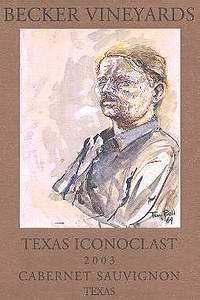 The Beckers bought the land in 1992 and, almost on a whim, started planting grapes.

"We found ourselves between Sister Creek and Grape Creek," Bunny adds. "There were a couple of wineries around so we tried them. Richard has always been very interested in wine and he has a wonderful green thumb. He's always been able to grow things, ever since we were in college."

Richard, like most people, didn't associate Texas with quality wine. He overcame that bias after tasting what was being produced by vineyards surrounding his newly-purchased land.

"Starting a winery was a leap," he says. "But the wineries around us were doing well, growing good grapes, making good wine so it wasn't like we were the first people to plant a grapevine within a thousand miles. Since then, it's had a life of its own," he laughs. "It's been an amazing thing to watch."

Becker, still a practicing endocrinologist in San Antonio, admits he knew nothing about making wine when he imported vines from California.

"But he's a scientist," Bunny adds. "He has the ability to read and remember, which I've always thought was a wonderful gift. We used a consultant from California when we first started. He was working with a lot of wineries in the area back then."

Today, Richard makes most of the decisions regarding the wine but still uses a consultant to confirm his thoughts. "Russell Smith has been consulting with us for about five years now.

"The winery was always set up to work this way," Richard explains. "We have wonderful, intelligent, independent people working here. I couldn't do this without them. We certainly pay a lot of attention to the winery but my focus is still on medicine. I can be here on the weekends, but during the week, I'm a doctor."

Richard explains what appears to be a random approach to winemaking. "Nobody knows yet what kind of wine is the best to make in Texas. We've done a lot of experimentation here. We've planted all five kinds of red Bordeaux grapes. If I could find one or two grapes that are absolutely superior here, that's all I would grow. But you can only find them by growing the grapes and making the wine so that's what we're doing. It's not like you can just look it up in a book. There's not that much history for this part of the world."

Last pour 30 minutes prior to close.

Becker takes a classically French approach to winemaking. "A good wine should be the best it can be. There are a lot of ways to cut corners in winemaking. Generally speaking, the more money you spend on winemaking, the better the wine is going to be. It also means there's going to be less profit. We don't cut any corners. We do everything we can to make the wine the best it can be. We use very French production methods. We've even done barrel testing. We've found that our white wines do better in French barrels but our reds do better in American barrels."

Becker produced its first wine in 1995 with a modest 1,500 cases. Today, with 46 acres of grapes in Stonewall and another 50 acres in Ballinger, 200 miles north, the winery is at capacity with 35,000 cases a year; a level Richard is satisfied with. "I don't want to get much bigger," he says. "We've sold out every year and we've increased production every year and we're still selling out. We've stepped up to what I consider pretty dizzying heights for a small winery and we're going to run out again this year. I'm not interested in growing anymore. This way we can still know all the barrels and all the tanks. Getting much bigger than this means computerizing and that's not something I'm interested in doing."

The future of the Becker Vineyards lies not in quantity but in quality. "We're trying to make our wines better every year. We've learned a lot. We're not perfect but I'm sure happy about the direction we're going in.

"Right now we're making the best wine we've ever made. 2004 was a slightly difficult year agriculturally. 2005 looks like it's going to be an outstanding year. We haven't harvested the grapes yet but I think they're going to be spectacular. We'll know in a couple of years."

Combine sugar and port in frying pan on high heat, stirring constantly. As soon as mixture begins to boil, add pecans and continue stirring and turning pecans to prevent burning. Within five or six minutes, mixture will suddenly thicken and the port red color will begin to darken. Remove from heat, drop and separate pecans onto a greased cookie sheet. Do not touch pecans, they will be extremely hot. Cool for 15-20 minutes.

To serve: Munch like popcorn, crumble on ice cream, add to green salad, use to top chocolate or cheesecake, crumble and sprinkle onto warmed brie wedge.