A Big Name in a Big State 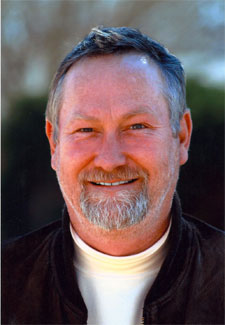 Texas is a big state in a small world. Kim McPherson can attest to that.

McPherson grew up in Lubbock where his dad, "Doc" McPherson, was a chemistry professor at Texas Tech.

When Doc and a partner opened the Llano Estacado Winery in 1976 they were resurrecting a Texas wine industry that most people thought was dead. After all, Llano Estacado was the first winery opened in the Lone Star State since Prohibition. Its subsequent success earned Doc a reputation as the father of modern Texas winemaking. At the time though, the younger McPherson didn't know what a long shadow his father was casting.

"Dad was making wine in the garage back then," McPherson recalls. "I wasn't really paying much attention to what that meant. It was just something for me and the other kids in the neighborhood to sneak in and steal when he wasn't looking." One of those kids grew up to be a banker. He and McPherson would cross paths again a few years later.

After graduating from Texas Tech with a food science degree, McPherson went to work for a food research company. It wasn't a good match. "I didn't really like it much, but my mom told me to stick with it. 'Give it at least a year,' she said. So I did. When they laid a bunch of us off, I decided I wasn't too interested in going back. Dad said I should go out to the University of California at Davis and learn winemaking."

It was good advice. Once he got a taste of winemaking, Kim was hooked. He wound up back in Texas as the winemaker at Llano Estacado, the winery his father had founded. It was then that he heard from that childhood friend who'd grown up to be a banker.

"He was CEO at the bank that was taking over the Cap Rock Winery. They were looking for someone to run it and he said he knew a winemaker. They made me an offer I couldn't refuse and I ended up running Cap Rock for about 16 years."

McPherson had been producing his own wine in California when the call came from his childhood friend. He made it clear he wanted to continue making "McPherson" wine. "I was so busy at Cap Rock that I didn't get back to making my own wine until 1998," McPherson explains. "I think I did something like 150 cases of Cabernet. And it just started getting bigger and bigger. Finally I decided it had gotten so big that I got a wholesaler and I have a broker and I just had to have a home. That's why I had to build this thing."

"This thing," as McPherson describes it, is the McPherson Cellars Winery in what used to be a Coca-Cola bottling plant in downtown Lubbock. Between his time in California and at Llano Estacado and Cap Rock, McPherson has earned a reputation of his own. He and his father were inducted into "Who's Who in Food and Wine in Texas" in 1998. McPherson's wines have won more than 400 medals in state, national and international wine competitions including two double gold medals at the San Francisco Wine Fair.

That success comes from a basic wine-making philosophy McPherson inherited from his dad: Make what you can grow. Doc McPherson was one of the first to plant hot weather-loving Sangiovese grapes in Texas. "I've been on that bandwagon for ten years. I don't make stuff that we shouldn't be growing here on the high plains. I work with warm climate fruit from areas like Spain, Italy, the south of France and the Rhone region. I'm not big on Chardonnay. I don't do Pinot Noir. I don't do Sauvignon Blanc, anything that takes a cooler climate to grow the varietals. I don't do that. I started with Sangiovese, because it loves the heat. And then I went to Viognier, which is a white grape that loves the heat.

McPherson follows through on that make-what-you-can-grow concept by creating Mediterranean style wines. "I've got a dry Syrah rose which is one of my favorites. And I make Tre Colores, which is a blend of Corignon, Mourvedre and Vionier. I also have a Grenache- Mourvedre blend. I'm probably going to blend the '09 Cabernet with Tempranillo and then I have, of course, my famous little DBS which I just started last year. It's Dolcetto-Barbera-Sangiovese. We just call it DBS. It's really taken off."

McPherson takes an equally down-to-earth approach to marketing his wines, directing his efforts at women. "My wines are ready to drink now. My big thing, and I'm not trying to sound sexist here, is to make wines for women. Because women buy about 80 percent of the wines in this country. And they like really nice reds they can drink now. I think I read 86 percent of wines are consumed within six hours of purchase. So you're not wanting to make wines to be put back and aged. I want to make wines that go to the store and you can take it home and drink it."

Market demand is also behind McPherson's focus on red wine, a trend he sees growing. "Women today drink more red wine than ever. Six or seven years ago you couldn't get a woman to drink red wine. It was all Chardonnay and Pinot Grigio. And they still drink a fair amount of that, but they're drinking a ton of red. My production is probably 70-30 red.

"Texas wine makers are going to be making more and more reds. But we've just got to get better at it. Most of the wineries in Texas are boutiques and they don't do a lot and, a lot of times they don't have the facilities to do it right. There are a lot of hobbyists making wine to sell in Texas.

"We've got to improve our quality and look at our pricing. We need to be competitive. It's a global market now. There's still some novelty to being a Texas wine, but it's not what it used to be. Now they put you on the shelf with all the other domestic wines. Some of the winemakers in Texas don't care about that. There's still a Texas section in some stores, but most times they'll put your Cabernet in with the rest of the mix and it's sink or swim."

Texas is still a big state, but the world is getting smaller all the time.