Growing in the Texas Climate 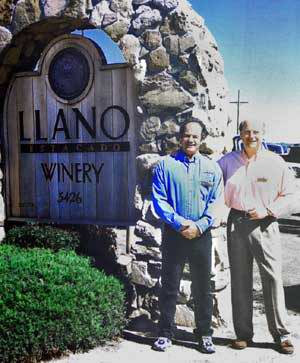 Mark Hyman came to the Llano Estacado Winery just outside Lubbock in 1994 looking for a challenge. The Texas wine industry was in its infancy back then and Hyman wanted to be part of that pioneering effort. He also wanted to get his life back.

"I was running around as a regional manager running distribution in 18 states for what was then Heublein's Fine Wines and I'd spent many years with the Seagram Wine Company before that. I saw this burgeoning industry here in Texas. There was an opportunity to jump in and make a difference. The same thing applied to our winemaker. Greg Bruni is a third generation California winemaker who came to Llano Estacado about two months before I did. He saw the same opportunity here that I did."

In the dozen years since he joined the winery Hyman, who became president in 2000, has seen its production steadily increase to its current rate of 100,000 cases per year making it one of the highest volume wineries in the state. That's a far cry from the 1,300 cases the winery produced in its first year of operation back in 1977.

The winery began in the minds of a group of Texas investors who believed quality wine grapes would grow in west Texas. It was tough going in the early years to convince local farms to plant grapevines. The answer was to build a winery and promise to buy what the local farmers grew. Llano Estacado planted its own vineyard in 1978.

Llano Estacado won its spurs, as they say in Texas, in 1986 when its 1984 chardonnay won double gold at the San Francisco Wine Competition. The winery has won hundreds of awards since then including the 2006 Grand Star Award at the Lone Star International Wine Competition for its 2005 chenin blanc.

Recognition like that is earning Texas wines more respect. "People didn't used to understand that the terroir here can produce good grapes," Hyman adds. "We're not so different from the Rhone regions of France or the Mediterranean regions of Italy."

Established in 1993, the Texas High Plains appellation today covers much of the Texas Panhandle region and, with 3,500 acres under cultivation, is the largest wine grape appellation in the state. Cabernet sauvignon and chardonnay are the most prominent varietals but sauvignon blanc and chenin blanc are also grown. Summers are long and dry in the high plains and evenings cool to 60 degrees or less.

There are few mold, fungi or mildew problems due to the area's low humidity and Pierce's disease is not the threat it is further south. Rain drains quickly in the sandy loam although occasional hailstorms can damage grapes and vines. There are also early and late frosts on occasion.

"We can produce decent styles of cabernet and chardonnay and other grapes that are typically grown in cooler weather, but at the same time (Texas) may exude different styles. That doesn't make them wrong, just a little bit different.

"If you look at California for example and you take traditional Napa Valley chardonnay and compare it to something from the Sonoma Valley on the other side of the mountain and then compare that to chardonnay from Temecula in the southern part of the state, they're all going to taste very different and that's a function of the terroir.

"We have the same thing going for us. People are finally starting to respect that. Our wine may not taste like a Napa chardonnay but that doesn't mean it's not an award-winning product."

Hyman explains that his biggest challenge is expansion. The winery is in a growth phase adding more facilities to increase its production with plans to also increase its distribution network.

"It's a never ending battle. Telling our story and gaining respect outside the state is always a challenge. But that's true for any regionally based agricultural product. We're working hard to give people the chance to experience our wine.

"The majority of the wineries in Texas are still sort of hobbyish in the sense that they sell all their product through their tasting room and maybe in regional marketplaces. There's nothing wrong with that and they can charge more because they're providing that experience to the customer who comes in the door.

"The wineries that have grown beyond that, who are trying to get their product into the market on a statewide or national basis in the major chains and independents and grocery and package stores as well as on-premise in restaurants, have to take a different approach. You have to figure out who you are and how good your wine is on a competitive basis against the wines of the rest of the world. This is one of the most competitive industries in the world because there are literally thousands upon thousands of wineries competing for that finite shelf space."

Hyman says it's important to know your place in the market. "You have to have a plan. You can't just go in and say, 'we're from Texas too. You should support us.' That's not going to work. Buyers want to know what your plan is and what your quality is and you have to be competitive. You have to bring marketing, you have to bring things that are going to help perpetuate your brand and make consumers pick it up and try it."

Another challenge for almost all Texas wineries is getting enough grapes at the right price.

"You have to understand," adds Hyman, "I think at the last count there were about 125 wineries in Texas. The Texas wine industry is growing by leaps and bounds but that means we're all competing for grapes. One of our greatest challenges is figuring out what grows best where and overcoming some inclement weather. That's hard to do. How do you overcome the weather?"