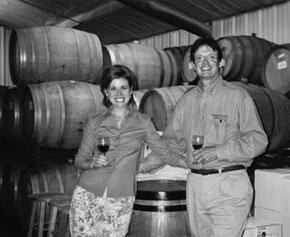 Bill Gipson Sr. knew a good thing when he saw it, or when he tasted it, actually. Combining his love of wine and his training as a geologist, Gipson realized early on the high plains of Lubbock had all the requisites for growing quality grapes, the most important ingredient in making quality wine.

At 3,500 feet above sea level, with plenty of water, warm days and cold nights in the growing season, an occasional freeze in the winter and loamy, calcareous soil where roots can burrow deep and find lots of nutrients, Lubbock is a climatic and agricultural dead ringer for the Bordeaux region of France.

So when he had the chance to buy a share of the Pheasant Ridge Winery he took it.

"The Cox family bought an old cotton farm north of Lubbock and started the winery in 1979," Gipson explains. "They soon realized they needed some substantial funds if they were going to keep the operation going so they took in some investors, including me.

"I tasted the wine they were making in the early 80s and thought it was very good, so I invested with them and eventually became their biggest investor. I retired from the corporate world in the early 90s and ended up buying out all the other investors."

Pheasant Ridge made a splash among wine drinkers when it won a gold medal at the 1986 San Francisco Fair International Wine Competition with its 1983 cabernet sauvignon. It was the first Texas wine ever to win a gold medal in California. The winery won another gold the following year with its chardonnay.

"My interest in wine comes from my background as a geologist," says Gipson. "I started paying attention to wines when I owned some property in California. When Texas started its fledgling wine industry I made a point of going around the state and talking to people and tasting the wine. That's when I concluded, from a geologic standpoint, that the high plains offered the best potential for French grapes."

Pheasant Ridge specializes in French grapes with nearly 50 acres under cultivation. Many of the vines are the original 1979 stock imported from California. The winery grows cabernet sauvignon, merlot and a small amount of cabernet franc and pinot noir. The only white varietals on the property are chardonnay and chenin blanc.

"The two hardiest grapes of that mix are the cabernet sauvignon among the reds and the chenin blanc in the whites," Gipson adds. "They've adapted beautifully to the high plains. They like it up here. Pinot noir and chardonnay have their good years and their bad. They're both finicky and more prone to being affected by the weather."

Almost all of Pheasant Ridge's wines are made from its own grapes. The winery will occasionally buy small quantities of grapes but only from other high plains vineyards and then, only in an emergency. "We take pride that we're estate grown and bottled. Even though we're what you'd call a boutique winery, we're very proud of our product."

While Bill Sr. is modest, almost shy, about the quality of his wine, his son, Bill Jr., is ready to take on all comers.

"Our cabernet sauvignon is our flagship wine," says the younger Gipson. "We also make a reserve cabernet, only about 200 cases a year, that sells for around $20. We take the very best of our cabernet grapes and put them on French oak exclusively. It's an incredible bottle of wine.

"Right now our distributor is finishing off the 2000 reserve cab. When that's gone they'll move into the 2001 which, in September, will also be seven years old.

"I can tell you that Napa Valley estate-grown cabernet sauvignon, seven years old, aged three years in French oak barrels that cost $800 each, is not going to be 20 bucks a bottle. It's going to be $50, $60, $70. I'll brown bag (blind taste) my wine against any seven-year-old Napa Valley cab and we'll hold our own.

"Personally, I'm a $20 cab shopper and there are a lot of good wines in that range. It's just ridiculous to me to see someone pushing their cart down the aisle with Wine Spectator in one hand, turning their nose up at any wines that aren't rated 90 or above."

Part of Gipson's attitude comes from knowing he has a quality product and part of it is based in some frustration.

"The Texas wine industry is a paradox. Texans are fiercely loyal. As a native Texan, I can say we really are almost like our own country. But Texans have not been particularly supportive of Texas wines. And there are several reasons for that.

"Historically, Texas wines just haven't been very good. I think there are something like 136 wineries in Texas now and I can count on both hands the number that are doing a good job."

The reason, Gipson explains, is that wineries are trying to be profitable. Since most Texans like sweet wines, that's what most Texas wineries are making.

"Most of the wineries here are looking at wine making as an economic venture and that, basically, means how many bottles can we move across the counter? My family doesn't look at the winery as a means of support. To us, it's an investment. We're not driven by economic factors. We're driven by making the best wines we can for our palate out of the Texas high plains appellation."

"Our focus right now is to produce the best wines we can out of the vineyard and let the consumers take us wherever it is we're going to go. We do a lot of wine dinners around the country. Our biggest one is at the Houston Club every year. It's a black tie six or seven course gourmet dinner for about 100 people that dad hosts. We've been doing that for about 20 years. And we're involved in a lot of festivals.

"Those are great venues for a small, boutique winery to show themselves off."