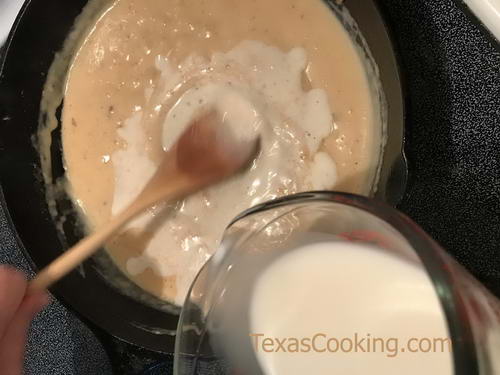 Authentic cream gravy is one of those things that is uniquely Texan, although I understand it has an avid following in Oklahoma as well. Outside of Texas, people either don't know what you're talking about (cream gravy?), or you get some bright yellow gluey substance that's just plain wrong. Cream gravy (or white gravy) is a mandatory complement to chicken fried steak, strongly recommended when making fried chicken and anything else where mashed potatoes is served as a side dish. It's also heavenly spooned over a hot biscuit. And it's not hard to make.

This recipe calls for "pan drippings." These can be the drippings left in the pan from making chicken fried steak, fried chicken or fried bacon. If you haven't fried anything, but just want cream gravy, use half canola oil and half butter.