Day of the Dead: A Time to Eat, Drink and Be Merry 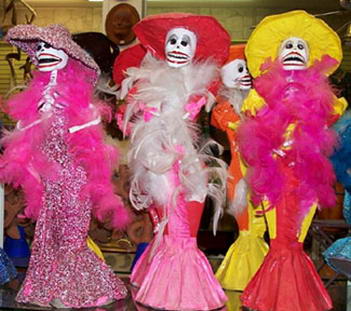 Every year we spend weeks planning and creating themes to decorate our yard for Halloween, an event we absolutely love! Since we live on the main street of our small Texas town, we receive between six and eight hundred trick-or-treaters, which (needless to say) requires our buying candy on the installment plan!

Enjoying Halloween as we do, we're naturally fascinated with the annual Hispanic celebration, Dia de los Muertos or Day of the Dead, which is traditionally observed on November 1 and 2, honoring the passing of both children and adults. So, it's no wonder that this time of year we are drawn to the renowned El Mercado in downtown San Antonio to see the preparations for this annual celebration.

El Mercado or Market Square is the largest Mexican market north of the Rio Grande. It covers three square blocks and is completely inaccessible to vehicles. From the upper level parking lot, you are directed to a stairway that leads down to an indoor shopping mall of 81 shops and six cafes, from which you can exit to an incredible outdoor plaza. You'll find yourself surrounded by fountains, strolling mariachi musicians, dancers, artists, 32 shops, and two of the very best Mexican food restaurants; La Margarita Restaurant ' Oyster Bar and Mi Tierra Café ' Bakery.

The atmosphere at El Mercado is always festive but, leading up to and during the Day of the Dead celebration, you'll see smiling skeletons and skulls, paper garlands, colored lights, bakeries offering beautifully decorated sugar skulls, cakes, Pan de Muertos (Bread of the Dead), and shops selling lively Calaveras figurines and more

But what is Day of the Dead? Is it a Hispanic Halloween? Not at all. This centuries-old tradition is about the continuation of life after death and, although the holiday's exact origin is uncertain, we do know that the Aztecs (along with others native to Mexico) celebrated the event during the 14th century.

The Aztecs honored the goddess Mictecacihuatl, also known as the Lady of the Dead, whose job was to watch over the bones of the dead with the belief that the bones of past worlds were used to create people of this world, and bones of this world would be needed to create people of the future. During the 16th century when the Spaniards defeated them, the Aztecs had already begun calling themselves Mexicas. Through pressure from the Spaniards, the Mexicas converted to Catholicism and, compromising with the Church, Dia de los Muertos was merged with the Christian holidays of All Saints Day and All Souls Day celebrated on November 1 and 2, thus creating a cross-cultural celebration.

Traditional tasks that are still carried on today involve cleaning and visiting gravesites and leaving gifts (ofrendas) of marigolds and the deceased's favorite food and drink, of which the spirits only consume the aromas. The marigolds are thought to attract souls of the dead to the offerings and enable them to join with family members as they celebrate by eating, drinking, talking and telling funny stories about their loved ones.

This centuries-old tradition is about the continuation of life after death.

The modern day Lady of the Dead , La Calavera Catrina,, which means "elegant skull", is reportedly attributed to Mictecacihuatl. Today's Catrina figurines are purposely dressed in lavish gowns with beautiful hats in an effort to show that everyone "puts their pants (or petticoats) on one leg at a time" and are equally susceptible to death regardless of their financial or social status.

The tradition, which extends to the preparation of colorful foods, customarily involves recipes such as tamales, enchiladas, calabacitas, Bread of the Dead, the champurrados drink and sugar skulls.

The next time you're planning a Halloween party, you can borrow from this ancient theme and don't forget to include the great traditional food and drink recipes that follow.

Lightly oil or spray with vegetable cooking spray a 9x13-inch dish or pan.

Using a large pot, bring to boil enough water to cover chicken breasts. Add the salt, half of the onion that is not chopped and the whole garlic clove. Cover and cook over medium heat for about 20 minutes. Remove chicken and set aside to cool. When cooled, de-bone the chicken, discarding the bones and skin. Shred the chicken into strips about 1/4 to 1/2 inch wide and place into a large mixing bowl.

Heat 3 tablespoons oil in a large skillet and sauté the chopped onion and green chili peppers together, remove from heat, cool, and pour into the bowl with the chicken. Add 1 cup of shredded Monterrey Jack or Mexican White cheese and toss to mix.

In a medium bowl, combine the green enchilada sauce and 1 cup of sour cream, stir together, and add about 1 cup of this sauce to the chicken mixture. Place about 4 tablespoons of chicken mixture into each tortilla and roll up. Place the enchiladas, seam side down, tightly together into the baking pan. If you run out of room, place remaining enchiladas on top of the rest. Pour the remaining enchilada sauce over the enchiladas and top with the last 2 cups of cheese. Bake in a 350°F preheated oven for about 15 minutes.

Before placing it on the stove, mix together in a medium saucepan the masa harina and 1/2 cup water, forming a paste. Place the saucepan over medium-low heat, adding the remaining 3 cups of water, and stir constantly until boiling. Reduce heat to low and continue cooking for about 20 minutes until the mixture thickens. In a separate saucepan, add the milk and cook over medium-low heat just until it comes to a boil. Add the chocolate to the milk and cook for about 10 minutes, continually stirring until the chocolate is completely dissolved. Pour the chocolate milk into the masa harina mixture, stirring until well blended. Remove from heat and whip for about 3 minutes with beaters until foam appears on top. Serve with the foam. Makes 7 to 10 Servings.

Mix all ingredients together and serve over ice. Makes 1 cocktail.
Texas Cooking Articles:

In a small saucepan over medium-low heat, mix together the milk and butter until the butter is melted. Remove from heat and stir in warm water.

In a large mixing bowl, combine 1 cup flour, yeast, salt, anise seed and sugar, blending well. Stir in warm milk mixture, eggs and orange zest, mixing until well blended. Slowly add flour, 1 cup at a time to create the dough. Place the dough onto a lightly floured surface and knead until smooth and elastic, about 5 minutes. If the dough is too sticky, add a little more flour.

Place dough in a lightly greased bowl, cover with plastic wrap and set in a warm place. Allow the dough to rise until doubled in size, about 2 hours. Punch the dough down, removing 1 fistful of dough and set that aside. Take the larger portion of dough and place it on a baking sheet, shaping it into a round dome.

Using the dough you had set aside, shape two small, long bone shapes to be placed on top of the dome. Lightly cover the dough with plastic wrap and allow it to double in size, about 1 hour. Bake in a 350°F pre-heated oven for about 35 to 45 minutes. Remove from oven and cool.

In a small saucepan over medium heat, mix together the 1/4 cup of white sugar, orange juice and orange zest, stirring until it comes to a boil. Remove from heat and brush over warm bread . Sprinkle with colored sugar.

So, there you have it! Buenos Dia de los Muertos and remember to eat, drink and be merry!