Near Constant Operation Since 1951

There's a neon sign outside the Mi Tierra Restaurant in San Antonio's Market Square. It glows 24/7 in red defiance of the night. "We never close," it proclaims, proudly. That's not entirely true. 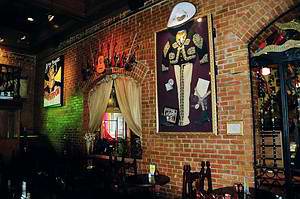 The Cortez family has closed the 500-seat restaurant twice: for half a day on November 22, 1963 when John Kennedy was in town and another half day when patriarch Pete Cortez died. Other than those 24 hours, Mi Tierra has been in constant operation since 1951.

"We've grown a lot and done a lot of renovations since then but we've never closed. We just work around the customers," explains David Cortez, who along with his brothers George and Ruben, operates the family's three restaurants. "We've had to move the kitchen a few times so workmen could install upgrades but we've always stayed open."

Mi Tierra, or My Land, grew by chance out of Cortez's father's meat packing business. "My father, Pete, came from Guadalajara," David says. "His father told him to go to San Antonio to find work. Back then, young men did what their fathers told them to do, so even though he didn't want to leave Guadalajara, he came to San Antonio and started working in his aunt and uncle's grocery store. He bought, cut, processed and delivered meat for them. One day he walked into a little three-table restaurant to deliver some meat and the owner offered to sell it to him for $150. That was in 1941."

Cortez kept his day job at the grocery while operating his first restaurant, called Jamaica #5, from 1941 until 1947. By then the operation had grown enough that he had to dedicate himself to it full time. It wasn't until 1951 that Cortez bought his second restaurant in San Antonio's El Mercado, the city's produce market. "The original restaurant was where our middle dining room is now," David adds. "It was open 24 hours from day one. It probably held about 50 people."

And Cortez made sure it held 50 people as often as possible. The produce market operated around the clock with farmers, hungry for breakfast, arriving with their crops around 5 a.m. The produce brokers arrived later in the day and kept the restaurant busy during lunch and dinner hours. Overnight the restaurant would serve the market's maintenance staff and anyone else who happened to be hungry in the wee hours.

Today, Mi Tierra is as much institution as eatery. The restaurant is the crown jewel of San Antonio's downtown Market Square which features more than 125 shops offering a variety of hand-crafted products from all over Mexico and South America. The family added a Mexican style bakery, a panaderia, in 1955. "We sell a lot of pan dulce and coffee for breakfast,"David says.

The Cortez family also owns La Margarita, another Tex-Mex restaurant in the market, along with Pico Di Gallo a few blocks away.

Mi Tierra has since been transformed into a Mexican version of the Hard Rock Cafe.

"My father bought the property, the whole block, in 1961. Up until then he'd always just rented the restaurant month-to-month. For 20 years, from 1941 until 1961, he didn't even have a lease. So, he was reluctant to put any money into renovations or upgrades. Once he owned the building, he started fixing it up."

Cortez had barely started the renovations when the city's urban renewal team told him the property was part of a revitalization project and was going to be torn down.

"That's when he started getting involved in the community. From 1941 until 1961 he had just focused on his business. When the city told him they were going to tear down the whole market, that's when he became an activist," David explains. "The city had already moved everyone out and leveled a whole block across the street five or six years earlier but had never done anything with the land. He asked them why they were going to tear down this block when they hadn't done anything with the land they'd already cleared."

It took nearly 10 years of work to have El Mercado recognized as an important part of San Antonio's heritage and culture. The area was eventually renovated rather than destroyed.

Mi Tierra has since been transformed into a Mexican version of the Hard Rock Cafe with hundreds of photos along with a large collection of historic mariachi costumes, instruments and memorabilia covering the walls. One end of the restaurant houses the saloon with its massive hand-made bar. A giant mural featuring dozens of notable San Antonio and Mexico residents decorates the other end of the building. The ceiling of the bakery is obscured by dozens of piatas.

The three Cortez family restaurants have sales of approximately $24 million a year with Mi Tierra contributing more than half the total. "We serve a million meals a year here," David says proudly of the family's flagship.

For the salsa: In a pot, boil Tomatoes. In a separate pan with vegetable oil add sliced jalapenos and chopped onions. Fry until tender.

Once cooked, add salt and garlic to taste, and blend together. (Set Aside)

Place Vegetables onto the corn tortilla and roll tortillas.