Barbecue Pits: It's The Pits

Barbecue pits come in all shapes and sizes. From table top to trailer mounted. I have gathered a few photos of pits I think you might find interesting or even puzzling. I guarantee they are all legitimate, working barbecue pits.

This pit, which is probably from the State of Texas, won the first "Manufacturer of the Best Barbecue Pit in the World" award at the International Barbecue Society's "Manufacturer's Championship Barbecue Cook-Off" in the early 1980's. It was built by Larry Gomez Sheetmetal, Inc., Temple, Texas.

The pit is of simple put-the-fire-in-the-bottom-and-the-meat-on-top design. (In photo, left to right, Perry Patronelli, head cook, and Larry Gomez, designer and builder).

The next pit is simple, inexpensive and a winner. Three fifty-five gallon barrels, a couple of stovepipes and some scrap iron. Fire goes in the barrel on left, smoke and heat travel through the pipes to the cooking chamber. Built by LoneStar Cooking Team out of Waco, Texas, circa 1985. 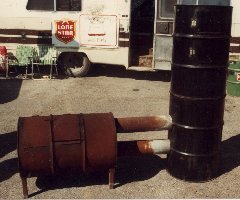 The portable pit. This replica oil delivery truck has the firebox under the hood. Heat and smoke travel through pipes to cooking chamber "Tank" on the rear. Works well and is a real crowd pleaser. Also built by Larry Gomez Sheetmetal, Inc., circa 1985. 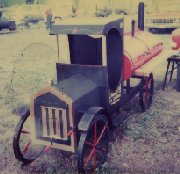 Keep it on track. A railroad theme is always popular at the barbecue cook-offs. This little beauty sat on a length of track. It had a tender car behind the engine pit to hold wood, a gondola car to hold the cooler, and a caboose to hold other essentials. Note "engineer and fireperson" in costume, a good addition to the show. Name of team and point of origin escape me; circa 1983. 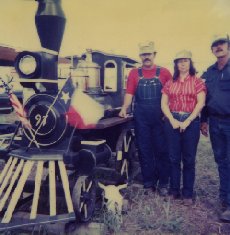 Gotta look good. Here is a typical Texas barbecue cook-off set-up. Trailer mounted pit, left, has built-in shade plus an awning. Nearly everything fits on the trailer for transport. Note the neatly stacked firewood. This is the Wildcat Cook Team out of East Texas, circa 1984. 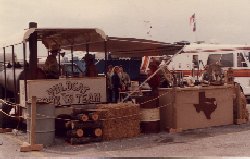 Ready for a cool one? The oversize bottle produces barbecue, not beer. Bottle folds down onto trailer for transport. The "LongNeck Smoker" was at the Houston Livestock Show BBQ contest, circa 1985. 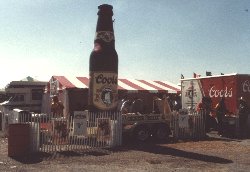 As long as we are in an upright position. Here's a homemade rig that will feed a bunch. Note the propane bottle to fire oversize fish fryer in front of smoker. This rig was out of Taylor, Texas, circa 1984. 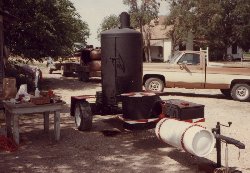 Feed even more. Billy Bones Wall of Red Keg, Michigan, designed this pit. It has rotating baskets inside that will hold several hundred pounds of ribs. The pit is heated by bottled gas, but has a place for Billy's apple wood for sweet smoke seasoning. Billy (in hat) is seen here at the National Rib Burn Off in Cleveland, Ohio, in 1985. 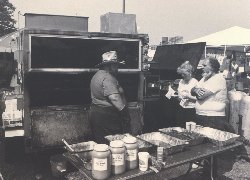 Another large order. This portable pit, the "Roll'n Smoker", was built by Jim Van Marr in, of all places, Sandy, Utah, in the early 80's. The pit featured a system to make steam inside the pit to keep things moist. 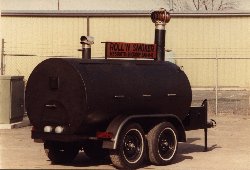 Not such a large crowd? Here is just what you need. A typical Texas trailer-mounted rig with firebox in the rear. Looks like just the thing for that family reunion until you notice that the whole thing is sitting on a card table. Circa 1985. 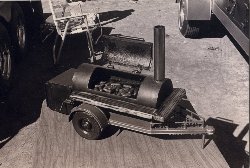 Just you, the wife and kids? Here you go. This skid-mounted model will turn out a half-inch square piece of bacon in about thirty minutes. It really works, note the foil under the firebox to catch the ashes. Owned by the Salt and Pepper Team, circa 1985. 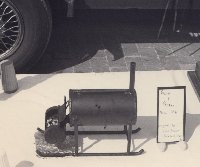 If barbecue were on the menu this day, there would be a grill over the fire instead of the chili pot. The old cattle drives were catered by a rig much like this one. This rig was used by Dr. Sebastian Gomez (pictured) in 1991. The good doctor resides in various places in Central Texas. 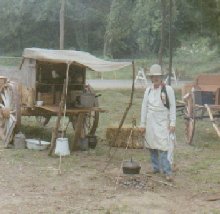