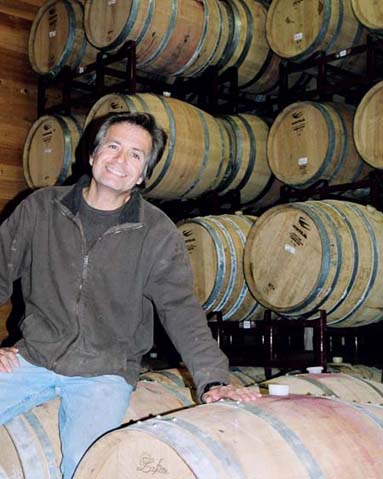 Sister Creek winemaker Danny Hernandez won't be producing any sangiovese or viognier any time soon. He combines a traditional philosophy with modern technique. "I think for us it's more of a European style of wine making. That's from the broad perspective. It's not strictly French or strictly German but those are influences. We're trying to use traditional winemaking techniques and skills to make the most of the grapes that are available to us."

Hernandez says the biggest challenge is trying to make a consistent wine with Texas' inconsistent grapes. "We have a shorter growing season than California or France. Their grapes are much more predictable. We have to keep a very close eye on our pH's and our sugar levels here. The grapes grown in Texas can change dramatically from one year to the next."

Trying to produce a consistent wine with a minimum of manipulation keeps Hernandez on his toes. "Some years you have good maturity and balance and some years you don't. Even in the bad years, we try to be as consistent as we can. We try to avoid doctoring the wine as much as possible. We don't want to fool with it anymore than we have to."

Hernandez had no winemaking experience when he started working on the 42-acre spread. "I was in the army for about five years and during that time I was stationed in Germany. I visited a lot of the wineries there and I really enjoyed it but I didn't know anything about making wine."

He came to the property in 1986 shortly after it was purchased by Vernon Friesenhahn. "I was a student at UTSA (University of Texas - San Antonio) at the time. I was looking for some work during the summer break and put an ad in the paper. I wanted to work out in the country. I did tree service work and was looking for a ranch where I could spend the summer. Vernon saw my ad. He had just purchased the property and was looking for someone to take care of it, clean it up, clear some ground, that sort of thing.

"My original job was as a caretaker. I don't think Vernon ever meant for the property to be a winery. He originally got into the cattle business. He did that for about a year and it just didn't work out.

"That's when he decided to put in a little five-acre vineyard."

"We don't really know what we're going to do with them," Hernandez admits. "We haven't harvested any of them yet. We're kind of waiting to see what happens."

Sister Creek buys most of its grapes from the high plains around Lubbock. They also get grapes from Llano in the Hill Country just north of Fredericksburg.

When he decided to plant a vineyard, Friesenhahn chose not to take on a fulltime winemaker but rather hire a consultant. He contracted California winemaker Enrique Ferro. That's where Hernandez learned the craft.

"Enrique's been my mentor. That relationship has really strengthened my skills."

Sister Creek produced its first wine, a chardonnay, in 1988. "1989 was our first pinot noir. Our sole intention was to stick with the classic wines; chardonnay, cabernet sauvignon, merlot and pinot noir. We had a reisling in 1988 and it was successful but as time went on it became more and more difficult to get the grapes so we stopped making it. We didn't have another sweet wine until 1994."

That's when the winery introduced its Muscat canelli, a slightly carbonated, Italian-style wine. Unlike the winery's reds, the Muscat is aged only in stainless steel tanks.

"We age all our reds in oak. We try not to bring out too much oakiness by balancing the barrels between American and French. We don't use many new barrels either. That allows us to mature the wine a lot longer in the barrel. We're trying to get some of the vanilla character that's in the barrels into the wine."

Sister Creek always blends its reds as well. "We like to add some suppleness by blending merlot or cabernet franc into our cabernet sauvignon. From time to time we'll add some petit syrah. It softens the wine a little and adds some fruity characteristics. It brings a nice balance to the wine."

Hernandez is committed to the winery's conservative attitude about wine but recognizes the need to keep up with the market.

"We're going to stay with those traditional varietals. That's a long term commitment for us. You get comfortable with the style of wine you're making and then you start looking at other possibilities to try to improve the character of it.

"There's always a new wine making philosophy out there. There are new techniques, new yeast strains every year. It's a challenge to go from one style of winemaking to another. Consumer tastes change also. You can't get so stuck in tradition that you don't keep up with the market but we're not going to be dabbling with those new varieties of wines. We're old school."

Saute the onion and sliced garlic. Hand crush the tomatoes into saucepan. Add olive oil, onion, basil and Muscat canelli and simmer sauce for about 35 minutes. Salt and pepper to taste.

Boil pasta, when fully cooked, drain but save a little water to thicken the sauce if needed. Serve with freshly grated parmesan cheese and enjoy.