I'd walk a mile for a complete protein. 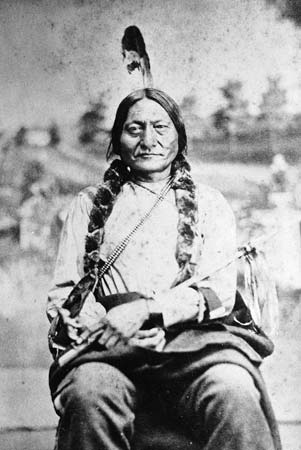 People have been eating in Texas for a long time. As close as the historians can calculate, folks started showing up in Texas about 13,000 years ago. We can only assume that they ate to keep going.

We really don't know much about these original Americans. They were a little different from the accepted profile of the people who trickled over the land bridge from Asia. It matters little here, though, because we are concerned with what they had for breakfast, dinner and supper.

North American Indians were divided roughly into two cultures: the woodlands culture and the plains culture. The plains Indians lived on the vast high plains where the buffalo roamed. In Texas, the woodlands Indians lived over in East Texas where the tall pines grew and smaller animals roamed. There were some Indians who lived on the edges of the deserts. They were sort of the "trailer Trash" of the tribes. Everyone just sort of pretended they didn't exist.

Restaurant at the End of the Plains

The first contact Europeans made with the Native Americans were the Spanish exploring northward out of Mexico. Later, European settlers encountered the woodlands Indians of the East Coast. After that, explorers and settlers coming into Texas found both the woodlands tribes in East Texas and plains Indians where the tree line stops.

The plains Indians' diet was mostly American bison (buffalo). They readily ate buffalo meat both raw and dried. And they must have cooked it up in stews, too.

The woodlands tribes were into farming and cultivated the "Three Sisters," beans, corn and squash. But they were not vegetarians since there was plenty of game like deer, rabbits, squirrels, opossums, raccoons, fish and shellfish from the fresh waters.

In Search of a Decent Meal

The Europeans who came to North America would have starved in a short time if the Indians had not taught them how to survive in the new land.

The first contact between the Indians and the Europeans in the New World was on the East Coast. The Indians there fell into the woodlands classification. These Indians were into farming by the time we showed up. (We all started as hunter-gathers).

The standard method for raising the Three Sisters was to make a mound of dirt about a foot high and two feet across. If you had one handy, a dead fish was buried in the mound to provide fertilizer. The corn seeds were put in the center of the mound. The beans went around them and then the squash around the outer perimeter. As the corn grew it provided a place for the beans to climb, the squash grew on the ground and made a living mulch for the other plants. It was a good system.

The corn was either ground into meal or limed with an alkaline salt to make hominy. The hominy when ground fine became masa, one of the building blocks of southwestern cuisine. Course ground hominy became the ever-popular grits. The southwestern Indians had a dish similar to our modern cornbread.

A person cannot live on either beans or corn alone but, when combined, the two provide a very nourishing food or, to be more technical, a complete protein. The squash, depending on the type, could be eaten raw or cooked.

All three of the Sisters were easy to dry and store for the winter months and hard times. If you keep them dry, they will last for years, requiring only a little water to bring them in to a tasty state.

In addition to their regular diet, the Indians took advantage of most every opportunity. There are hundreds of varieties of plants that are edible. From fruits to leaves to roots, all were used. Dewberries and black berries were favorites in season. They can still be found growing wild along railroad tracks in Central Texas. There are two varieties of native grapes in Texas, but I don't think the Indians were into wine making.