Luckenbach Texas: Then and Now (Part 1)

The Man Behind the Curtain 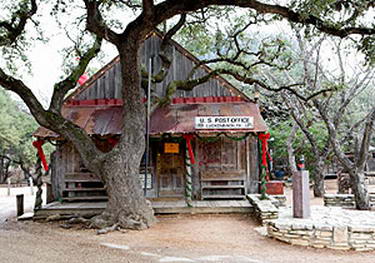 Luckenbach, the most famous little town in Texas and perhaps the world, is no longer a town in the sense of municipality. Today it is a center for entertainment much as is Disney World except on a much, much smaller scale.

In 1854, Minnie Engel opened a store and saloon on the location. A post office was established as South Grape Creek. The post office closed in the 1800s. In 1886, the post office reopened with William Engel as Postmaster and he named the "town" Luckenbach in honor of Albert Luckenbach, who was courting one of Engel's daughters.

The Luckenbach community began to grow. A blacksmith shop and cotton gin were established on the Engel property. By 1896, the population of Luckenbach was 150. The area continued to grow, and the population reached its peak of 492 in 1904. The decline began and, by the 1950s, the population was down to 20. Today the official population is 3.

Luckenbach has always been a center of entertainment. In the early days dances drew in people, as did the events celebrating the singing club and shooting club. There was a large barbecue pit that could feed hundreds of people.

William Engel died in 1935, and his sons inherited the business. The next postmaster was Benno Engel. In 1971, Engel sold Luckenbach to Hondo Crouch, a local rancher and character, who brought in as his partner Guich Koock and shortly thereafter, Kathy Morgan.

Guich left Luckenbach as a working partner in 1973 to pursue a career as an actor. He finished second place in an "America's Singing Cowboy" contest and got some national recognition. He kept working toward his goals and eventually had featured roles in three major television shows. He was in "Lewis and Clark" with Gabe Kaplin, "Carter Country" with Victor French and "She's the Sheriff" with Suzanne Somers. He had parts in several movies and in many television programs.

John Russell "Hondo" Crouch was a rancher in the area raising sheep and goats. Hondo was a brilliant entertainer. He spent a lot more time entertaining than he did ranching. Kathy Morgan was wife of Ken Morgan, a commercial airline pilot. They ran Crabapple Ranch near Blanco and raised registered cattle.

He named the town Luckenbach in honor of Albert Luckenbach, who was courting one of William Engel's daughters. Another major Luckenbach person of importance was Marge Mueller. Marge was "Sheriff Marge". She was bartender at Luckenbach for 33 years. Marge not only sold beer, she ran the town when it needed running. No one argued with Sheriff Marge. She was descended from the original Luckenbach Engel family. Marge would dismiss a customer from the bar for using offensive language. She would supervise parking around the store. Marge could run the bar alone when very large crowds were on hand. At the Great World Fair she got frostbite on her fingers from selling beer out of tubs of ice for 22 straight hours. Marge loved being the bartender. When Luckenbach gave a party in honor of Marge's 65th birthday, she spent the evening behind the bar, and ate her birthday supper between beer sales. Marge passed away in July 2004, leaving a large vacancy at Luckenbach that will never be filled.

Hondo was more than just a Hill Country rancher. He had attended the University of Texas, where he was an Olympic-class swimmer, and he served in the Air Force. His friends from his UT days included Texas Governor John Connally and other officials and politicians. Hondo, as were most of the Hill Country citizens, was a staunch Republican and did not care much for President Lyndon B. Johnson. Hondo had a large following of friends who would drop in on him and his family at the ranch unannounced at most any time. It is said Hondo bought Luckenbach to serve as his Living room where he could entertain his friends.

Luckenbach did not come without obligations, mostly in the form of bills that had to be paid. Luckenbach as a business started out with dances on Saturday nights featuring the popular local Oompah polka bands. The Gillespie County sheriff headed up one of the bands, so Luckenbach got music and security for one low price. Of course, plenty of beer was for sale. There was a choice of Lone Star, Pearl or Budweiser, which was a premium beer and cost a nickel a bottle more. There was soda pop for the ladies and children. The food court was limited mostly to potato chips and once in awhile some dried sausage hanging from the ceiling.

Luckenbach had a flea market open most weekends. Guich Koock began promoting Luckenbach. He was on radio talk shows telling all about the attractions to be found at Luckenbach, such as the zoo with the real pig. Soon weekend traffic began to pick up. Guich and Hondo both played the guitar and sang. Guich sang cowboy songs, and Hondo specialized in Mexican songs. They were quite good.

In 1968, San Antonio had hosted HemisFair, an international exposition with pavilions from over thirty countries. Guich came up with the idea that if San Antonio could have a such a fair, then Luckenbach could, too. Thus was born the Great Luckenbach World Fair of 1972. Guich began gathering entertainment for the fair. The Texas State Cannon Shooting Contest was booked. Many musical minded folks were invited.

The Great Luckenbach World Fair was an overwhelming success. Several hundred people were expected. An estimated twenty thousand turned out. Cars were parked on both sides of the ranch roads leading to Luckenbach for miles in all directions. It is said that nine thousand cases of beer were sold. Kathy Morgan told of carrying around paper bags full of money that day.

The next big show at Luckenbach was the first Ladies State Championship Chili Cook-Off. Frank X. Tolbert, Godfather of Chili, had suggested to Guich and Hondo that, since there was a Texas State Chili Championship for men only, there should be one for the ladies. In October, the chili cook-off drew about twenty contestants and enough spectators to make it profitable. The second edition was set for 1973. Hondo never called the event a cook-off. He called it a "chili bust". He would follow up with, "I always wanted to hold a ladies' bust". The Ladies State cook-off continued to be one of the biggest annual attractions at Luckenbach for over thirty years. Toward the end of the series, so many entrants were showing up that there was not room for all of them. The cook-off moved on to a larger location.

Chiliheads, the people who were involved in chili cook-offs, were always a part of Luckenbach. Some knew and visited with Hondo before Hondo bought Luckenbach. When the town came into the picture, the majority of the chiliheads gravitated to Luckenbach. You could find a dozen or so of them there just about any Sunday afternoon. That was when there were about three dozen chiliheads in all of Texas.

The year 1973 was pivotal for Luckenbach. In the summer of that year, Jerry Jeff Walker and the Lost Gonzo Band recorded the album Viva Terlingua at Luckenbach. Hondo and Jerry Jeff Walker were great friends. Legends were born when the week-long recording session was going on. The album is a Texas music icon. Out of the album came Ray Wylie Hubbard's Up Against The Wall Redneck Mother, which is still very popular. Also out of the album came Gary P. Nunn's London Homesick Blues, which became the Texas National Anthem.

This was the time when Outlaw Country music, fathered by Willie Nelson, started its ascent. Luckenbach became the maternity ward for the Outlaw movement. Every well-known Texas Outlaw star performed at Luckenbach. They were not presented in shows; they would just show up and jam with the rest of the musicians. Sunday afternoons at Luckenbach became the free Outlaw music capital of the known world. Luckenbach started booking Outlaws for the Saturday night dances, and attendance grew considerably.

The next really big show at Luckenbach was in early 1976 when their Non-Buycentennial Day was observed. Hondo was very distressed by all the commercialism of the nation's 200th birthday observance. The Non-Buycentennial celebration featured awards for commercial bad taste. The winner of the Bad Taste City award went to Omaha, Nebraska, for having a bison named Tennial. The number one Bad Taste Award overall went to the Midwest Breeder's Cooperative for marketing Bicentennial bull semen at a "Six for the price of five" sale. Thousands were in attendance and the event drew national attention. The non-protest Bicentennial Day was celebrated on July 4th with the usual Luckenbach foolishness and a huge crowd.

Hondo Crouch died suddenly in September of 1976. His passing was mourned by thousands. Hondo's share of Luckenbach was inherited by his daughters, Becky and Chris.