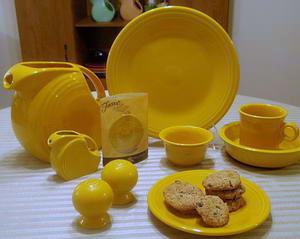 Open afresh your round of starry folds,
Ye ardent marigolds!
Dry up the moisture from your golden lips.

British poet John Keats included in his famous poem a stirring image of beautiful marigolds, lovely flowers which the poem's speaker beholds while planted in a cemetery mourning his deceased beloved.

Regardless of the mortal state of your dinnerware, it is without question marigold will breathe new life into it. This vivacious, yellow color was produced by Homer Laughlin for the 75th anniversary of Fiesta. Starting in April, 2011 and officially ending in September, 2012, it was produced for exactly 75 weeks at the HLC firing plant in Newell, West Virginia, The first pieces produced were place settings and other basic items. Most items also have a special 75th Anniversary backstamp on the back.

The color has sold briskly in department stores, including an amazing marigold soup tureen, which was announned at the International Housewares Show in March, 2011. HLC committed to producing "no more than 10,000 individually numbered pieces". We found one at Dillard's selling for $279. (Perhaps I should have written its number down)

Many people, however, start the collections of a new color with a small fruit bowl, a mini-disc pitcher or a 4 or 5-piece place setting. If you decide to add more Marigold pieces to your collection, you'll admire this lively color for many years to come.