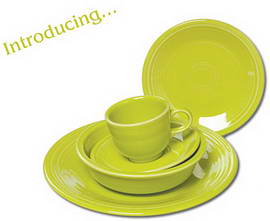 How many different greens can one possibly put on a plate?

According to the folks at the Homer Laughlin China Co., apparently never too many. Often known as HLC, the manufacturer of the ever popular Fiesta dinnerware line announced in 2009 the addition of their fifteenth color, lemongrass. Produced in Newell, West Virginia since 1936, the colorful dishes, bowls and serveware are an enduring staple in American homes, as well as in many restaurants. (Yes, restaurants have taken a shine to Fiesta because this vitrified china is really hard to chip, plus a plate of enchiladas does not look any better when served on a scarlet red oval platter).

The company has created a good business with Fiesta, often called "fiestaware", incorrectly, by customers. Business is so good in fact that the company has added a new color to the line every year since 1986. Their most recent color, chocolate, has been a huge seller.

As to lemongrass, the company notes in its March 22, 2009 press release that they drew inspiration from the color of Michelle Obama's dress at the Presidential inauguration. What if the First Lady had chosen an apricot dress only to discover that her favorite color had been discontinued?

"I thought it was chartreuse when I first saw it." observed Joe Sanchez, a Fiesta collector living in Austin, Texas, who had to compare the new color immediately next to some chartreuse. Chartreuse was produced for two years only, from 1997 to 1999, and has remained very popular with collectors.

This actually raises an important question: Can there be too many green colors in the Fiesta line? There was sea mist produced from 1991 to 2005; then chartreuse, produced for two years. Then the company added the darker evergreen to the line in 2007. (For purposes of this discussion, let us put aside the greens from the original Fiesta line: original green, forest green, medium green and turf green.)

A side-by-side comparison of lemongrass and chartreuse shows that the new color contains a brighter yellow hue. However, it may be useful to purchase and keep some chartreuse on hand (if you can find it) at least for those occasions when exasperated people show up on your doorstep, dish in hand, expecting you to inform them of its true color. 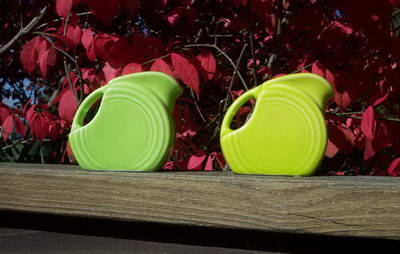 Everybody acutely remembers the soaring energy and gasoline costs in 2007 and 2008. This made things extremely difficult for the HLC, which needs a robust supply of natural gas to fire the kilns that bake their china products. Fortunately, the recession brought relief with lower energy costs. And in 2009, many people have economized by cooking more at home, instead of eating out at restaurants.

This has been good for the company, possibly the only U.S. dinnerware firm still mass producing its products within our borders. Its market positioning and established branding have resulted in department stores like Macy's and Dillard's selling more Fiesta than they have in years. 2008's chocolate color has been a strong seller, and the company clearly hopes that lemongrass continues the trend.

As of this writing, there are plenty of lemongrass Fiesta place settings, plates, serving bowls and disc pitchers available. We expect that lemongrass will eventually be available in other interesting pieces in the Fiesta, such as vases, teapots and canisters.