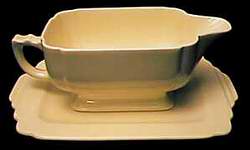 Turn of the Century

Century was a popular dinnerware shape produced in the 1930s and early 1940s. Century is properly referred to as a shape, as opposed to a pattern, because it was always produced in an ivory color.

Its neutral color coupled with its simple but unique lines made it a prime candidate for decoration with decals resulting in many different patterns. The Century shape was used as the basis for the Riveria line, which had solid color glazes.

Many pieces of Century carry the Century name on the back with date of manufacture indicated with a dating code. Many collectors enjoy reassembling the line's many attractive patterns.

One line, Sun Porch, implements a decal showing pieces of Fiesta on a patio table beneath an umbrella. The Mexican-influenced patterns, Hacienda, Mexicana and Conchita to name a few, were very popular, as well.

Below are all Homer Laughlin Century shape auctions, conveniently sorted by those ending soonest. Feel free to bookmark this convenient view, which displays the first 200 auctions at one glance.