This article was published in September, 2007. Wichita Falls Winery was sold to the Scott Poenitzsch family and renamed Horseshoe Bend Cellars in 2017. Please contact the winery for tasting room/tour information.

Alton Gates is a dichotomy. 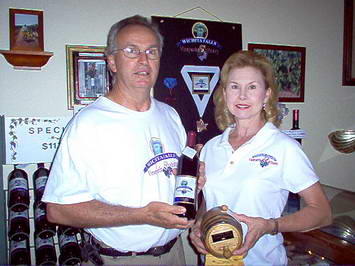 On the one hand, he's enough of a risk-taker that he and his wife, Lana, opened the Wichita Falls Vineyards and Winery because a television show made wine making look like fun. On the other hand, he buys 50 percent of his fruit from out of state just in case the Texas crop is damaged by the state's unpredictable weather.

"We started making wine in 2001," he explains. "In 2003 I was part of a downsizing at TXU (Energy Corp.) so I had to make a decision about whether I was going to look for another job or go into the winery business full time. We'd already put so much time and money into the winery I decided to stay with it." The husband and wife opened their winery in the fall of that year. It wasn’t the original plan for the land.

Gates, a licensed pilot and instructor, was going to use the land as an airstrip. His retirement agenda was to do a little farming and spend the bulk of his time giving flying lessons. He even built a hangar, which is now the winery.

"I was watching TV one day and there was a guy who'd gone to France for two years to learn how to grow grapes and make wine and he said Texas was a good place to grow grapes. I thought, 'I like wine. That might be fun.' That's how it got started.

"I didn't have any winemaking experience before that. I took a couple of enology courses at Grayson (Community College) and worked with a couple of other winemakers but most of what I've learned has just been trial and error."

Gates planted his first grapevines, in what he calls his "test orchard," in 1997 after a vacation in California. "We bought 42 plants while we were out there, brought them home in a suitcase and planted them. They did so well that we planted the rest of the vineyard the next year."

Today the Gates' have just under four acres of vines at the winery and another 30 acres in west Texas where they grow Cabernet Sauvignon, Sangiovese, Merlot, Chenin Blanc, Ruby Cabernet, Chardonnay and Zinfandel grapes.

The winery produces 15 wines under two labels. The Wichita Falls line is made entirely from Texas-grown grapes. The Gates Winery wines are made with fruit from outside Texas. "We don't buy juice," Gates says. "We buy fruit, usually about 100 tons a year, from California and New Mexico. The reason we buy fruit is sort of as a backup. This year, for example, we had a hard freeze around Easter and that destroyed a lot of our fruit. We're just too subject to late freezes and hailstorms so we do it as an insurance policy. If everything gets wiped out here, we still have to have fruit to make a living and we don't want to go out on the open market and start buying bulk wine. Our wine is probably 50 percent Texas grapes and 50 percent other states. Consumers have a right to know what kind of wine they're buying and we're very up-front about it. That's why we have two different labels."

Wichita Red, a slightly sweet blend of Zinfandel, Cabernet Sauvignon and Sangiovese, is the winery's best seller. It won the bronze medal at the Texas Best Wine Competition in 2005, a bronze at the 2005 Dallas Morning News Wine Contest, another bronze at the Texas Open in 2004 and the 2007 Gold Medal at the Lone Star Competition. It also won the People's Choice Award at the Red Rive Wine Festival in 2007. A blush wine with three percent residual sugar is also popular, winning a bronze medal at the San Antonio Express News' 2005 wine competition.

Gates says he prefers to make a fruit-forward wine. All of his red wines are barrel-aged but the whites are all held in stainless steel. "The oak is just too overpowering for the whites," he explains.

The winery produces 18,000 cases a year, a number Gates is considering reducing. "We're self-distributed. Our wines are available from Amarillo to Marshall and from the Red River down to Beaumont and Houston. We're in the Hill Country and San Antonio too. I spend a lot of time on the road. If we picked up a distributor then we might consider getting bigger but I think we'd be pretty comfortable making 10,000 to 12,000 cases a year. If we were to get any bigger, we'd have to have a bigger facility. I probably spend half my time now just moving stuff around so I can work."

Gates says the greatest satisfaction in making wine is the reaction he gets from consumers. "I like making the wine more than growing the grapes. I like making something people enjoy. We have a lot of people come into the winery who start tasting the wine and you'll see this strange expression on their faces. When you ask them what's wrong, they say, 'We have a problem. Usually we try to fine one wine we like. Here we're trying to find one we don't like.'

"It's pretty gratifying to walk into a liquor store or a grocery store and see your label on the shelf too. There are a lot of wines out there. That's not an easy sell."