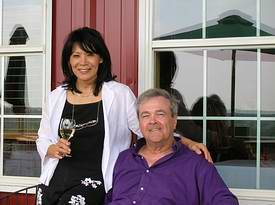 David Hayes learned nearly everything he needed to know about winemaking from his grandfather. "He made whiskey too but I never got involved in that part of the business," Hayes laughs from his Bluff Dale Vineyards, on the edge of Erath County, 45 minutes southwest of Ft. Worth.

Even though most of his winemaking education was at his grandfather's side, Hayes says he learned even more about the craft during his worldwide travels as a salesman for a German company. "This is my second career," he says. Hayes, along with his wife, Theresa, has been operating the winery since opening it in June of 2000.

"When we finally decided to settle down here in Texas in 1991, we had a great desire for wine. We were always sampling wine, whether it was a $5 bottle or a $100 bottle, Theresa and I were always trying different wines. We've traveled all over the world and had all kinds of wine. We'd been making wine at home for years but we wanted to step up to something better.

"I took a couple of classes at the community college in Denison and here we are. That was about nine years ago."

Hayes has several reasons for choosing to open a winery as his second career. Part of it is the fond memories of time spent with his grandfather, part of it is his love of wine and part of it is following in his father's footsteps. "I guess I still have a lot of farmer in me. That comes from my dad. He was a farmer. I like growing grapes.

"Then there's the sales part of it. I've been working with people my whole life. I like being around people and talking to them. So, that's what I'm still doing. I like the people part of the business."

A lot of that "people" part of the wine business is reflected in Hayes' tasting room where he makes sure he gives his guests all the attention they deserve. "You visit some wineries where the person behind the counter pours you a sample of the wine and then just walks away. You're just sort of left there on your own. That's not the way we do it. We take the time to get to know our guests and find out what interests them. Maybe we talk to them too much but I don't think so. We talk about our wine and how it's made and other people's wine and how that's made. We talk about the production process right down to how the grapes are grown."

Hayes describes his wine as fruit-forward and meant to be enjoyed with food. He doesn't compare it to California appellations, saying he has an entirely different philosophy. "We're not trying to make a California wine."

The three-acre vineyard at Dale Bluff is full of two types grapes able to withstand the Pierce's Disease that attacks most grapes in Texas. The Black Spanish and Blanc DuBois grapes Hayes is growing are highly resistant to the pathogen. "Who wants to plant grapes twice?" he laughs. "That's why we chose those."

Hayes says that while the winery has a port available, he doesn't make it. "We've got a couple of wines here that we don't make. With these black Spanish grapes though, I expect we'll eventually be making our own port."

Even with his own vineyard, Hayes buys most of the grapes that go into his annual production of 2,500 gallons of wine. "There are lots of people growing grapes that we can buy. We don't need a whole lot. We make small batches. We generally sell out of the more popular varieties like cabernet sauvignon, chardonnay and merlot before the end of the year. We have a cab-merlot blend that's starting to sell out too." Like most Texas wineries, Hayes' biggest seller is a sweet red wine called Nexus that the vintner recommends with spicy Mexican food. The winery also has a Muscat canelli, a sweet dessert wine, that sells well. Paragon is the winery's red table wine and White Cliff is the favorite white.

It took Hayes two years to find the perfect location for his winery. "I've always wanted a cabin in the woods. I guess this is it. We chose this location for the views. We've got a lot of different topography so you can take your pick. You can see the vineyard or you can look at the hills. You can sit on our porch and watch the sunset and have a glass of wine. We wanted to create some of the experiences we've had during our travels."

Hayes doesn't try to predict the future of his winery. "We're just enjoying ourselves. We have a little wine and spend time with our guests. We're having fun."