A mozzarella-covered mountain called, what else, "The Pig." 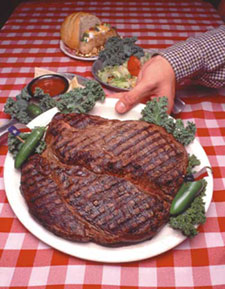 Even people who don′t know anything else about Texas know two things:

And when it comes to big and beefy, there are few places in the world that can compare to The Big Texan Steak Ranch in Amarillo, home of the 72-ounce steak dinner challenge. Down a four-and-a-half pound steak, salad, baked potato, dinner roll and shrimp cocktail in under an hour and the Big Texan will tear up the $72 check.

Bob Lee opened the Big Texan in 1960 and came up with the steak challenge after a real honest-to-goodness cowboy bragged he was so hungry he could eat "the whole darned cow." Lee started cooking and the cowboy started chewing. Nearly five pounds later, both were impressed and exhausted. Lee said anyone who could eat like that deserved a free meal and the Texas legend was born.

Tens of thousands from all over the world have tried and a few hundred have even succeeded. But even the restaurant itself is not sure exactly how many, since a fire destroyed all the records from 1962 to 1991. And while the cowboy who inspired the challenge remains unknown, former New Orleans Saints lineman Elie Ghattas is credited as the first to chew his way to celebrity. He′s on the Wall of Fame three times from 1965 to 1972.

Dan Lee, Bob′s son, runs the operation now. He says they′ve served well over 50,000 of what they call "challenge" steaks.

"It′s just amazing. Some people sit down and polish it off like it′s a slice of pizza. Others get what we call a 'steak stare′ after just a few bites when they realize they′re in trouble.”

Dan′s dad, who grew up in the Midwest, tracks his beef-loving roots back to the family′s four-star Savoy Grill in Kansas City. Like many children of his day, he grew up watching the cowboy movies that played every Saturday at the local theater. The Wild West appealed to him so much he made his way to the Texas Panhandle. Disappointed at the lack of what he considered a genuine Texas steakhouse, Lee decided to create his own, complete with cowboy ambience right down to a horse hotel where travelers staying at the Big Texan lodge can board their steeds.

"My dad was amazed that no one was capitalizing on the popularity of the wild west back then," says Lee. "This was at the time Bonanza and Gunsmoke and all those other westerns were on TV. Everyone was in love with cowboys."

Route 66 was America′s main drag at the time so that′s where Lee set up shop. Fifty years later, the restaurant and hotel, with their familiar long-legged cowboy sign, have been relocated to the more heavily traveled IH-40 and are still a major tourist draw in Amarillo.

"I′m the third of eight children and I literally grew up in the restaurant. I definitely remember there being a playpen in the kitchen pretty much all the time," Lee laughs. "We each had a milk crate with our name on it so we could reach the work surface. And you could always tell who was in trouble. They were the ones scrubbing the dirty pots and pans. It was truly a family operation back then."

Named one of the Top Ten Steakhouses in America by Maxim magazine, the Big Texan feeds nearly half a million people a year. And while the vast majority are there for the beef, there are other items on the menu including chicken, fish and even salads. For the more adventurous there are fried rattlesnake and mountain oysters.

"We′re about 50-50 local and tourist during the winter," Lee explains. "But during the summer I wouldd say about 95 percent of our business is travelers. The locals wait until things settle down a little bit and come in when there aren′t as many people on vacation."

But the Big Texan isn′t just a novelty. Lee says the restaurant ages its meat longer than most so it can serve succulent, tender beef to those who come to Texas, not for quantity, but quality.

"We have ribeyes that are aged for up to 60 days. When people taste those they are amazed at how tender and tasty they are. They ask us if we put anything on the meat to make it taste so good. And we tell them it′s just aged properly. The way dad taught us to do it.

"A lot of restaurants, when they order a case of beef, start cutting it and serving it as soon as it comes off the truck. We don′t do that. We don′t serve what we call 'green′ meat. We take the time to let it age and let the enzymes break down the proteins to give it that great flavor and great texture. We want everyone who eats here, not just the people who have the 72-ounce steak, but everyone, to have a memorable experience."

For the pineapple salsa, in a medium bowl gently stir together the pineapple, mandarin oranges, sweet pepper and picante sauce then set aside.

Trim fat from steak, then thinly slice across the grain. Sprinkle steak slices with chili powder.

In a large skillet, cook and stir half of the seasoned steak in hot oil over medium-high heat for 5 minutes, then remove from skillet and repeat with the remaining steak.

Arrange salad greens on plates, then top with steak and salsa.