Turkey Time: How to Smoke a Turkey

How to Smoke a Turkey 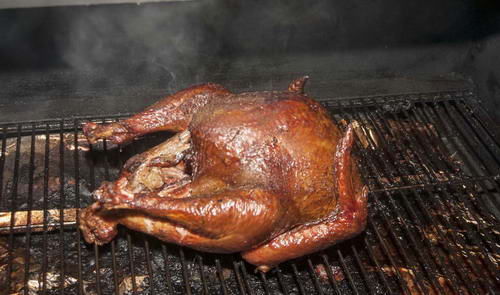 Here we are looking Thanksgiving right in the mouth. So let's fill that mouth with some delicious smoked turkey. We might even throw in a side dish or two if we have the space.

Turkeys come two ways: fresh and frozen. You takes your pick. I see two advantages of fresh turkey. One, you don't have to thaw it out and, two, it's not injected with fat. Oh yes, the "fancy" frozen turkeys are injected with fat to make them juicy. You decide which you want.

We'll start with the frozen pavo (Spanish for turkey). Depending on its size, it will take two or three days to thaw the bird properly. Keep it in the refrigerator -- don't thaw it on the drain board or in the pan of water.

When the bird is thawed, remove the wrapper and everything that is inside the body cavity (usually you will find the neck and giblets there). Save the innards for your gravy or dressing. Give your turkey a good washing inside and out with cool water. Dry it with paper towels inside and outside.

Before we go any farther, take a look at your smoker. Will the whole bird fit inside with enough room for heat to circulate? If so, we'll smoke him whole. If not, it would be a good idea to split the bird so he will lay flat. Use a pair of poultry shears or a good stout knife. Then split him down the breast (I recommend that you remove the spine) and you should have two halves, if my math is correct.

For the whole bird, you want to season him good inside and out with salt and pepper. Any other spices you favor will be fine, too. Slice up a big onion and put it in the body cavity. (I do not recommend smoking a turkey stuffed with conventional stuffing). You might want to put a sliced apple in there, too.

The turkey goes on the pit for six to eight hours at about 250 degrees. You will need to baste the bird with a poultry mop sauce several times during the cooking process. If the skin starts getting too dry, mop a little more often.

The bird is done when the internal temperature of the thickest part of the thigh reaches 165 degrees. If you don't have a thermometer, prick the thigh to the bone and see if the juice runs out clear. If it still has a pink tint, it needs more cooking. When he is done, you will let the bird sit off the fire for about 30 minutes before carving.

If you've cut your turkey in half, it will cook faster than a whole one. You won't be able to use the onion or the apple either, so a little more basting is in order. You should be able to get the halves done in three or four hours. Again, test the thickest part of the thigh for doneness.

I recently read a recipe for smoked turkey that uses a roasting pan. I guess you could call it "pan-barbecued turkey". The process is the same as preparing a whole turkey for just plain smoking. When you get the bird seasoned and the onion inside, you put it in a roasting pan. Fill the body cavity of the bird with as much water as it will hold and then put about a half-inch of water in the roasting pan. You will use a higher temperature with the pan turkey. Anywhere from 325 to 350 degrees. The bird will cook quicker this way. The only disadvantage of the pan pavo is that it will not be near as attractive as the regular smoked one. The back will not brown due to being in the water.

My mother was in charge of potato salad anytime we had a big feed. I continue to use her basic recipe anytime I feel I can afford the calories. You might want to give it a try to go with your smoked turkey.

Boil the potatoes until they are just tender, and then put them in cool water to stop the cooking process. (If I use new potatoes, I boil them whole with skins and then slip the skins and dice them after they are cooked. The russets are peeled and diced before cooking.)

In a large bowl, combine the potatoes, onion, pickles and pimentos. Start with about two cups of the sandwich spread and about a quarter cup mustard. Mix well. If it's a little dry, add a little liquid from the sweet pickle jar. Mix well. Take some in a teaspoon and tell the person standing next to you, "Here taste this, and tell me what it needs". Usually they will request a little more salt. Do this several times. When the answer you get is "Yummm!", cover the bowl and put it in the refrigerator overnight.

I vary mama's recipe by using about a teaspoon of celery seed and some chopped sweet bell pepper. You could use a mixture of red, green and yellow bell pepper to get a really spectacular dish. About a half cup of bell pepper would be right.

The traditional cornbread or bread stuffing and giblet gravy won't pair well with your smoked turkey. They belong with roasted turkey.

I think I would opt for a good sweet and sour barbecue sauce and a not-too-spicy salsa to accompany my smoked turkey. Some fresh-baked white bread would be good, too. Don't dare serve any "brown and serve" dinner rolls. I'll be watching.