This Stew's for You

What Is Stew Exactly? 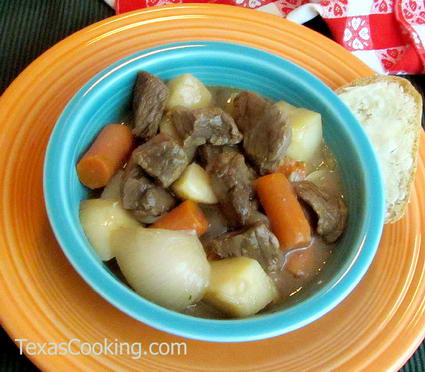 I was wondering what the difference was between stew and soup. After minutes of careful research, I've come to the conclusion that soup is thinner than stew.

Soup is for folks who are not feeling well. You never hear, "I brought you some chicken stew for your cold." Stew is for hearty appetites. The stew can always has a picture of a lumberjack on it.

Then we have your ragout which is defined as stew of meat or fish, with or without vegetables. Apparently you can't make chicken ragout.

If you boil all the liquid off your soup, stew or ragout, you end up with a casserole which is a whole new kettle of fish.

I learned some time ago that butter beans and chicken are very compatible (see Beans R' Us, August, 1998). My pot of bragging butter bean soup started with four skinless, boneless chicken thighs being cooked in about a quart of water seasoned with onion powder, black pepper, celery salt and a dash of garlic powder. If I had them on hand, I would have used fresh onions, chopped, and chopped celery, too.

When the chicken was done, I removed it to a bowl to let it cool. I skimmed the stock, added my presoaked butterbeans, and started them simmering. I get better results simmering beans rather than hard boiling them.

I had a pan of hot cornbread to go with the soup. Mighty fine eating. Leftover soup goes into the icebox, and it really is better the next day.

Another favorite of mine is beef stew. I start out with some good, lean beef. I cut it into about one inch cubes. The beef is seasoned and gets a good coating of flour. The beef is then browned in oil or shortening, drained and placed in the stewpot. The meat is covered with water and brought up to a simmer. In the meantime, I prepare the vegetables. Potatoes, carrots, onion, and whatever else you think might be good, such as bell peppers, turnips, cabbage, cauliflower or whatever. The vegetables are all cut into bite-size portions.

You add the vegetables in the reverse order of how long it takes them to cook. Carrots would go in first, potatoes and or turnips next, then your quicker cooking things. I sometimes put rice in my beef stew. The rice would go in with the carrots. If I add pasta, it goes in last.

I like tomatoes in my beef stew. I put in a can of whole, peeled tomatoes when I start to simmer the meat. Break the tomatoes up with the spoon as you stir. You will probably need to add some water as you go. Always try to use boiling water so as to not stop the cooking process.

Season with whatever you think would be good in addition to salt and black pepper. A little basil -- I said a little -- will complement the tomatoes.

Stew needs to stew a long time. It will probably be done enough to eat in an hour, but another two or three hours of simmering will improve it greatly. Saltine crackers complement your beef stew to a fair-thee-well.

To have really world class stew or soup, you need to use stock instead of plain water. Chicken stock is easy to make. Take the tougher parts of your bird, the wings, neck, drumsticks, backbone and giblets, and put them all in a large pot. Cover them with water and add onion, celery, carrots and maybe a clove of garlic if you like. Throw in some black pepper or peppercorns. Omit the salt for now.

Bring the pot to a slow boil. Keep plenty of water in the pot for now. When the meat is done, remove it from the pot and pick the meat off the bones and use it for whatever. Let the pot continue to boil, but stop adding water. What you want to do now is reduce the amount of liquid and concentrate the flavors.

When you decide the stock is done, (when it's reduced to about half its original volume) strain it into a suitable container and let it cool. Put the cool liquid in the icebox overnight. Next morning the fat will have congealed on top where it is easy to remove. More than likely your stock will have the consistency of Jello. It will thin down when you heat it. There you have your chicken stock ready to make into stew or soup. It beats the heck out of that salty, canned stuff.

You can use the above method to deal with your holiday turkey too. The leftover turkey carcass makes excellent stock. Turkey makes a stock with higher torque than does chicken.

Beef stock requires an extra step to make. Save up the bones and scraps from your beef. When you have a couple of pounds of it, put it all in a shallow pan and pop it into a medium oven until everything is browned. Turn the pieces as required. Then place the meat and bones in your stock pot. Be sure and add all the scrapings and juices from the pan you had in the oven. From there on, it's basic stock making. Use onion, celery and carrots, plus black pepper for seasoning. Again leave out the salt. You salt the end product, not the stock.

For those of you that live near water, I assume fish stock would be made very much in the same way as chicken and beef stock. Us old Texians never acquired a liking for fish stew, we think God only meant for fish to be fried, that's why he give us hog lard.