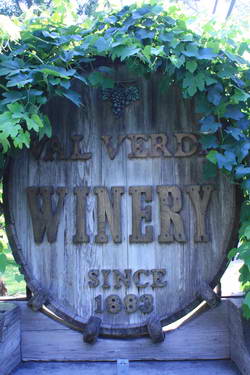 Michael Qualia's not quite sure how to refer to himself. He's not ready to call himself the owner of the Val Verde winery in Del Rio. That's his dad, Tommy. Michael's willing to wait his turn to run the winery his great-grandfather founded in 1883. For the time being he's content to be "the guy who does anything that needs doing, whether it's driving a tractor or working on the bottling line."

Frank Qualia brought a tradition of winemaking with him when he immigrated to the United States from Italy in 1883. He found Black Spanish (Lenoir) grapes flourishing in the hot west Texas climate and knew just what to do with them. Fortifying the juice with grape brandy, he started making port wine. Those Black Spanish grapes are still the dominant varietal at the Val Verde Winery, which is best known for its Tawny Port.

"If you ask people what they remember most about visiting our winery," explains Qualia, "I would bet most of them would say the Don Luis Tawny Port. Whether they visited 25 years ago or 25 minutes ago, that's what everyone remembers." The Val Verde Tawny Port is marked by the typical brown/copper hue and has aromas of toffee and coffee. It features a warm taste of oaky vanilla and has a long, smooth finish.

Val Verde has 14 acres of Black Spanish grapes on the property and is beginning to experiment with Blanc Du Bois, another Pierce's Disease-resistant varietal. "That's something you have to think about," Michael adds. "Pierce's Disease is a real factor in Texas. We get the vast majority of our grapes from the high plains around Lubbock."

That grape-buying trip to the Panhandle is not an uncommon practice among Texas winemakers. The cool nights and sandy soil of the high plains make it perfect grape growing territory, especially for the new darling of the Texas industry, Tempranillo grapes, another Mediterranean Pierce's Disease-resistant varietal.

Frank Qualia passed the winery on to his son Louis in 1936 and Louis handed it off to his son, Tommy in 1973. It was Tommy who took it in a new, more modern direction. "We're still making the wine my grandfather made," Michael says. "But my dad expanded the line. With more and more vineyards in the state the availability of fruit is a lot better than it was 25-30 years ago. And there are a lot more interesting varietals like Tempranillo and Sangiovese. When we can get fruit like that we're able to do something a little different."

But it's not just a matter of calling up the local vintner and placing your order. Tempranillo grapes are hard to come by and wineries are competing for them. "There are a lot of people growing Tempranillo now but they've only been at it for a couple of years so the yields aren't all that huge. 2010 was a very good year for Texas grapes so there are plenty to go around this year. We're like everyone else, we have to compete for the grapes that are available. I'd say 90 percent of the crop is already spoken for before it's even harvested."

The oldest continually operating bonded winery in Texas, Val Verde could still be considered a boutique with an average yearly production of between 3,000 and 3,500 cases. Qualia estimates 20 percent of that yield goes into the flagship Tawny Port with the rest being divided between the winery's other varietals such as Chardonnay, Sauvignon Blanc, Sweet Red, Texas Rose and Val Verde's biggest seller, Muscat Canelli. The winery also produces a Cabernet Sauvignon, Sangiovese and Pinot Noir.

"Our white wines are very drinkable right out the door," Qualia explains. "And our reds are aged anywhere from 18 to 24 months before they're released. And the Don Luis Tawny Port is aged even longer because of it's high alcohol content.

"I'd say somewhere between 75 and 80 percent of our wine is sold through the front door, to people who visit the winery. We have some distribution to local restaurants but we're really selling the vast majority of our wine through the tasting room," says Qualia.

One of the highlights of the tour of the Val Verde Winery are the photographs of the generations of Qualia's who have been involved in its evolution. "We remember and respect where we came from," Michael adds. "We're dedicated to producing wines of excellent variety and quality. Many of our wines have gained the attention of serious connoisseurs, particularly the Don Luis Tawny Port, which has won medals from Texas to New York."

The winery has expanded over the generations but is still centered around the original adobe building with its 18 inch-thick walls.

Michael's sister, Maureen, is currently in California, where she earned her master's degree in winemaking at Fresno State. "She's worked in a couple of wineries out there and I expect she'll be back here sooner rather than later. She's getting that experience that's going to make it pretty easy for her to step in here as winemaker when she's ready."

Leaving Michael as "the guy who does almost anything that needs doing." 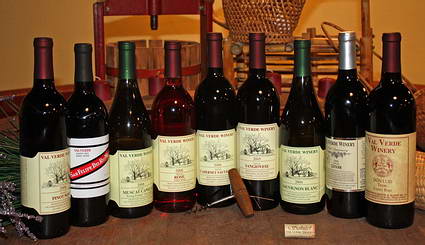 In the meantime prepare the sauce: