A Special Vineyard in Stonewall, Texas 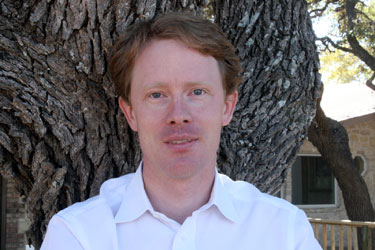 Fredrik Osterberg and David Kuhlken thought they were going into the wine business back in 2006 when they broke ground on Pedernales Cellars in Stonewall. Little did they know the hillside on which Kuhlken's parents, Larry and Jeanine, had chosen to plant their 17 acres of grapes back in the early 1990s would turn into the marriage proposal capital of Gillespie County.

"We have a little loveseat up on a hill with a broad, sweeping 180-degree view of the river valley," Osterberg explains. "I know of at least three proposals that have happened there in the last three months."

Osterberg seems even more surprised than the potential brides by all the romance in the air. "Our focus is on the wine. We don't have meeting facilities or a wedding chapel or any of that sort of thing. We've had a couple of weddings here but that's just because the scenery is so naturally beautiful, not because we set out to be a wedding site."

What the co-owners and brothers-in-law set out to do was create the best wine they could as naturally as they could. Like all winemakers, they're focused on reds and whites but these partners are also interested in green. They want to have as little impact on their wine and the environment as possible.

That's one reason they went to the time and trouble to dig the largest wine cellar in Texas underneath their winery. The limestone walls of the 4,800 square-foot cavern keep the wine at a constant, coolish temperature meaning less refrigeration and less electricity. And aging their wine on the lower level of the site also means they can let gravity do at least some of the work of moving their inventory from one place to another.

"We can keep the temperature very stable with a minimal amount of energy and that's an important part of our operation," Osterberg says. "We also don't want to pump the wine anymore than we have to. We try to avoid that kind of harsh treatment of the wine. The less machinery it comes into contact with, the better."

Technology runs the gamut at Pedernales Cellars, from simple gravity-feed transportation to a state-of-the-art geothermal cooling system circulating water deep underground to keep things comfortable for both the wine and the patrons during a toasty Texas summer.

The limestone walls of the 4,800 square-foot cavern keep the wine at a constant, coolish temperature meaning less refrigeration and less electricity.

That respect for their product and the environment comes through in the company's winemaking philosophy. It's all about class, not mass. "We're planning on about 3,500 cases for this vintage," says the owner. "I don't think we'll be getting a whole lot bigger. We're a very small, very boutique operation. If you compare us to some of the other winemaking operations in Texas, the big boys are ten or twenty times our size. We want to stay small and beautiful."

As the Texas winemaking industry continues to grow, Osterberg and Kuhlken are aiming for a position in the upper echelon. "Our focus is on a fairly complex wine. There's a very established wine industry in Texas, but there are only a few of us aiming for that high end of the market."

"Our wine is very drinkable now but it will benefit from some aging. Our 2007 Family Reserve is an example. It will probably peak in 2014 or 2015. That's what we're aiming for."

"We use both French and American oak barrels to age our wine. The kind of barrel we use depends on the kind of wine we're making.' Most often the wine they're making is their flagship Pedernales Cellars Family Reserve, a wine Osterberg was advised not to make.

"When we opened our tasting room in December 2008, I put out the tasting sheet with some prices listed on it," he explains with a chuckle. "Our Family Reserve sells for $49 a bottle. I'm not going to mention any names, but let's just say a prominent figure in the local wine industry came up to the me and said, 'Fredrik, you're smoking dope. No one is going to pay $49 for a bottle of wine from Texas.' Every time I see him now I remind him that the wine he said no one would pay $49 for is our number one seller."

Osterberg also bucked Texas tradition when he chose not to make a sweet wine. "Everyone told us we had to make a sweet wine, but we're doing very well without one. Maybe that's a sign of the Texas wine industry maturing." The winery does offer a Muscat Canelli under its Stonewall label.

The owners of Pedernales Cellars not only respect their environment, they make the most of it. Instead of trying to grow grapes meant for cooler climates, they concentrate on fruit that thrives in hot weather. "We have to focus on the kind of grapes and the kind of winemaking that makes sense in our climate. We have tourists at the winery every day asking for Sauvignon Blanc. And we have to explain to them that we could make Sauvignon Blanc but we've decided to stick to what we can do really well."

And that means Mediterranean region grapes like Tempranillo, Touriga Nacional, Monastrell and Garnacha, along with small crops of Cabernet Sauvignon and Merlot. And while trying to minimize their use, Osterberg admits glass-winged sharpshooters [insects] spreading Pierce's Disease throughout Texas have forced him to resort to pesticides in the vineyard, something he hopes to be able to reduce even further in the future.

Distribution of the boutique's selection is limited to the winery's website, tasting room and restaurants in the Hill Country where it's growing in popularity. "The response from restaurants in particular has been very good. Especially for our Tempranillo. If a restaurant already has 50 Cabs on its wine list, then a good, solid Texas Tempranillo stands out a bit."

As for the future, both Osterberg and Kuhlken are looking forward to bringing along the next generation of wines and winemakers at the family-operated business.

"We'll never really be big," Osterberg concludes. "We'll increase our production a little from what it is today, but we want to stay small. We're going to bring out a couple of new wines and continue to develop the ones we have. So far, so good."

Osterberg and Kuhlken may be laying out the strategy for the future of the business, but with their commitment to sustainability, a sensible vineyard philosophy, wines that can be enjoyed today and years from now and the little loveseat on the hill, they can pretty much count on the next generation of loyal customers to take care of itself.

Cut catfish in 3-inch pieces. Season lightly with salt and pepper. Coat with breadcrumbs. In 12-inch skillet, cook catfish in hot oil 6 to 8 minutes, turning once, until golden and fish flakes easily when tested with a fork.