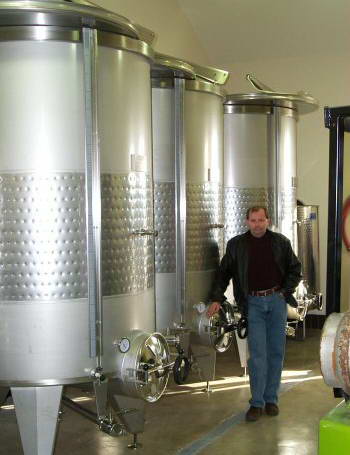 Emilio and Maria Ramos are quickly going from one end of the education spectrum to the other. Maria has quit her job as director of financial aid at the University of Texas – Dallas so she can concentrate full time on running the San Martiño winery that she and her husband opened in 2004. Emilio is still the director of technology for the Dallas County Community College District but spends his nights and weekends in Rockwell with his wife learning all they can about running a thriving winery.

Emilio learned to make wine back in Spain from his grandfather but before opening his own winery it was just a hobby.

"His family has been in the wine business for generations," explains Maria. "We could see that tradition pretty much dying out with his grandfather so we decided to revive it in his memory."

The couple found the land they would turn into a winery more than four years ago. "It was just a plot of land. There was nothing there. We cleared it and now, four and a half years later, we're expanding again."

San Martiño, named after Emilio's home in Spain, produced only 1,500 cases its first year. That grew to 2,000 and today production is at 4,000, a number that's expected to grow with the next harvest. "We're looking at 6,000 cases this year," Maria adds.

While the Ramoses had intended to grow their operation, they hadn't expected it to be this fast. They estimate they're about five years ahead of schedule.

"The community accepted us really well and the wine has been selling well so we're expanding more quickly than we had planned," says Maria. "We have a new production facility that's about three times the size of what we started with."

Only a half acre of the winery is being cultivated meaning the Ramoses buy most of their grapes. Grapes from Texas and California go into San Martiño's barrels in more than a dozen styles.

San Martiño's wine making philosophy is based on maximum extraction with minimal intervention. While the wines are meant to be paired with food, Ramos says the cabernet sauvignon can be cellared for up to 15 years to add complexity.

"Our philosophy is to allow reds to have their full flavor and robustness by not filtering them and permitting our white wines to fully develop by not rushing fermentation.

"Our reds are bold but smooth. We like our reds to be dry but we understand that everyone has a different palate so our wines range from a sweet blush to a very dry cabernet franc."

The success of the winery, while welcome, has been a surprise, even to the owners. "We were surprised at how well our cabernets and zinfandels have sold," Maria says. "We have our version of the super Tuscan which is 60 percent sangiovese and four percent cabernet that's also selling well. We have something for everyone. Even people who have never had a glass of wine in their life will come in and find something they like.

Tasting closes to the general public
at 5:00pm during music events.

"We were kind of surprised that this really works. We've met some neat people because of the winery.

"The rapid growth has been a little scary but sometimes, if you think about something too much you never do it. You might as well have a glass of wine and go for it. The worst that can happen is that it doesn't work. But, at least, you tried."

Texas' unique configuration of dry counties where no alcoholic beverages can be sold and wet counties which allow alcohol sales, was also a surprise to the Ramoses.

"I grew up in Chicago," Maria explains. "There aren't dry and wet areas there. Everything's wet. Here, there are dry places right across the street from wet ones. It's taken a little getting used to. There aren't a lot of wineries in this area so we've had to sort of learn as we go. We've learned all the rules and regulations as they came up.

It's not really and obstacle but it can be confusing."

The winery has an events center where it hosts weddings, corporate meetings and parties and is planning to add a bistro during its next expansion. "We feel like we're sort of the "Cheers" of the Rockwell area. It's a fun place to hang out," says Maria.