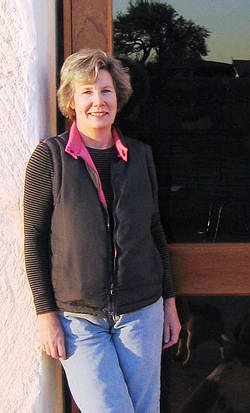 Growing up in southern Australia's Barossa Valley, one of the country's most prolific wine making regions, it never occurred to Angela Moench that people did anything other than make wine. Everyone was a vintner and there were grape vines everywhere she looked. Even her own family has been in the wine business for generations. It's not surprising then, that when she came to Texas, she brought that attitude with her.

"I've been involved with wine my whole life," she explains. "Either making it or drinking it."

Today, Moench and her husband, Howard, a Houston physician, are the owners of Stone House Vineyard in Spicewood, where, even though they're influenced by Angela's Australian roots, they're making pure Texas wine.

Moench acts as the winery's general manager while a fellow Aussie, Vicky-Louise Bartier, makes the wine. And they're doing it all using only one type of grape.

"We're making something of our very own," Moench says. "Our wine is a true expression of our location. Being on Lake Travis, we chose Norton grapes because they're at least tolerant of Pierce's Disease. Plus we wanted to do something a bit different."

Moench is certainly doing something different. First, she's making only two types of wine and neither one is sweet, a proven favorite among Texans. And secondly, by planting only one type of grape, she's essentially putting all her eggs in one basket. A basket that may very well die. The Texas Hill Country has been infected with Pierce's Disease since 1996 when it was introduced by insects called glassy-winged sharpshooters. While Nortons are resistant to Pierce's Disease, a pathogen that kills most varieties of grapes, they're not immune. They may eventually succumb. Until then, Moench and Bartier are using the grapes to make only two types of wine.

"We make a red wine called Claros and a port," Moench says. "I'd describe Claros as being close to a Pinot Noir. It has that sort of softness to it. I'd actually like it to be a little more full bodied but that's going to vary from year to year."

Much like Texas' weather. Stone House makes only estate wines meaning the Moenchs don't buy any grapes. They only use the ones grown in their 6.5 acre vineyard. That's another risk they've decided to take. With Texas' unpredictable weather, it's possible to lose the entire crop, something that nearly occurred in '07.

"You just have to accept the weather," Angela says, philosophically. "There's obviously nothing I can do about it. You just have to go with the flow. You get these violent spring storms with golf ball-sized hail that snaps everything off. That's happened to us twice now. Or you get the situation we had last year where you get 24 inches of rain in six weeks and everything rots."

The 2007 crop was so badly damaged that the winery was able to produce only about 400 cases, half its intended volume.

Stone House Vineyard evolved from a vacation home the Moenchs had on Lake Travis in 1999. "We didn't have this great business plan," Angela laughs. "Part of the idea came from the romance of having a winery and my background. I've always been very much into plants and that sort of thing. It just became a rather natural progression once we had the land that it evolved into a winery.

"I would have to say it was more circumstances than anything else. You know how things just evolve in life. Opening a winery wasn't something we set out to do in life. It was something that just evolved."

The Moenchs started making wine offsite while they built Stone House, which is named after Angela's family's vineyard in Australia. The Texas Stone House opened in 2005 and sells both the American and Australian versions of Stone House wines.

After 30 years in Texas, Angela says much of it reminds her of her native Australia. "The people here are terribly friendly just like back home and a lot of the terrain is the same and the hot summers. The weather is also different. The Barossa has a true Mediterranean climate meaning it rains in the winter and has dry summers. Here, it's just completely unpredictable."

While the weather may be unpredictable, Angela says the payoff of making a great wine is easy to foresee.

"It's very rewarding. There's something wonderful about planting a vineyard and then, three years later, picking the grapes and then two years after that, drinking the wine. There's a real sense of accomplishment to that. The whole thing is a way of life. It's all-encompassing, and most enjoyable."

Qing Qings Back In The Pot Pork

Bring a saucepan of water to a rolling boil. Add the pork belly and then simmer until cooked through and juices run clear. Drain and set aside to cool.

Cut the pork belly into fairly thin slices. Cut the spring onion greens into quarter-inch sections. Cut garlic cloves in half and thinly slice the ginger.

Heat a wok over a high flame until the smoke rises Add oil and reduce to medium heat. Add garlic and ginger and stir-fry until fragrant. Add pork slices and continue to stir-fry until they sizzle.

Add the black beans, soy sauces and salt to taste and continue stir-frying until the beans are fragrant. If at any point the food starts to catch a little on the base of the wok, simply pour in a tablespoon or two of stock or water and mix well.

Add the chiles and spring onion greens. When the onion is barely cooked, remove the wok from the heat, stir in the sesame oil and serve.