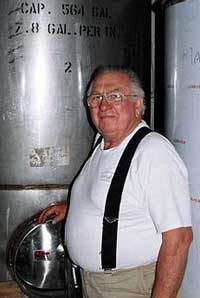 It’s easy to find Cypress Mill. It’s just west of Hammett's Crossing and east of both Blowout and Sandy, Texas. To the north is Round Mountain and right in the middle of it all is the McReynolds Winery.

Better known as Mac, Gerald McReynolds isn’t sure how many careers he’s had so far. He’s been a computer engineer, a research assistant, a sailor and an airport manager and a minister. Currently he’s a farmer, mechanic, electrician, builder and wine maker.

But there’s a gap in that list that he’s not quite sure about. About all he can remember from 1990 to 1993 is falling out of the back of a truck in Australia.

"I was working on my Ph.D. in geology at the same time. I was also involved in the creation of Maniac III, the first solid state computer. Maureen had the opportunity to do post-doctorate work at the University of Texas so we moved to Austin. After only about a year her lead professor died. Maureen tried to get a teaching position at UT but there were no female professors here back then. She ended up taking a research assistant position at Stanford University in Palo Alto, California."

That trip to California was the beginning of the McReynolds’ adventure in wine making. "We’d visit wineries on the weekend and just fell in love with it. Maureen took a few wine making courses at UC-Davis and we started making wine at home. I still have the old hand-operated corking machine we used to use." Mac’s problem-solving skills got him involved in the wine making industry when he started engineering equipment to solve some of the problems vintners were facing at the time. Maureen’s efforts weren’t as successful. She was told in no uncertain terms that women would never be winemakers, a statement that’s been disproved numerous times since.

The couple moved back to Austin when Maureen was hired to manage the city’s environmental department.

Still eager to be involved in the wine making industry, Mac built the modest winery in tiny Cypress Mill himself in 1982. Back then, it was known as Cypress Mill Winery and had a different owner. After building the winery, installing the equipment and making the first batch of wine, Mac was told his services would no longer be required.

"I did all that work and the owner ran me off," Mac chuckles. "Well, sure enough, in 1989 I got a call from the bank telling me that the winery was going to be auctioned off on the courthouse steps."

Shortly after buying the winery he had built, McReynolds made a trip to Australia, a country he’d visited earlier. "I’d been there in 1986 and met a winemaker who taught me how to make shiraz. Now that I owned a winery, I was eager to go back again to learn what I could.

"I have to say, Australians are true Texans. They may talk funny and drive on the wrong side of the road but they’re Texans at heart. They meet you with a glass of wine and a g’day. They know everything there is to know about hospitality."

McReynolds learned more than he could have ever imagined on the trip. He was riding in the back of a farm truck with a few ranch hands on their way to repair a piece of heavy equipment when the driver swerved and he was tossed out.

"The next thing I knew I was in a hospital in Adelaide. They tell me I was airlifted there but I have no memory of it. I was in intensive care for a week and then in the hospital for another month before they let me come home. When I got back here I had to have six years of therapy trying to restore my memory."

Not only was his memory erased, so was his education. McReynolds had to learn to read and write all over again. In the summer of 1990 he found himself the owner of a winery he didn’t know how to operate.

While still in therapy in 1995, Mac made a shiraz with grapes he purchased from the UT vineyard in west Texas. "It must have turned out pretty well because it won first place at the Texas state fair. That's back when they still had wine competition at the state fair."

The McReynolds Winery is still buying its grapes and producing about 2,000 gallons of wine a year. Mac doesn’t bottle shiraz anymore but is currently making chenin blanc, sauvignon blanc, a blush wine called Rose of Chenin and two cabernet sauvignons with grapes from different vineyards.

Tucked away at the end of a dirt path off of Farm Road 962, the winery has picnic facilities and a small, informal tasting room where Mac, now 74, and his wife supply the wine and memories that aren’t likely to be forgotten.

Heat the shortening in a skillet over medium-high heat. In a bowl, mix the flour, condensed soup, seasoned salt, pepper, and salt. Dip chicken in the mixture to coat, and fry in the skillet until golden brown.

Place chicken in a slow cooker. Mix the chicken broth, brown sugar, and orange juice concentrate in a bowl, and pour over chicken in the slow cooker. Cover, and cook 2 to 3 hours on Low or 1 to 2 hours on High.