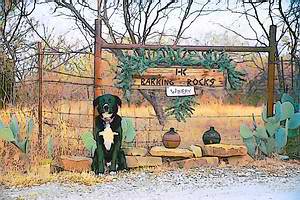 It’s difficult to imagine anyone in the Texas wine industry having more fun than Tiberia. A free spirit who visited Texas on a whim in 1977 and never left, he’s squeezing as much juice as he can out of life and grapes.

"I was schooled in Connecticut and ended up in California. As an adventure, I took a train trip to Texas with a backpack and a guitar. Once I got here I found some good people and some good work and I just never got around to going back."

After retiring from Texas Utilities (TXU) where he was a human relations manager designing compensation programs, the son of Italian immigrants dropped his first name and started making wine.

"When I got into the wine business, I thought Tiberia sounded more like a wine maker, more European. So I left my first name behind," he explains.

He and his wife and partner, Sissy Andrews, a native Texan, founded their Barking Rocks Winery in Granbury in 2002 but didn’t open the doors to the public until 2004. Tiberia looks back on those first two years as perhaps the best since all he had to do was make wine.

"There’s a lot of ways to approach this business," he says. "I didn’t want to sell other people’s wines. I’m making between 600 and 800 cases a year. I think that’s my sweet spot. I intend to stay around that level. I’m not really interested in market share. I want to take time off so I can make more wine. This is a second career for me."

Tiberia started that second career after meeting a few other Texas wine makers. An avid hobbyist, he began attending wine conferences around the state and met some professional vintners. "The more I started knowing the people in the business and the more I started hanging around with them, I realized these are the people I want to spend my time with."

When TXU offered him an early retirement package, Tiberia, 53, jumped on it.

"I wasn’t ready to retire. I wanted to be involved in something, so I started thinking more seriously about the wine industry. The real tipping point was the people. For the most part, they’re professionals who have already been successful in one career so there’s a certain style and aptitude they bring to the table.

"They’re people who love wine and are interested in that. And,” he adds with a laugh, “they know how to relax and not take themselves so seriously."

After sharpening his understanding of winemaking at the T.V. Munson Viticulture and Enology Center, Tiberia started making what he describes as "European" wine.

"It’s more European than Italian. I’m interested in making varietally sound wine. I specialize in red wines. That’s my true love. I just like the nature of aging reds, the skin contact, the whole process of making a full-bodied wine.

"I’m definitely old world tradition," he adds. "I use a wooden basket press and I’m hands on throughout. I’m with my grapes 24/7 for the first three weeks of their lives."

With cabernet sauvignon as his signature wine, Tiberia is venturing into more food-friendly varietals such as sangiovese.

"As I find grapes that do well in Texas, I’m really interested in learning more about them. I’ve got four years of cynthiana vintages in my cold room. I haven’t bottled it yet because I’m not through working with it and I have really small batches of it.

"I’m not opposed to any grape really as long as it will grow well in Texas. I’m really all about the industry here. I’m not really interested in grapes from California or Oregon. There’s potential in Texas grapes. Anybody who knows how to make wine can make a California-style wine out of California grapes. That’s just not exciting to me.

"I’m a small business owner and I like to work with other small business owners. It feels good to me. My approach to the market is all about relationships. To find a good deal on some grapes from New Mexico is not appealing to me because it’s not Texas. It might be ten miles across the state line but that makes all the difference in the world to me."

Why Barking Rocks? Tiberia says the name was influenced by a few glasses of his own product.

"The barn I converted into the winery is an old horse and cattle barn," he explains. "Helen Knox was the owner. Their brand was HK. We wanted to name the winery something associated with that brand.

Saturday
1:00pm to 5:00pm
Others
By Appointment

"After more than a year of struggling with the alphabetical approach to that, we realized it wasn’t going to work. We’d looked up every HK combination we could think of and nothing hit. So one day, after getting our creative juices flowing with a couple of glasses of wine, we decided that, hieroglyphically, the brand looked like an animal.

"The legs of the H were the legs of the animal and the K looks like the mouth of a barking animal. So we came up with the name Barking Rocks. If you can’t see that, you probably need a little wine. I don’t usually tell that story before noon."

While the winery hosts events, Tiberia says they have to go on around his wine production. "This old barn is probably 40’x80’. I don’t want to outgrow the facility so it’s my production space and my event center. When I’m making wine, events have to work around that. If they can’t, then I just don’t have the event. It gets pretty crowded in here around September. All my stuff’s on rollers so I can move it around as I need to."

Tiberia hopes Texas’ wine industry will maintain its boutique nature but doubts it.

"I’m sure being such a young industry in Texas, we see that more often than not. There’ll probably come a day when it’s not like that. It’ll become more industrialized and more competitive but, at the moment, I can call any one of 100 wineries and talk to someone I know and trust. That’s a nice space to be in. It’s not a typical business environment." And Tiberia isn’t a typical business owner.