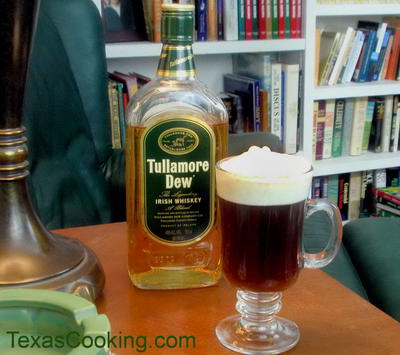 When it comes to spirits, the Irish know what they're doing. Oh sure, you've got your White Russians, your French 75's, your Flying Dutchmen, but Irish drinks are somehow validated merely by their association with the word "Irish."

An integral part of many Irish drinks, of course, is Irish whiskey. The whiskey of the Irish bears a resemblance to Scotch whiskey and for good reason. The Irish probably brought the distillation process to the west coast of Scotland during their efforts to Christianize the Scots. Says Gary Regan in The Bartender's Bible, "It probably went a long way to convincing the Scots that Christianity was fine religion."

While Scotch is more popular in the U.S., there are a number of Irish whiskies, although you may have to visit several package stores to find a variety of brands. And, yes, although most Irish whiskies are blended, single-malt varieties are available for the true afficionado.

Pour the coffee into an Irish coffee glass. Add the sugar and stir to dissolve. Stir in the whiskey. Then, pour the cream carefully over the back of a spoon so that it floats on top of the drink. Voila! Or, that is, begorrah!

Brown Demerara sugar can be substituted for the white sugar for a duskier flavor. Be sure to whip the cream lightly so that it will softly mound. But don't whip it until it's stiff. You're supposed to sip the drink through the cream; the cream shouldn't be a barrier between you and the important stuff. Whatever you do, don't let anyone attempt to "decorate" your Irish Coffee with Crème de menthe. (A point further emphasized by the Tipsy Texan) Makes 1 glass of Irish coffee. Prep time: 10 minutes; Cooking time: 4 minutes; Total time: 14 minutes

In a mixing glass half-filled with ice cubes, combine the ingredients. Stir well, and strain into a cocktail glass.

Not for the timid, this drink.

Poteen (pronounced PO-CHEEN) is the ragged, unaged and highly alcoholic product of clandestine distilling brought about by the British government's taxation in the early 17th century. It is interesting to note that poteen has strong ties to a venerable American tradition. Poteen "is the father of all other illegal whiskies, notably American moonshine, which grew out of the distilling skills introduced by Irish immigrants," according to Ethel Minogue, author of Irish Cooking: Classic and Modern Recipes.

At the other end of the spectrum, however, is the delectable Bailey's Irish Cream. I've known grown men to wander around Texas marinas on a Sunday morning, cradling a Bailey's bottle and here and there adding joy to his neighbors' coffee. Consider Morning with the Leprechauns and the Irish Flag:

Morning with the Leprechauns

Pour all the ingredients into a tall glass almost filled with crushed ice, and stir well.

Pour the crme de menthe into a pousse cafè glass (like an Irish coffee glass, but without a handle). Pouring slowly and carefully over the back of a teaspoon, float the Bailey's on the creme de menthe, and then the brandy on top of the Bailey's.

And, finally, what could be more Irish than the emerald Everybody's Irish:

In a mixing glass half-filled with ice cubes, combine all ingredients, and stir well. Strain into a cocktail glass.

This is a good time of year to brush up on your drink-mixing skills, what with tax season upon us, and especially if you have a St. Patrick's Day celebration in your future. Many would agree, however, that these drinks are appropriate for any occasion, so take a tip from the Irish and enjoy yourself.