From Microchips to Grapevines 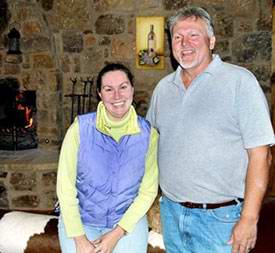 Ken Maxwell has been making wine with his father and his grandfather since he was a kid so the chemistry of winemaking was never a problem. He's also been growing grapes for years so the viticulture was under control. The only real challenge he and his wife, Jenise, faced when they decided to open the Torre di Pietra (Tower of stone) Winery was where to put it.

"Jenise and I met in Albuquerque. We both worked for Intel and we both loved wine. We bought a little plot of land between Albuquerque and Santa Fe," Maxwell explains. "We wanted to put a vineyard there but it just didn't work out."

After 25 years in the high tech industry, the couple decided it was time to make a transition in their lives. They'd lived in Austin for 15 years and in 2002 decided to plant a few grapevines near Mormon Creek in the northern Gillespie County hamlet of Doss. Establishing the vineyard was a family affair. Maxwell laughs about how the conned his five-year-old son Matthew into planting 1,000 vines for $20. "We knew that would make the vineyard part of his heart."

A traffic study convinced the Maxwells that while Doss is a wonderful place to grow grapes, it's not a good place to sell wine. "It's between Mason and Harper and there's just not a whole lot out there.

"We realized pretty quickly that there's no better place in Texas than this corridor between San Antonio and Austin." That's when they decided to build their winery east of Fredericksburg on Hwy. 290. "We get people from San Antonio, Austin, Dallas, Houston, even Corpus Christi."

While the family's Doss vineyard is isolated and planted with European varietals such as zinfandel, primativo, petit syrah, two versions of cabernet sauvignon and more Muscat jallo than anyone else in the U.S., the Fredericksburg vineyard is under attack.

"We're growing faster than we intended. The change in Texas shipping laws has certainly helped." Texas law changed in 2004 allowing wineries to ship to all Texas counties, even "dry" ones.

That facility is an ongoing project. With a winery, tasting room and piazza already bursting at the seams, the Maxwells are adding a 4,000 square foot pavilion between the winery and the vineyard.

Almost as intent as their love of wine is the family's love of music. "We want people to come here and enjoy the wine and enjoy the music and relax. We knew we wanted to focus on live music so we have a band here every Saturday.

"The pavilion's going to have a stage and we'll have a little dance floor. We do a lot of special events and we want to provide facilities for even more," says Jenise.

The Maxwells produce a variety of wine styles for a variety of tastes. They're out to reach a broad audience. "We have customers who know what kind of wine they like and the way it makes them feel. But they're not interested in how many brix the grapes had when they were harvested. They're not technical. They just like drinking wine," Ken says.

"Then we have customers who are really focused on the technical aspects of the wine," Jenise adds. "Then, we have everything between those two and we have a wine for all of them."

"I'm the wine maker," Ken adds. "Jenise takes care of all the financial stuff and the gift shop and I focus on marketing and sales. I like fruity wines. Over the years a lot of people have used heavy oak to mask a lot of problems with their wine. I like to taste the fruit. We don't use a lot of heavy oak in our wine."

Torre di Pietra currently has nine wines available; two semi-dry whites, a chenin blanc and a muscato. The Maxwells also feature three dry reds, a reserve cabernet sauvignon from their Doss vineyard, a classico and a merlot. Chiaro De Luna is a Venetian-style white wine. "Red Flirt is a very popular wine too. It's made to be enjoyed with Texas foods like barbecue and Mexican food. It's slightly sweet. I was trying to name it," Ken laughs, "and it kept changing. It was flirting with my palate."

Maxwell says the biggest challenge to winemaking in Texas is dealing with the unpredictability of the seasons. "The chemistry is pretty easy. It's like going back to the first two years of college. The real trick is being able to blend the grapes. That's the art of winemaking.

"You have to be able to blend to make wine in Texas. We're focused on the Hill Country appellation but we buy a lot of grapes from the Lubbock area too. We buy grapes from Mason and Blanco counties as well but all our grapes come from Texas."

In addition to expanding his Fredericksburg facilities, Maxwell intends to expand his wine selection too. "Our Doss vineyard is the only one in Texas with petit syrah. Those vines, and our Doss primativo, are just starting to come on line. They'll be four years old this year. We're going to be bottling 12 new varietals in the coming months. We've got some wonderful sangiovese from both the high plains and Blanco County."

Between new construction, new bands and new wines the Maxwells' future looks as solid as a tower of stone.

This is a quick and easy side dish on the lines of refried beans. The use of chick peas makes for a drier, lighter consistency and a taste more Spanish than Mexican.

Heat the olive oil in a medium or large frying pan over medium heat. Add the chopped onion, lower heat, and cook, covered for about 5 minutes or until the onion wilts. Remove cover, raise heat to medium again, and stir in the flavorings-garlic, oregano, cumin, pepper and salt. (The amount depends upon your taste.)

Leaving the onions to cook with their seasonings, place the chick peas in a food processor and puree with short, repeated pulses. The texture you want will look like oatmeal flakes rather than a puree as smooth as mashed potatoes. Add the chick peas to the onions and cook for another 5 minutes over medium heat, mashing the chick peas into the onions with the back of a large slotted spoon, just as if you were making refried beans. The chick peas have cooked enough when they are dry, thoroughly blended with the onions, and beginning to brown at the edges of the pan.

Stir in the green chilies and the cream and allow to simmer for a minutes or two. The chick peas are now ready to serve, but they can be reheated without any harm. As they stand, the chick peas will tend to turn stiff. If you reheat, just add a little water.

Present the chick peas garnished with chopped cilantro, chopped scallion greens and lime wedges. If you use lime juice instead, stir in about 1 teaspoon during the last seconds of cooking.