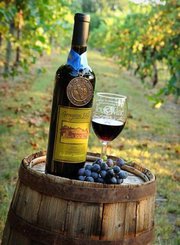 For a guy trying to make simple, down-home wine, Rick Magers is using some pretty high-falutin' grapes. The Grayson Hills Winery, just west of Whitewright, Texas on the edge of Grayson County, is perhaps the only vineyard in the state growing Traminette grapes.

Developed at Cornell University, the Traminette has many of the aromatic and textural traits of its vinifera parent, Gewurztraminer, but it also handles cold winters and most diseases well; important attributes given that Whitewright is just south of the Oklahoma state line and Texas wineries, even the ones in the northern part of the state, are battling with Pierce's Disease.

Released in 1996 in Geneva, New York, Traminette is a cross between Gewurztraminer and Joannes Seyve 23-416 grapes and is a favorite among winemakers in New York, Michigan and Pennsylvania.

"Traminette is a hybrid of a hybrid," explains Magers. "It has loose clusters and works well here because we have some fungus issues."

"I'm just trying to make wine people can enjoy. We're certainly not a snob winery. We're making mostly reds. In fact, I made my first white wine this year."

"It's a little tannic," says Magers. "It goes well with steak or barbecue. I don't believe in heavy oak. I want my wines to be approachable and easy-drinking." Even though Magers doesn't believe in heavy oak, he aged the '04 Cab 20 months in one-year-old French oak barrels. It is described as having, "suave fruit flavors and smooth vanilla notes."

The winery's best seller is its Texas Tapestres Red Table Wine, a blend of Merlot, Cabernet Franc and Ruby Cabernet. That's not a typo. Magers took some spelling liberties to convey the message that the wine is a blend of three different grapes by calling it Tapes-tres (Spanish for three). With 1.5 percent residual sugar, the wine has just a hint of sweetness.

The former Xerox executive didn't take the traditional path to becoming a winemaker. Instead of starting small, he jumped into the business with both feet; with, unfortunately, predictable results.

"I retired in 1996 and started taking some wine-making courses at Grayson College (home of the T.V. Munson Viticulture and Enology Center). In 2000 my wife and I took a short course through Grayson that took us to Europe. We kind of got hooked on winemaking during that trip. We came home and planted an acre of Cabernet Sauvignon. Neither one of us had ever made a drop of wine before that."

Magers admits he was, initially, more interested in farming than wine making.

"I knew nothing about wines when I started taking courses. I like the growing part of it. That was my intent; just to grow grapes. We planted the vineyard more or less just to make home wine and to have our friends over to pick grapes. Then legislation passed where we could have a winery in a dry county so we decided to get our license.

"I certainly didn't start my winery the right way. Most people make small batches for years. I jumped in and started making tanksful of wine. I certainly lost some tanks and some money, but since we were growing our own grapes, it wasn't that bad.

"Now we're making a little wine, lots of friends and no money," Magers adds with a laugh.

"I'm trying to do some things right. We're trying to grow a little, but slowly."

Grayson Hills' capacity is about 3,500 gallons. The winery has 18 barrels and ages the rest of its wine in stainless steel tanks. Magers not only grows grapes but buys more from Palacios and the Texas High Plains. He has also partnered with other wine makers to buy bulk wines to use in his blends.

"The winery is a barn-type structure. It was originally meant to be a barn but when the legislation passed, we turned it into the winery. There main floor is about 1,200 square feet and the cellar is another 900."

Grayson Hills is also an event venue, offering a rural setting for weddings and parties.

"There's a loft above the winery where we hold our events. There's a large deck off of that. We've already had three weddings there and a couple of parties. We also have a harvest festival every fall," Magers explains.

Magers credits Dr. Roy Mitchell, a professor at Grayson, with getting him into the wine business.

"I was really horrible at chemistry in high school and in my first class at Grayson he was talking about things I hadn't heard of in 30 years. I was going to drop the course but he told me to hang in there. I did and he sort of took me under his wing. That really impressed me. He asked me to help him with his winemaking at the Homestead Winery and I did a little bit of an apprenticeship there."

Magers has a simple attitude towards winemaking and business. "My philosophy is just to make a good product and treat people right and they'll find you. You need to make multiple use of your space with parties and weddings and other vents because you're not going to make a lot of money on the wine.

"If I were to give someone advice on how to open a winery, I'd certainly suggest they start with a million dollars. It's going to take more money and more time than you expect."