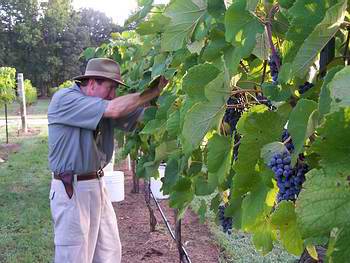 Jeff Sneed's sense of humor is as dry as his wines. The owner and winemaker at Los Pinos Ranch Vineyards in Pittsburg, may take what he does seriously, but not himself.

"I used to live in southern California and had friends who had vineyards. I'd occasionally steal some of their grapes and make wine in the bathtub, much to the chagrin of my wife," explains Sneed, 50. "I eventually became a land baron. I moved from Orange County to Riverside, further inland. I owned about a half acre there. In southern California, that's a land baron.

"That's where I started killing vines. I was trying and erring with just about every kind of vine I could get my hands on."

Sneed, an engineer by training, describes himself as a kind of "geeky" guy who wants to know how things work. That curiosity is what drew him first to tasting wine and then to making it.

"When I first discovered wine it seemed peculiar to me that you could buy five different cabernet sauvignons and they all tasted different and had different tasting notes, especially when I found out that grapes are the only thing in wine.

Sneed's hobby soon became an obsession. Even with his years of schooling and technical abilities, he longed to get back to the land.

"At one point I started thinking about divorcing myself from modern civilization in some way without becoming a survivalist weirdo living in the woods in Montana. So I started looking for land."

Sneed chose Texas because it's more or less in the center of the country and, in his own peculiar reasoning, less likely to get weird.

"I thought all the weird stuff happens either on the east coast or the west coast first and then just sort of oozes across the country until it lands in the middle. I figured this would be the last place it would get to."

Sneed's empire has grown considerably since moving to Texas. The Los Pinos Ranch is 40 acres total with 10 under vine. The vineyard includes Blanc du Bois, Black Spanish, Cynthiana, Cabernet Sauvignon and one row of Champanelle grapes his wife, Dana, the winery's chef, uses to make jelly. "I always tell people my wife has the finest jelly row in the state," Sneed laughs. The vineyard also includes an experimental lot of Carbonara grapes, the only populace planting outside Chile, according to Sneed.

Blanc du Bois and Black Spanish grapes, two Pierce's Disease resistant varietals, are the winery's concession to the pathogen that kills grape vines. "Some of our cabernet vines have already succumbed to PD," says Sneed. "And because my pockets aren't that deep I thought anything that I plant in any numbers needs to have a 99 percent chance of success and then we'll branch out from there."

The winery's most popular wine is a blush made from Black Spanish grapes called Pinky Tuscandero.

"It's real sweet," Sneed explains. "That's what Texans want. We can't make enough of it. We call it chateau cash flow.'"

Not only is Sneed making wine, he's also providing an entertainment venue in the Piney Woods of east Texas.

"We're a little different from your standard winery," he explains. "We've kind of become a nightspot here because there are just not a lot of other places where that can happen. We're open from noon to midnight on Friday and Saturday and noon to nine on Sunday.

"The reception has been more than overwhelming. We can't make enough wine. It's sort of like the prodigal son in a way. Close in we've got 15 or 20 devout followers but most of our business comes from the surrounding areas further out like Tyler, Longview and Dallas. The local townspeople here don't really frequent us. It's just one of those strange things."

Sneed and his wife met through the winery when she was a caterer for his elaborate monthly celebrations.

"I do a themed event every month. I dream up some kind of twisted theme and then we just beat it to death. Some are pretty formal and others are less highbrow.

"I had one for the Roman Goddess Flora. It was a hedonistic Roman feast with a harpist who only played jazz. When I asked the caterer if they knew anything about Roman cuisine they asked if it had any catfish in it.

"That's when I hired Dana's company to come in and cater some of those events. Now on the weekends we do European style tapas and once a month we have our big themed event with dinner and dancing. We also have live jazz every Friday night."

Production levels are climbing at the winery and Sneed plans to increase his distribution. "I think that will really help with the financial aspects of this," he says.

"We've got a very broad spectrum of wines because part of my philosophy is to bring wine to the people. We don't focus on the pretentious part or the food pairing part as much as just the fun of wine and the communing together of people around a dinner table. It's more of an Italian kind of a slant. We use wine as a social lubricant."

The winery is currently producing 5,000 cases a year with plans to grow to as much as 10,000. "We feel like that's our sweet spot," Sneed adds. "We're really concentrating on distribution right now because that's where I can get other people to sell my wine while I'm sleeping.

"We've been growing every year since we opened in 2000. That wasn't by plan, it just happened.

"We've carved out our own little Disneyland here. I'm a classic example of someone living their dream. And I've learned how to make a small fortune in the wine business. You just start out with a large fortune."