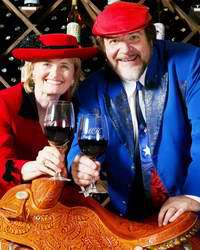 Founded in 1977, the Messina Hof Winery near Bryan is old by Texas standards. That sense of history and tradition is important to owner Paul Bonarrigo and his wife, Merrill.

"I have fond memories of working with my dad and my grandfather making wine. It was always a joyous occasion to be able to sit around a table for three hours drinking wine and hearing the same old stories you've heard over and over again."

Bonarrigo added a sixth generation to his family's wine making tradition when he opened the winery and resort named after his ancestral Sicilian home. Another tradition in the Bonarrigo family is to name the first born male of each generation Paul and designate him that generation's winemaker. In addition to filling his role in the long line of wine makers, Bonarrigo is a physical therapist and owner of the Sports and Back Clinic.

But wine making isn't just a hobby for Paul the sixth. The current chairman of the Texas Wine Industry Development Advisory Committee and marketing chair for the Texas Wine and Grape Growers Association, Bonarrigo takes his wine making seriously.

"When I was in the navy I was stationed in California in the late 60's. While I was there I had the opportunity to go to the University of California at Davis to study winemaking.

"When I came to Texas and started my practice in Bryan (next door to College Station, home of Texas A&M) the university was doing a feasibility study on grape growing. The University of Texas owned thousands of acres of vineyards in west Texas so it was a purely selfish interest for A&M. They were trying to learn which grapes would do best where and we got involved in that study when we planted a one-acre vineyard. We did the work and they collected the data. That was the emergence of the wine industry in Texas as we know it today."

Bonarrigo has seen a lot of progress in that industry. "I think the Texas wine industry today is where California was in the late '80's. The '70's and '80's were the bad old days for Texas wines. We were the pet rock of the wine industry. The '90's was the Rodney Dangerfield era, we didn't get any respect. It was hard to be taken seriously.

"Now we're mainstream. You can put a bottle of Messina Hof up against any California wine and it can hold its own."

And that's not just Texas bravado. Bonarrigo's wines have won dozens of awards throughout the country. In addition to the winery, gift shop, The Villa bed and breakfast and The Vintage House restaurant, Messina Hof will soon be breaking ground on a second winery to support the new "Paulo" line of wines.

"It's a great time to be in the wine business in Texas. We have 126 wineries in the state right now and by Christmas, we'll have 150. It probably took us 10 years to add the last 20 wineries in Texas and now we're adding 20 every six months."

That growth is evident no where more than at Messina Hof. "Right now we're in a tremendous growth phase. We've expanded our capacity to 300,000 gallons a year. That makes us the second or third largest winery depending on who you listen to. We have a fabulous restaurant. Ken Rude, our chef, is dedicated to the concept of vineyard cuisine. We believe the wine has to be incorporated into the food so that they marry together. We grow all of our herbs and spices right here on the property. We also have a 10-room bed and breakfast and we're about a month away from completing a doubling of our retail area."

"The Reflection wine room is going to be situated on our lake. We're not quite sure whether it's going to feature tapas or antipasto, but it's going to be a great place to sit and have some wine and watch the sunset."

The new Paulo winery will have a 40,000 gallon capacity and will focus on the new line of Messina Hof connoisseur wines. After establishing himself in the everyday wine category, Bonarrigo is looking to move into the high end of the market.

"Overall we're about the 42nd largest selling wine in the state and that includes all the California and European wines. Now my plan is to follow the California model. They said, 'world, we can not only produce good, everyday wine, but we can also produce wine that can compete with the first growths of France.' In '96 we launched a meritage that was a blend of cabernet sauvignon, merlot and cabernet franc. Last year we added cabernet, merlot, shiraz and port to that line and now we're building the winery to support it."

Comments from his physical therapy patients have prompted Bonarrigo to start another line of wines under the "Tradition Cellars" label. The line will feature cabernet, chardonnay and rose with a sweet spin.

"A lot of my older patients were telling me that their doctor was recommending that they drink a glass of red wine before going to bed, but they hated red wine. So I decided to make a red with about 3.5 percent residual sugar and they love it. One of the toughest things for people to deal with is the question, "is this wine sweet or dry?" so we put it right on the label. Now they're drinking a red varietal wine and feeling good about it."

Bonarrigo splits time between his winery and his practice with the help of a lot of people. "I have about 70 very dedicated employees at Messina Hof and my associate who has been with me at my therapy practice for about 25 years. They're the ones who make it possible for me to do what I do. I spend about four hours a day at my practice and the rest of my time at the winery.