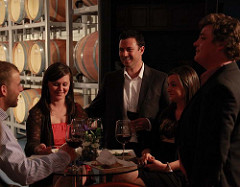 It's easy to tell Monty Dixon, owner of the Bar Z Winery, is from Texas. And it's not just because of the ranch-style name of the winery either. He's got a Texas attitude as well. For example: "We're not going to get any bigger britches until we grow into the ones we're wearing," he explains.

That is to say, even though he'd like to increase production, the Bar Z Winery in Canyon, Texas isn't going to expand until it's ready.

Founded in 2003 in Dixon's hometown of Morse, Texas, the winery has already outgrown two locations and relocated to just south of Amarillo in the Texas panhandle in 2009. Part of Dixon's rationale for moving was so his wife, Amber, an ophthalmologist with a practice in Amarillo, wouldn't have to drive 100 miles each way to work every day.

Dixon is just as straightforward when asked how he became a vintner in the first "Because they won't sell beer to a 12-year-old."

After learning there were laws about selling beer to children, Dixon decided to make his own. When he couldn't get his pre-teen hands on any hops he changed his plans again, making his first batch of wine with the soul purpose of creating any sort of "I had some wild grapes so I decided I'd make wine. It was awful. But, if you put enough sugar in it and you could choke it down." Dixon's evolution as a winemaker parallels Texas'. What started out as a novelty decades ago has grown into a respectable player on the world's wine scene. Something the Texas-born Dixon is proud of.

"That's the best part of all of this," he says. "When people taste my wine and say, ‘Damn, this is good. So, what part of California do your grapes come from?' I get a kick out of telling them we use 100 percent Texas grapes. We're pure Texas. I love to see people realize there's not just a Texas wine industry, there's a good Texas wine The Texas Department of Agriculture's (TDA) GO TEXAN program is responsible for much of the success of today's Texas wine industry.

Through its websites, publications and marketing programs, the TDA has spurred Texas wine production from 600,000 cases in 2001 to more than 1.2 million cases in 2009. Dixon's grapes not only come from Texas, they come from a particular part of Texas, the High Plains American Viticultural Appellation (AVA). American appellations were created to enable wine consumers to know where the grapes that went into their wines came from. There are currently eight federally approved AVAs in Texas. Eighty- five percent of wine from an AVA must be made from grapes grown within the area's boundaries. If the wine is a varietal, 75 percent of that wine must be made from the designated grape variety. The 12,000 square-mile High Plains AVA was approved in 1993 and covers much of the central and western Texas panhandle, including Lubbock.

"Damn, this is good. What part of California do your grapes come from?"

"I had a vineyard," says Dixon. "And it got sprayed with 24-D (a herbicide). I was going to replant and start over but some buddies of mine over in Lubbock said, ‘Don't do that. We'll sell you some grapes.' That sounded like a great idea to me, so I buy all my grapes now, and they're all from Texas."

Most of the 1,400 cases of wine Bar Z produces every year are reds. An occasional white wine slips into the mix because, according to Dixon, "Half the people who come in ask what kind of white wine we have, so I have to make some. I'm more comfortable with reds though.

"I dabble with different kinds of whites. They come and go. Right now we have a Chenin Blanc and I think we might possibly make some Viognier this year and maybe a Dixon's red wines include Cabernet Sauvignon, Tempranillo and Sangiovese, lush wines that he says can be cellared or consumed now.

"My cabs tend to be a little ‘big' with a lot of tannin. I try to do as much aging as possible before I release them. I won't release anything before it's ready but they have a good, long life. We barrel age our reds in French oak but it won't hurt them to be a self-taught winemaker, Dixon turned professional after winning the amateur division in a number of wine competitions. "My wife decided it would be just as easy to make wines to sell as it was to make wines for us to drink. Plus, maybe we could pay some bills. So we went into the business.

"I did all my experimenting with different yeasts and different grapes before I ever went commercial, so I'm not a big piddler now. I tinker with small things and make minor adjustments but I'm past the experimenting stage. It's a very bad idea to start experimenting after you get your license. You're going to pour out a lot of wine.

Monday-Tuesday
By Private Reservation Only
Wednesday-Sunday
3:00pm to 9:00pm

"To be honest, there are some wines in Texas with a way to go. A lot of people get into this business without any experience. They decide they want a winery so they just throw a lot of cash at it and open up. They come from other businesses and start making wine without really knowing what they are doing. Or they'll hire a winemaker.

And then that winemaker has his own ideas and he begins making wines in the style he wants and then the owner's not happy and they get crossed up. I don't have any of those Dixon's production facility is as unique as his wines, and just as Texas-centric.

"Shouldn't a winery in Texas look like a barn?" he asks. "This isn't Tuscany or the Napa Valley. This is Texas.

"Plus it's sturdy. The wind blows pretty good up here." Dixon has other practical reasons for using the simple construction method.

The walls rise 11 feet before sloping inward. The center clearance is 16 feet with no horizontal supports, allowing the winemaker to put a barrel room in the middle of the building without having to sacrifice any vertical space.

"It's easy to build and easy to expand," Dixon explains. "You can add on to that's even easier than getting new britches.