It's All About the Bats 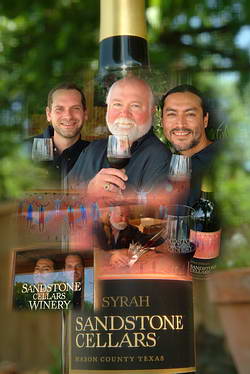 Don Pullum was looking for some solitude when he took up residence in a 19' motor home and started planting grapes in Mason County. He'd done the Ivy League, corporate thing with his degree from Harvard and his high-powered venture capital career in the D.C. area. A little peace and quiet, a little homemade wine, a little Texas Hill Country go-to-work-when-I-feel-like-it lifestyle sounded pretty inviting.

"I was behaving kind of like a hermit out here, just planting grapes and living in an RV," Pullum jokes. "Apparently I'd developed a reputation of being 'that crazy grape guy.'

"I was one of those really geeky home winemakers who read all the professional journals and all the textbooks they were using at UC-Davis. I spent 11 months looking for vineyard property with a very keen idea of what I wanted. I was looking as far west as Schleicher County. I didn't go any further west than that because it was very lonely out there even for someone who wanted to be a hermit."

That was before he met Scott Haupert and Manny Silerio.

"One of the old time ranchers here in the Bluff Creek area had sort of a block party where he gathered all the ranchers around the area together," recalls Pullum. "There were eight or nine of us. That's where I met Scott and Manny. They were interested in wine and I was still making wine at home and I brought some over and that's how we met."

Haupert, a successful professional violist, had grown weary of the Hollywood recording industry and wanted to get back to his Texas roots. Silerio's mother, Santos, had a treasure trove of family recipes. The two partners put them to use when they opened Santos Taqueria in 1998, the same year Pullum planted the first grapevines in Mason at his Akashic Vineyard.

By 2004 Santos' had developed such a following the parking lot was overflowing. Haupert and Silerio bought the building next door just for the additional parking space. They didn't want the structure and were stumped for what to do with it.

Pullum is still amazed at how the Sandstone Winery evolved. "They had no idea what they were going to do with the building. We sat around and drank a lot of wine and talked about what would be the most suitable business and came to the conclusion that a little boutique winery would be just right." That's when Pullum went to work making what he calls fusion-style wine based on what was to be his last homemade concoction, Levier, French for "kitchen sink."

"I'm ignoring the traditional blending of grapes and whatever tastes best together we blend together. We'll frequently have grapes that originated in southern Spain blended with grapes from Italy and the Rhone and that sort of thing. We're doing a lot of Mediterranean varietals.

"We're sort of the grape whisperers," he chuckles. "We let the grapes tell us what they want to be."

And while Pullum appreciates all types of wine, he's creating blends that reflect his personality. "I enjoy many different kinds of wine but my preference is that I want very balanced wines because I want wines that will age. We're only doing red wines at Sandstone so I do want a wine that's going to age properly and develop some complexity. I'm really anxious to have that show up in the wines.

"I want the grapes to reflect their topicity even though we're putting them together in wild parties of wine so to speak. I still want them to be able to show their own personality at that party.

The conditions around Mason give Pullum the infrastructure he needs to experiment with different blends. "It's got this beautiful sandy soil called the hickory sand. Grapes like to keep their feet dry and this land percolates water pretty quickly. And you can manage the vigor of the vines in these sandy soils because they're low in nitrogen. By managing the food we deliver and when we deliver it we can manage the vigor of the vines, which is important in getting a quality grape. The water's beautiful here. We've got a good, strong aquifer called the Hickory Sands Aquifer with pretty neutral pH water."

Another thing Mason has, just like most of Texas, is Pierce's Disease, a pathogen carried by glassy-winged sharpshooters that eventually kills all but the heartiest grape varieties. Pullum's answer to the insects that carry the disease is both practical and elegant.

"I read somewhere that the exoskeletons of glassy-winged sharpshooters had been found in the guano of Brown bats. There's a huge colony of Mexican Free-Tailed bats in a cave near here. I figured if Brown bats ate sharpshooters, then Mexican Free-Tailed bats probably would too, so I put up a couple of bat houses. Now I have my own colony of bats. Each bat eats 2,000 insects every night. They must be eating the sharpshooters but even if they're not, at least they're keeping the mosquito population down."

The bats either can't tell the difference or don't care. Insect traps have confirmed the sharpshooter population is much lower around Pullum's vineyard than at the seven others that have been planted throughout Mason County.

"I'm having a great time, and if you're not having fun what's the point?"

Heat oil in a medium saucepan over medium heat. Add onion and saute until soft, then stir in cilantro. Add tomatillo sauce (use fresh if desired) and season with salt and pepper to taste. Reduce heat to low and simmer for 3 to 5 minutes.

Add cooked chicken and broth, mix all together and heat through (do not over-stir the chicken). Serve hot.