Catching lightning in a bottle 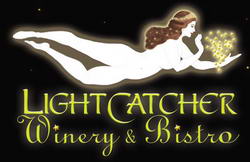 No one can ever accuse Caris Turpen of not being creative. Take the name of her Ft. Worth winery for instance.

While LightCatcher is a subtle reference to her career as a cinematographer it may also be a more veiled admission of her desire to catch lightning in a bottle.

After a successful film career where she worked on such diverse productions as "60 Minutes" and "WISHBONE" a PBS series about a little dog with a big imagination, and a stint at George Lucas' Industrial Light and Magic, Turpen sees plenty of parallels between film making and wine making.

Turpen, the daughter of a Texan, grew up in San Francisco and came to Texas after marrying her husband, Terry. The idea of opening a winery grew out of her winemaking hobby. She says there are two kinds of hobbyists: Those who want to make wine cheaply and those who want to make it well. She fell into the latter group where she found little support.

"I was in a little local wine maker's club and I was online looking for information and I bought a bunch of books on how to make wine and I saw so much conflicting information, so much subjective opinion that was being touted as science and so much, frankly, suspect information, that I got really frustrated."

Not interested in making cheap wine, Turpen went back to school and earned an enology degree at the T.V. Munson School of Viticulture and Enology. Munson was the viticulturist credited with saving the French wine industry at the turn of the last century.

"I wanted to make top-quality wine. And, sadly, I didn't find enough people who had the same level of interest that I did. Either they just wanted to make cheap wine or they were quirky about it and trying to make wine out of carrots and kiwi. That's all fine and good but I wanted to be like a top level Napa Valley winemaker who knew what they were doing."

That's when she heard about the Munson school which is affiliated with Grayson Community College in Denison. "When I realized it was only 100 miles from my house with classes set up on weekends, rather than Monday through Friday, so all of us second-career people could go there, I started taking classes, not sure what I'd find."

Turpen, it turned out, found exactly what she'd been looking for. The school concentrated on the science of winemaking and left the art to the students. "It gave me the foundation in science and the critical knowledge on how to create and protect my product. It allowed me to become not only a consistent winemaker but also taught me where I could break the rules and where I couldn't. I'm pretty fearless when it comes to breaking the rules and trying new things."

Turpen demonstrated that fearlessness when she decided to make bold red wines. "All of my big reds are enhanced with proper food pairings but they can all be consumed by themselves. You don't have to have them with food in order to balance them.

"Many of the Bordeaux-style cabernets that are big and chewy and dense, you have to have something fatty with them to in order to calm down the tannins. Texas grapes don't typically produce that much tannin. The vineyards are too warm, unlike the Bordeaux region, where it's a lot colder and the vines are a lot smaller. Texas grapes don't have those kinds of tendencies so I'm naturally getting wines that don't have that kind of tannin content which is your major obstacle in food pairing or just sitting and enjoying a wine without having to have the food."

That's not to say Turpen isn't interested in how her wines pair with food. She's an accomplished chef who plans to publish a cookbook in the near future.

"Cooking is another creative outlet. Winemaking has a pretty intense period through harvest and the initial few weeks of fermentation and then the rest of it is just sort of keeping up with your product inventory, whether it's blending and bottling or moving wine between barrels and things like that. There's a lot of time where you're not really doing much, so I just needed something to keep me going creatively and I thought what better way than to tie into the food aspect more."

Once again, Turpen is only interested in top-of-the-line productions when it comes to her cooking. "It's not just cooking. What I'm doing is really cheffing. I'm making sauces from our different wines. If I were to call myself a particular kind of chef, I'd say I'm a saucier because I really love what sauces can do for foods. In most foods you have either a vegetable or a protein base and they have their own flavors but sauces can go 500 different directions. I've had an enormous amount of fun with it."

As far as her winemaking goes, Turpen refuses to be classified by her California roots or her Texas location. "I would call myself a world winemaker," she says. "I'm neither a California nor Texas winemaker. I source grapes from Texas and I try to bring to my wines the same things I bring to my food and my art. It's the best parts of everything I've experienced whether it's good stuff I learned in California or Italy or France or Texas, it really doesn't matter to me. My wines are Texas wines because they're made from Texas grapes but I'm not a fanatical regionalist. I'm trying to create a style that stands on its own. It's going to be de facto associated with Texas because that's where the grapes are from and that's where our winery is but I'd be doing the same things if I were working in California or South Africa or anywhere else grapes are grown."

Lamb shanks look a bit big and scary at the start, but they cook down to a mild flavor with a melting texture. This is a rich dish that wants a big wine. Serves 6.