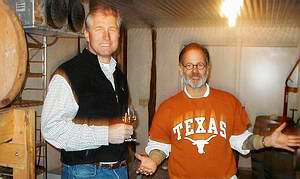 If Lewis Dickson can't make what he calls genuine Texas wine then he just won't make any. It's that philosophy that keeps his La Cruz de Comal winery small. It's not a typical Texas winery in a lot of ways.

For one thing, it's not open to the public. He doesn't have a tasting room and there aren't any cellar tours. He doesn't host special events and he doesn't have any meeting facilities. He and partner Tony Coturri are making wine, not hosting weddings.

Secondly, his wine, much like his attitude, is hard core Texan.

"Wine," says Dickson, "like many food products, should be a regional thing. Do what you can do. That's what makes it interesting. It's not interesting to copy what someone else has done, especially if you have to reveal what you had to do to try to get there, including adding grape concentrate for color and oak chips and oak dust and all the other things people do to try to get that heralded 95 point wine.

"We fully expect our wines to have personality and individual character. In many respects, wines and their evolution are like people. The thing that makes people, and wines, interesting is what's different about them, not what's the same. We don't want our wines to be the same as other producers', anymore than we want our wines to be the same year after year. Each wine is different just as each vintage is different. Our goal is not to envision some "Parker 95" benchmark wine and then artificially concoct a beverage in its image. We offer our wines for what they are not, just as much as for what they are. Only through such an approach will authentic wine be produced-- wine that is true to its origin: the very soil, micro-climate and environs from which it came--its terroir.

Dickson is passionate about the regionality of his wine. La Cruz de Comal, in Startzville, produces only authentic Texas wine from grapes grown in the Texas Hill country. The wine is fermented on natural yeasts with no additions such as acid, sugar, grape concentrate, powered tannins, artificial coloring agents, reverse osmosis or filtering.

"When I say my wine is unfined and unfiltered, I don't mean it was minimally filtered. I mean if you buy a bottle of my wine and throw it in your truck and it slides under the seat and rolls around all day and you want to drink it that night, you're going to have some cloudy wine."

La Cruz de Comal wines are available in a few restaurants and Dickson occasionally opens his doors to people who have tasted his wine and shown enough interest to ask for more information about it.

He says his wine is allowed to be what it wants to be. Winemaking, according to the Houston-based attorney, is not wine creation, anymore than it is wine fixing.

"Good wine is not created," he says, "and bad wine cannot be fixed. Our view is that a winemaker is merely a custodian for yet another phase of the vineyard. He or she must have patience with and respect for Mother Nature. A potentially unique, fine wine is lost the moment a winemaker's intervention derails in from the track destined by Mother Nature."

Dickson developed his passion for wine early while growing up in Houston. "I was probably a senior in high school when I first became interested in wine. It always seemed like a cool thing to do on dates, order a bottle of wine with dinner. I thought I was James Bond."

Dickson says the state is having a hard time creating its own reputation. "It's hard to say what makes a Texas wine different from others. Without an identity, it's hard to recognize. If you're asked to pick a suspect out of a lineup and none of them have a face, it's hard to choose one. That's the situation with Texas wine.

"I think the Hill Country is a better area for merlot than for cabernet, generally speaking. I think the High Plains are better for cabernet than for other grapes. We should be starting to learn what does well in certain places in Texas. The problem is, economically, people don't care. The wine business is getting in the way of wine discovery.

Private tastings for groups of 6+ avail.

"I guarantee if you go to Italy, you're not going to find an Italian winemaker using French grapes, even though it's right across the border and you get a good deal on it. What's the point?"

The same philosophy should apply to Texas, according to Dickson. "If you're going to make wine using grapes from all over the place and cultured yeast, what's the point? You can make that in Texas, Oregon, Washington, New Mexico. How is that a Texas wine, just because it's made in Texas?

Even though Dickson is adamant about his wine being 100 percent Texan, he appreciates what other winemakers are doing.