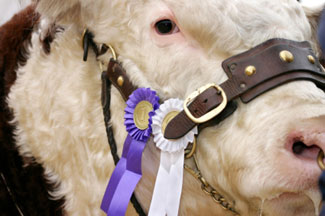 Many Texans still wake up long before dawn either for work or to send our kiddos out to feed and exercise project animals for the annual stock shows. So it shouldn't surprise anyone that we have a hearty appetite for an early breakfast.

Now, the pay-off for all of those hard-working, early mornings comes every January with the kick-off of the Texas Rodeo and Stock Show season, but the busiest time is in February and March. Animals from across the state are trailered in by their owners with hopes of being declared the best of the best, while the exhilarating and sometimes heart-stopping competition known as rodeo imparts cowboy techniques used on the ranches like roping, riding, breaking, and herding.

And while there's no kicking dirt at either of those two events, there's also nothing that compares to the incredible cowboy breakfasts that go along with it all. Most of the breakfasts are provided by professionals who travel from town to town cooking over open fires with cast iron pots, pans and Dutch ovens set up along side genuine chuck wagons that were invented in '66 – that's 1866. Menus generally include scrambled eggs, fried potatoes, beans, biscuits, bacon, sausage, coffee and juice.

This time of year is especially revered by Texans because of tradition and, believe me, rodeos and cattle drives are something my husband, Larry, and I know quite a bit about. Larry's an ex-competitor with the RCA (Rodeo Cowboy Association), now known as the PRCA (Professional Rodeo Cowboy Association). And, as far as cattle drives go, well, that was something our great-great grandfather, William Cost "W.C." Burrier excelled in. He was the first trail boss (in 1866) to drive cattle for Colonel J.J. Myers along a path that was later named the Chisholm Trail.

A detailed account written by J. Frank Dobie in the "Frontier Times Magazine" titled "On The Trail in '66," tells of W.C.'s drive with ten other men and 600 beeves from Lockhart, Texas to Joseph McCoy in Illinois. Dobie recounted descriptions of the men's clothes, tack, daily routines and even what they ate. "The grub consisted of cornmeal, bacon, beans, coffee, and black molasses – sorghum. While passing through Missouri, the men would gather blackberries and buy sugar, milk and cream from the spring houses or farms."

The cooks would hurry their wagons ahead of the slow-moving cattle to set up at the next planned stopping place. Breakfast was generally served between 3 and 4 a.m. and, as soon as the men were served, the cook was off to make evening camp where supper would be ready and waiting when the cowboys straggled in at a cattle-grazing speed of about 10 miles per hour.

Well, Texas' traditional breakfasts (off the trail) are now a whole lot more elaborate and, with the Mexican influence, a whole lot more spicy. And while you're probably not apt to eat like this every morning, weekends sure make a nice time to cook up these recipes and then sit back and enjoy them while watching a good old western on TV.

Boil potatoes until soft, and add to a skillet with butter, garlic powder, green onion, red and green bell peppers, and cook over medium heat for 1 to 2 minutes.

In a small mixing bowl, beat together the eggs, pepper, paprika and milk, and pour mixture into skillet with the vegetables. Scramble mixture until eggs are cooked. Top with cheese and serve. Serves 2 to 4.

Preheat a large skillet on high heat. Remove the center of each piece of bread using a knife or circular biscuit cutter. Butter one side of each slice of bread and grill in the skillet until lightly toasted.

With the bread still in the skillet, crack an egg into each slice of bread, careful not to break the yolk. Season with salt and pepper, and cook until the eggs are to your desired doneness (flipping if necessary). Top with a slice of cheese and serve.

Just for fun, here's an authentic coffee recipe that you may (or may not) enjoy.

Bring water to boil in a large saucepan or coffee pot. Add coffee grounds and egg shell to the boiled water and return to a boil.

Remove from heat and let coffee stand for a few minutes. Add cold water to settle the grounds, strain and serve. The eggshells remove some of the bitter taste of a cheap coffee, and they help settle the grounds.