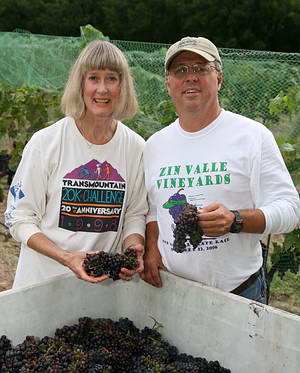 Zin Valle is not only the last winery in Texas alphabetically, but traveling east to west, it's also the last geographically. Surrounded on three sides by New Mexico, Zin Valle is located in Canutillo, just outside El Paso. The winery is so close to the border, in fact, that its fence line is the state line on two sides. Owners Victor and Kathi Poulos welcome visitors from both sides of the line. While their first goal is to make quality wine, their second goal is to give local residents an opportunity to experience wine and wineries.

"We wanted to set up a place where people could come to talk about wines and learn more about them," Poulos explains.

Poulos got his start after striking up a friendship with New Mexico winemaker Ken Stark, who owns La Vina Winery, just across the state line.

"Like most winemakers, I started out as a wine drinker and collector. Ken owns the oldest winery in New Mexico. It's just a few miles from what became our place. When this land became available he brought me out here and told me I could probably grow some grapes in this soil."

From there, Poulos says he crossed the fine line between hobby and obsession.

"It's sort of like golf," he says, with a laugh. "We started with just a couple of plants and now that's grown to four acres. We were selling the grapes and then we decided, 'Well, we ought to at least try to make some wine.' So I made some. Then we said, 'Now we need a place to sell the wine.' And it just kept growing."

Poulos, an El Paso attorney, is not only a wine fan, he's also something of a history buff. After learning El Paso was one of the country's premier grape-growing regions in the 1800s he began wondering what happened.

"I read an article in Texas Monthly probably 10 years ago," he explains. "They said Texas wines had a bad reputation and with good reason. The more I thought about that and the more I learned about the area's history I wondered, 'Why isn't Texas, with its good growing conditions, making wine that can at least compete on a basic level?'

That's when I decided I wasn't going to make a lot of wine but I was going to concentrate on quality."

Poulos understands the limitations of the Mesilla Valley and concentrates on growing grapes that can stand the harsh conditions. The 10-acre winery grows zinfandel, malvasia and gewurtztraminer grapes in its four-acre vineyard. "I recognize where we are, our climate and our growing conditions. That's necessitated bringing in some grapes from California. Things that won't grow here, we bring in."

With no prior winemaking experience, Poulos cracked every book he could find on the topic and leaned on his neighbor, Stark, for practical advice. Winemaking, he says, is more about on-the-job experience than classroom education.

"This is really something you learn as you go. There are plenty of opportunities to make mistakes and you learn from them."

The first grapes were planted at Zin Valle in 2000 and the winery opened its doors, featuring its Rising Star line of wines, in 2004.

"We have a large tasting room and the barrel room where we host sit-down dinners," explains Kathi Poulos, who retired from teaching in the El Paso school district in 2004 to become the winery's full-time business manager.

"Victor has loved wine for a long time and when this property came on the market he started thinking about planting some vines. At least, that's what he told me. I think he might have had this huge game plan all along and just didn't tell me about it."

Zin Valle wines are meant to be paired with food, Poulos says. And while he tries to keep his wines on the dry side, he also tries to accommodate his customers.

"Everybody in this market seems to prefer a little sweeter wine. Malvasia Bianca, a sweet Italian varietal, is our sweet wine. It won a double-gold medal at the Houston Rodeo last year. I'm thinking of changing the name to Chateau Cashflow because it's, by far, our biggest seller.

"We're only making about 2,000 cases of ten different wines a year and that one sells about 500 so it's a quarter of our entire sales."

The winery also makes a merlot that's dedicated to the local humane society. "That's our second biggest seller," Poulos says. "Every year people get to bid on putting their dog or cat on the label and the money goes to the humane society along with a dollar for every bottle sold. It's called Man's Best Friend and it's very popular. That critter factor really works.

Zin Valle is available at a number of restaurants and stores in the El Paso area, a development that's been a pleasant surprise for the Pouloses. "It's been a surprise how important the label and marketing are. That has a huge impact on sales. What's on the bottle is as important as what's in it."

Given his lack of experience in the winemaking business, Poulos has had a few other surprises along the way. "I'm not being facetious about this, but what I've learned is that everything in this business is twice as dirty, twice as heavy and twice as expensive as you think it's going to be."