A Match Made In Dallas 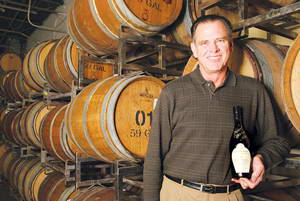 Dan Gatlin, owner of Inwood Estates Vineyards in Dallas, is on a quest. He wants to move Texas wines from novelty act to headliner. To do that, he says, Texas winemakers and wine drinkers have to accept some basic facts:

Grapes that thrive in California's mild climate and rich soil struggle in Texas where nighttime temperatures are often in the mid to high 70s and what soil there is sets on a bedrock of limestone infusing it with massive amounts of calcium. That means Texas wineries trying to make California-style wines are fighting a losing battle.

Gatlin's answer is to not try to play the California game. Don't try to make varietal wines like Cabernet Sauvignon and Chardonnay where only one kind of grape is used. Make blends instead. Mix and match; take the best qualities of different grapes and combine them to create a blended wine greater than the sum of its parts.

That's not to say there's not a place for Cabernet Sauvignon and Chardonnay grapes in Texas, it's just not as the stars of the show. Gatlin's grown 30 different types of grapes in five different vineyards around the northern end of the state and found what he thinks can be stars in Texas.

"Of all those grapes, I think the most noteworthy thing is the discovery of the Palomino grape, especially in northern Texas," he says. "It used to be the most widely grown grape in Spain. When we first started making wine in 1983, the Palomino just jumped off the page. I was stunned by the quality of the wine."

The downside of the Palomino is its low yield, barely half a ton per acre, not even close to enough to make commercial wine production economically feasible.

Nevertheless, Gatlin was so taken with the little white grape that he planted 245 vines in his backyard in 1993. Those vines were replaced with Chardonnay about five years ago, grapes that are still tended by the current homeowner.

"The guy who lives there now really likes having his own little vineyard in the back of the house. I sold a great house and bought a winery. That shows you how smart I am," Gatlin admits with a laugh.

Since he couldn't build a commercial winery around such a low-yield grape Gatlin continued his search. He also realized there are three red grapes that require calcium to become good wine: Pinot Noir, Tempranillo and Sangiovese.

"All three of those grapes are going to favor cherry, raspberry and strawberry flavors and those are all going to be enhanced by calcium."

While Texas has all the calcium any grape could ever want, it doesn't have the 75 degree days Pinot Noir requires. That leaves Tempranillo and Sangiovese, both of which can take the Texas heat as long as they have cool nights. "They both have relatively low respiration rates, about eight hours under 65 degrees every night, which is really hard for most of Texas," Gatlin explains.

But not all of Texas. The Texas High Plains, in the northern end of the state, get just those kinds of nights.

"In 1999, after all those years of research, I went to (grape farmer) Neal Newsom in Plains and told him he was sitting on America's best spot for growing Tempranillo grapes and asked him if he'd grow them for me," says Gatlin. "He promptly told me no. I asked him to think about it and he said no again, because nobody was growing Tempranillo in 1999. Nobody even knew what it was. It wasn't even on the horizon.

"Newsom's place is at nearly 3,800 feet elevation. Normally by 11 every night it's down to 60 or 61 degrees. The top soil is sandy but there are calichi beds underneath so there's still plenty of calcium.

"Finally, after two or three years, I caught him in a weak moment and he said I could put a block of Tempranillo grapes on his land and he'd tend them. He'll tell you today that Tempranillo is far and away the best variety of grapes he grows. That's how we started to build our business."

A Match Made In Dallas

Gatlin blends those Tempranillo grapes with Cabernet Sauvignon, also grown by Newsom, to make his flagship wine, Temp-Cab. What Palomino grapes he can get from a second vineyard in Hunt County are blended with Chardonnay grapes to make Inwood Estates' only white wine – Palo-Chard. When his Tempranillo fields produced a surplus in '05 Gatlin began making his only varietal.

"I wasn't sure what I was going to do with it. I had 20 extra barrels so I just put them in the cellars and didn't touch them for a year and a half. I took it to some wine bars I do business with in Houston and they wanted 100 cases as soon as they could get them. Tempranillo's the only varietal wine we make. The other two are blends."

Growing grapes 400 miles from his winery has also forced Gatlin to become an expert in the unusual practice of field crushing grapes.

"If your winery is a few hundred yards from your vineyard," he explains, "you're not going to get any appreciable deterioration in the grapes from the time you move them from the field to the winery. But, when your vineyard is a 10 or 12-hour drive from your winery, by the time you get to the winery, get unpacked and ready to crush, there's going to be vinegar in the bottom of those bins.

"So we set up our crusher in the field and we dump those bins into it right there. And then we have some temporary tanks the must (juice, skins, stems, seeds) goes in. Once the must is in there with the sulfur dioxide, it's a whole lot more stable. It's basically on cold soak from then on.

"I feel like it's a matter of necessity but I'm the only guy in the state who does it so there are a lot of people who disagree with me."

If sales are any indication there are also a lot of people who agree with Gatlin's winemaking philosophy. He's adding in the neighborhood of 100 accounts a year to an already impressive distribution network. "We're selling to people who are paid to look at 50,000 to 60,000 wines in the wholesale books and pick out 300. If those guys are buying our wine, that's your best form of acclamation."