This article was published in August, 2006. Alamosa Wine Cellars has since ceased operations around February, 2016 due to Jim and Karen Johnson retiring. 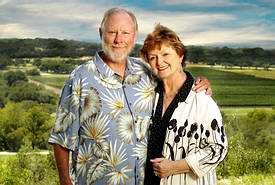 Jim Johnson, owner and winemaker at the Alamosa Wine Cellars, is from the old school. Both his winemaking techniques and philosophy harken back to a time before anyone was even growing grapes in Texas.

One example of that old school philosophy is the field blending of the grapes he grows at the Tio Pancho Vineyard in the high valley of San Saba county.

Modern winemaking techniques call for vintners to blend grape juice after it's been extracted. Johnson goes one step further. "Winemakers used to blend their grapes together before they crushed them. That's the way we still do it. I think it integrates the juices better. You get a more thorough blend. If you look at any California wine more than 70-80 years old, it's most likely going to be field blended."

Johnson was working a full time job in Houston's corporate world and part time at a wine store when he decided to pursue his dream of being a winemaker in 1989. His lifelong passion for wine drove him to question others about how he could become more involved in the industry.

"Working in the wine store was a good way to meet a lot of winemakers and vineyard owners. They seemed like a pretty uniformly interesting bunch of people and I decided I might want to be a part of that. I hated my day job and just wanted to do something else. I guess that was my midlife crisis."

"So I cornered a guy at the wine store one evening and asked him how I could go about becoming a winemaker. He listed off three or four things and then just stopped in mid-sentence. He asked me how old I was and when I told him he said, 'Well, at your age, you're going to need the best credentials you can get. You better go to UC Davis.' (The University of California at Davis is home to the country's top enology program.) So I sent off an application the very next day."

After completing his training, Johnson returned to Texas to become the winemaker at Slaughter-Leftwich. He started dating his wife Karen at the same time. With Slaughter-Leftwich on the verge of collapse, he began looking for other options. "Karen and I looked at each other and decided that since the job market for winemakers was pretty thin at the time, the only way we could stay in the business was to start our own winery.

"I was a little reluctant when we first started talking about it. I told her, 'I'm going to be 60 before a winery could ever amount to anything.' She had a great answer for that. 'You're going to be 60 whether we start a winery or not, so we might as well go ahead.'"

Those first vines, sangiovese and viognier, were planted in the alluvial soils near the Colorado River. The Johnsons added cabernet sauvignon and ruby cabernet in 1996 and tempranillo and garnacha in 1997. The vineyard was completed with syrah, mourvedre and malvasia Bianca. The 10-acre vineyard is cooled by the fog from the river and predominant south winds.

"I'd had some experience with viognier, and sangiovese is a grape that grows just about anywhere. We thought we could make some good wines out of those so that's what we started with."

"The Texas grape growing industry has changed a lot since we started 10 years ago. When we first started our vineyard, the varieties we were planting just weren't available. And now there's lots of sangiovese grown in Texas. And a lot of viognier, a lot of Rhone varietals. There's getting to be a lot of tempranillo in Texas too. We feel like the industry is transitioning to those varietals that we've been showcasing since the beginning."

"We were the first in the state to produce a tempranillo. There's been a lot planted in the last three or four years and we feel like we might have had something to do with that. It's an idea that just makes sense."

Tempranillo grapes were developed in Spain, a region whose climate and soil are almost identical to the area where Johnson's growing his grapes. "You look at Rioja and Rivera Del Duero, both in Spain's Basque country. They've got conditions very similar to Texas. They're both hot and they've got the same droughty, high-limestone soils."

Alamosa's catalog includes an orange Muscat dessert wine but everything else runs toward the dry side.

"Wine gets its flavor from two places; from the fruit and from what you do to it in the cellar. Yeast and finishing techniques have some influence but generally, if you like what comes in from the vineyard then you're going to want to keep as much of that as possible."

"We're not out for the high-extract, in-your-face sort of wines that are the current rage with Oregon pinots. We're trying to make wines that are more like their old world counterparts."

In a heavy bottomed pot, large enough to hold all the veal shanks, cook onion, celery, carrot in the butter on medium heat about 6 to 7 minutes. Add the chopped garlic and lemon peel, cook another 2 or 3 minutes until the vegetables soften and wilt, then remove from heat.

In a skillet, heat the vegetable oil over medium high heat. Dredge the veal in the flour, coating evenly, and shake off excess. When the oil is quite hot, slip in the veal shanks and brown them deeply all over. Remove from the skillet and stand them side by side on the cooked vegetables.

Spoon off all but a little bit of the oil, add the wine and deglaze the pan, scraping up the browned bits. Pour the pan juices over the veal in the pot.

Put the both in the skillet and bring it to a simmer, then add it to the pot. Add the chopped tomatoes, with their juice, the thyme, bay leaves, parsley, salt and pepper. The broth should come up about 2/3 of the way on the shanks. If needed add more beef broth.

Bring the liquids in the pot to a simmer, cover the pot tightly, and place it in the lower third of the preheated oven. Cook for about 2 hours or until the meat feels very tender when prodded with a fork, and a dense, creamy sauce has formed. Turn and baste the shanks every 20 minutes. If the liquid cooks down, add 2 tablespoons of water at a time, as needed.

When the ossobuco is done, transfer to a warm platter, remove strings carefully so the shanks do not fall apart. Pour the sauce over the shanks. (If the pot juices are too thin, reduce over high heat)