The worst pie I ever had in my entire life was a Key Lime Pie.

It was a vivid neon green and so full of gelatin you could bounce it to the moon. Now, after some trial and a few errors, I found a recipe that celebrates the lime and, along the way, I have come across a few other recipes for limes. 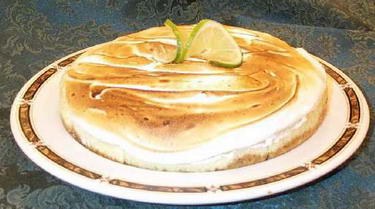 When I think about it, in most cases and recipes you can exchange any citrus fruit for another. You could, in effect, turn a Key Lime Pie into a Blood Orange Pie, or a have a Grapefruit Surprise or a White Chocolate Mandarin Orange Mousse. All that limits you is your imagination.

In all the foods today, there is none more under utilized than the lime. Limes are a tart and tangy fruit that can be added to any part of a meal. From a squeeze in your drink, to making a dressing for a salad, or using it in the marinades for meats, limes are also versatile enough for desserts. Used in the same manner as a lemon, it can be a refreshing finish to any meal.

There are three main types of limes: the Persian, which is large and mostly seedless, the Bearss, and the popular Key lime. Limes were originally native to Southeast Asia and were first cultivated in India. It is the more recent hybrids that we know and use today, which were grown by chance living conditions or mutations. Limes were introduced to the United States only within the past century. The "Key" lime is actually a hybrid of lime and citron, which dates to the 1920's. Currently, Florida produces about 90 percent of the annual crop of this popular pie fruit.

Limes are a good source of Vitamin C, have good dietary fiber and are low in calories. To get the most juice out of a lime, let it set at room temperature for about an hour and then roll it, uncut, across the countertop or table while putting pressure on it. Then slice it down the middle and squeeze. My mom showed me this trick making her version of a Lime Rickey, a drink made from ginger ale with lime juice and a twist of lime. The hard version involves gin.

Some of the other citrus fruits that you can use in the kitchen are grapefruit, oranges, lemons, blood oranges, ugli fruit and tangerines. Interestingly enough, the ruby red grapefruit is a Texas native and was discovered here in McAllen, Texas, around 1929. The hybrid of oranges and pomelos, the juicy grapefruit was discovered as a mutation.

When growing your own citrus fruits at home, just remember that you should pick them at the peak of ripeness. For limes, that is when they are a dark green color. Citrus fruits have no starches, which means they do not sweeten after picking -- a good thing to know when buying juices at the store. Sometimes the costlier juices will be labeled "picked at the peak of perfection." You have to ask yourself why a grower would pick an unripe orange or lemon? Makes you wonder about those that don't claim ripe harvesting.

One of my favorite desserts to make at Lakeway Inn is the Texas Lime Pie. It is so creamy and tart. Like a Lemon Meringue Pie, it has a meringue topping that adds a nice sweet finish to the dessert. This Texas Lime Pie can be frozen without the meringue and wrapped tightly in plastic for up to a month.

Combine the egg yolks, sweetened condensed milk, lime juice, green food coloring and tequila. Mix well. Pour into graham cracker shell. Bake for 30 minutes or until dry to touch (the top of the pie will look and feel dry). Allow to cool.

In mixer, whip egg whites until frothy. Add cream of tartar and sugar while still mixing. When mixture forms stiff peaks and is still glossy, spoon out onto cooled pie. You can either broil the pie in your oven to darken the meringue or, if you have access to an acetylene torch, just use it to brown the top of the meringue.

Pour into a square buttered 8 ¼ x 6 x 1 ¾ inch glass pan or 4 to 6 individual soufflé cups. Create a water bath by setting the pan or cups in a larger pan and filling the larger pan with water 2/3 of the way up the sides of the smaller dish or dishes. Bake for about 30 minutes until the mixture is a pale golden color and set. You can serve it hot or cold.

When it comes to white chocolate, many people can be afraid of using it because of its almost exotic nature. When picking a good white chocolate, choose one with cocoa butter; they have the best in flavor. The others are usually just sugar and shortenings. I can usually find ones like Callebaut, Valhrona or Lindt, which can be bought at most specialty stores like Central Market.

Bring ½ cup of the heavy cream to a boil and add the white chocolate, taking it off the heat immediately. Stir constantly until smooth, and let cool.

In a mixer, whip the rest of the heavy cream and the lime juice until medium stiff peaked. Fold into white chocolate mixture. Whip the egg whites with cream of tartar and lime zest until stiff peaked, but not dry. Fold into white chocolate mixture. Pour or pipe into cups or bowl(s) and chill until ready. Garnish with a dollop of whipped cream and a lime twist.

KeKe is a nice Key Lime liqueur I had one night when I went out. You should be able to find it in most liquor stores. It is optional; you can use lime juice if you prefer.

Heat heavy cream with sugar, KeKe liqueur, vanilla bean and lime zest. When it starts to steam, remove from heat. Remove vanilla bean and scrape out the insides and put back into the cream mix. Gradually pour the cream into the eggs a little at a time stirring all the time until the eggs and cream are completely blended.

Pour into custard cups and put into a 300 degree F oven in a water bath (see directions in recipe, above) for about 40 minutes or until set. It will jiggle a little. When done, put in refrigerator and chill.

Now, you can eat this as a nice custard, or put some sugar on top and broil it to caramelize the sugar, or you can use a torch.