Black Beans Get a Second Chance

The chief attraction is that the bean is black and contrasts nicely with other food colors. 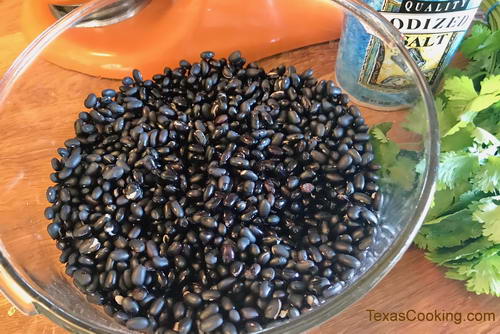 Beans have been a vital link in the Southwestern USA food chain since the beginning of recorded history. Beans that date back 6,000 years have been found in a cave in Peru.

Most of the American Indian cultures had beans as a central part of their diet. When agriculture became fashionable, the Big Three -- beans, squash and corn -- were grown together as the three plants worked well together. Eaten together, they made up a healthy diet. The biggest attraction was that the crops could be dried and stored in large quantities for hard times.

There are hundreds of types of beans. For now, we are going to talk about beans popular in Texas and the Southwest.

Up until a few weeks ago, there had been black beans in my house only one time. Some time ago, a friend whose wife was a missionary in Guatemala gave me a sample of Guatemalan dried frijoles negro. I put them in a fruit jar on my counter to look attractive until it was time to cook them. After a couple of weeks, I noticed something moving in the jar of beans. Apparently the beans had smuggled in bug eggs, and there were a lot of bugs crawling around among the beans. That set my timetable for black bean experiments back many years. Later, someone gave me a can of black beans, and I think I finally threw it away.

To make amends for my harsh treatment of the black bean, I bought a pound of dried ones several weeks ago. As I detected no signs of life in the package, I put the beans in a pot with water and cooked them. I forgot to soak them overnight, so I just started cooking right off. In the short span of a couple of hours they were tender. I cooked them using my pinto bean recipe, ham seasoning and a little chili powder and garlic.

The beans were good. It wouldn't bother me a bit to serve some to the preacher. I still prefer the pintos, but that is a cultural thing.

I thought we would look into a couple of Texas things we can do with black beans.

The traditional method is to soak the beans in cold water overnight before cooking them. I have found black beans cook quickly without soaking. Just put them on the stove, bring them to a boil and then cut back the heat to simmer for a couple of hours.

When the beans begin to simmer, add the ham seasoning and chili powder. Simmer until beans are tender. Add garlic and some salt, simmer a few more minutes and correct seasoning.

Cook rice according to package directions.

In a suitable stew pot over medium-low heat, sauté the onion, bell pepper and serrano in a small amount of oil until tender. Add the tomato and stir a few minutes until the tomato is tender.

Add the black beans and bring to a simmer. (You may want to add some of the liquid from the black beans.) Add the cooked rice and mix all. Check for salt and pepper, and add if necessary.

Serve with your favorite peasant bread. (Note: You can add a cup of diced, cooked ham or sausage to the above for a heartier dish.)

Combine the above and store covered in refrigerator overnight. Keeps well.

Your use of the black bean is limited only by your imagination. They can be turned into refried beans the same as the pinto. Also, black beans can be used like green peas for decoration -- anywhere you need a bit of color. Salads and salsas are especially receptive to the addition.

Eat hearty and go look at the bluebonnets.