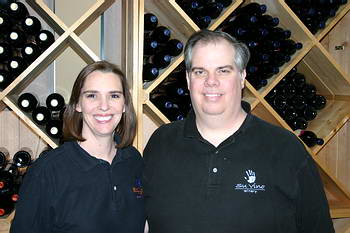 If you're going to open a winery in a town called Grapevine, it had better be good. Especially if it's going to be located in the city's historic district.

Su Vino (Your Wine) opened in 2003 to less than stellar reviews. So when husband and wife team David and Chari Scott bought it in 2005, they knew they had their work cut out for them. David's background in retail and Chari's computer skills were the key.

"I grew up in California," David explains. "And I've always had an interest in wine." That interest grew when he began spending every vacation touring wineries around the state and learning as much as he could about the business. Chari, a Dallas native, shared his interest.

When they moved back to Texas they had plans to do something in the wine industry, although they weren't exactly sure what.

"There's a big chasm between wine fan and winery owner," David admits. "I crossed that chasm very carefully. I had worked in the retail industry, in department stores, for several years. I felt like that was where I could improve on what had been done at Su Vino in the past. We boosted that part of the business by adding some gifts and some other merchandise."

"Chari is pretty handy with the computer so she's able to create custom labels for weddings and corporate gifts," says David. "Those are very popular. The wedding market is very good for that. Corporate business is a little more seasonal since most of the custom-labeled wines are given as holiday gifts."

Su Vino bottles around 6,000 cases of a wide variety of wines every year. An Italian blend called Bella Rosa is its best seller although the Scotts also produce a number of other reds and whites.

Most of their wines are fruit forward without a lot of tannins although their "Amarone" is made to pack a punch. It is described as "a huge berry fruit balanced by strong tannins." It is a massive red wine made from Italian varietal grapes that were air-dried for several weeks to intensify the fruit before crushing. It is a perfect accompaniment to a hearty lasagna.

"There's that group of people who love a big, oaky wine but we've found they don't really sell all that well for us," David adds. "We have a lot of tourists visit our shop who aren't necessarily experienced wine drinkers. They like a lighter, fruit-forward wine like our Bella Rosa. That's our best seller. I'd say that's our signature wine. We also have a green apple reisling that's very popular."

While Bella Rosa is the winery's best seller, the Scotts are also particularly proud of their gewürztraminer which has won four of the winery's 45 medals. Winemaker Bobby Rodriguez has won awards at the Dallas Morning News Wine Competition, Lone Star International, Wines of the South, Pacific Rim International, San Antonio Express-News Wine Competition and the Florida State Fair among others.

In the heart of the Grapevine historic district, the winery counts heavily on tourists and conventioneers from the Gaylord Texan Resort and Convention Center for a lot of its business. Tourism is so important that wineries in the area have banded together to promote themselves and their products.

"The Gaylord actually runs a trolley right downtown," David explains. "And then there's the new Great Wolf Lodge which is an indoor water park that opened just a few months ago. There are several other large hotels and attractions in the area as well.

"The city is very good about promoting the wine industry here in town; not only within the local area but around the state and in surrounding states as well.

"The winery owners understand that there are millions of people living within a 25-mile radius and we got to thinking about what can we do to promote ourselves as well. We got together about a year ago and developed a wine trail."

Grapefest, a wine festival held in September, grew out of that brainstorming session, along with a spring wine trail. "There are eight wineries participating in the wine trail. We held it over Valentine's Day and it was a huge success."

Most of Su Vino's wine is sold through the tasting room although it is available in a few restaurants and small retailers in the Grapevine area. The 4,000 square foot winery has recently added to its production facility to try to expand its modest distribution.

"We're pretty equally divided between production and retail. Our tasting room can hold about 40 people at a time. The storage tanks are right out in the open where people can see them. People seem to like that. Whenever someone asks for a tour of the winery we tell them they're standing in the middle of it. There's not a whole lot more to see."

Scott would like to be able to someday grow his own grapes since Texas grapes are often scarce. Today the winery buys grapes from several locations including California.

"We'd like to be able to incorporate more Texas grapes into our wines but they can be hard to come by. Right now we're working pretty hard just to keep up with the demand we have. We'd like to expand but it's going to take a while. We have an 18-month-old son and he takes a lot of our time."

*As a substitute for honey mustard, combine one tablespoon Dijon mustard and two tablespoons honey.