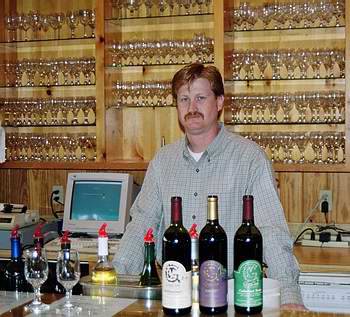 Wineries in Texas change hands just about as often as the Alamo. That is to say, never. Yet it happened at Grape Creek Vineyards in February of '06 when Federal Express executive Brian Heath purchased the operation from the Simes family.

Grape Creek was established in 1985 by Ned and Nell Simes. The Simes' started with the modest goal of creating the dry French-style dinner wines they enjoyed. "If we couldn't sell them, at least we could drink them," Ned explained.

The couple hired noted wine making consultant Enrique Ferro from Temecula, Calif. to help them get started. The Grape Creek location along Highway 290, just east of Fredericksburg, was chosen for its microclimate and the high traffic flow. The vineyard was planted with six acres of cabernet sauvignon, chardonnay and sauvignon blanc. Over the years the Simes family added 11 more acres of grapes on the 100 acre estate. The land also supports a five-acre peach orchard.

The Simes' made their first wine in 1989. The yield, less than 700 cases, was small but impressive. The family's chardonnay won a gold medal and best of class at the Houston Wine Club's competition. An underground aging room was added to the growing winery in 1990 to make room for oak barrels so the wine could be aged at the proper temperature.

Above the winery is a small bed and breakfast.

The family continued to battle Texas' unpredictable weather and Pierce's disease (a bacterial pathogen that kills grapevines) until Ned's death in 2004. The loss of the Simes patriarch marked the beginning of the end of the family's involvement.

Jason Englert was brought in to replace Simes as the winemaker and in little more than a year, a new owner was found.

Englert earned his degree in biology from Texas Tech before apprenticing at the Llano Estacado Winery in Lubbock. "Greg Bruni is the winemaker there. He had a lab position that I took. Wine making became a passion for me and 10 years later, here we are." Englert's first priority has been to update the winery's varietals.

"A lot of the wineries back in the 70's and 80's were making French wines," Englert explains. "We've kind of learned over the years that the best Texas wines are blends.

"We have some new wines we've just released; super Tuscan, merlot, sangiovese and cabernet. It's hard to make a solid varietal wine in Texas. The weather is so unpredictable and the viticulture industry in Texas is so young that we're still learning a lot about what grows best here. We buy most of our grapes from other growers."

There are more changes planned to the winery but Englert says some things will stay the same. "We're going to continue to make Bordeaux style wines. That's probably going to be our most premium style but we're also going to make Italian wines."

Grape Creek also offers a selection of lighter reds. "Because we're in Texas, we make some semi-sweet and sweet wines. That's where the beginning palate seems to lie here. We have a Muscat canelli and we make a cabernet blanc out of cabernet sauvignon grapes. That's done in a white zinfandel style but with a little higher quality fruit. We're the only winery in Texas making a cabernet blanc. That's our major seller."

"We'll make a fruit-forward style without so many tannins that you have to lay it down for months before it's ready to drink. I want to make our wines approachable. We'll make some wines that are meant to be aged but most of our wines are bought by tourists who are going to drink it with dinner that night. We understand who we're selling to and we want to meet their expectations."

The new owner is also planning to revamp the vineyard. "There are only about four or five acres of grapes left. We're so close to Grape Creek, which is a perfect habitat for the insects that carry Pierce's disease, that we've had a lot of damage. We've also had a lot of freeze damage over the years." While there's no planting schedule yet, Englert says the plan is to add Pierce's resistant Black Spanish grapes to the winery's mix.

"Pierce's disease can be managed. The bacteria is all over the world. It's certainly here. All you need is a vector to move it around. Right next to a creek, we have plenty of vectors. With proper techniques, you can keep your losses to a minimum. A lot of the problem in this area is that it wasn't managed properly and it just sort of snuck up on everyone."

There are also plans update and enlarge the winery itself.

Englert adds that the winery will increase its production from the current 3,000 cases to around 12,000 over the next five years. That means Grape Creek will continue to buy the majority of its grapes.

"Our goal is to buy all our grapes in Texas, but it's getting tough because of all the wineries opening up. It's getting harder to secure grape contracts. But that's good. The more wineries there are in Texas, the more people discover them and the more they want to experience them. It's good for all of us."

HELPFUL HINTS: Use as a dip for vegetables or crackers. Or try as a topping for various foods, such as rice casserole, stuffed vegetables, or chapati roll-ups.