Fiesta Winery: Built on a Love of the Land 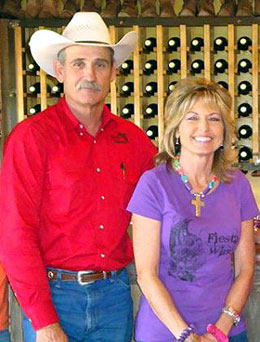 Rather than focus on what Bend, Texas doesn't have, like traffic jams and pollution, Stephen and Sally Baxter, owners of Fiesta Winery, have decided to focus on what it does have, a fair stretch of the Colorado River and plenty of hilltops from which to see it.

"We're on a ranch, out in the country," explains Sally. "And probably 95 percent of the people who come through our tasting room are from the city. We wanted to create a place that was conducive to just sitting, relaxing and hanging out. Part of drinking wine is just slowing down and enjoying life. That's the kind of atmosphere we wanted to create."

Not quite five miles from Colorado Bend State Park and surrounded by such colorfully named sites as Blackjack Hill, Buzzard, Bull Knob and Messenger Mountain, Fiesta Winery was born out of both passion and necessity -- a passion for cooking and the necessity of earning a living.

"Our daughter, Savannah, loves to cook. She's in culinary school right now. And it's always been Stephen's heart's desire to make a living off the ranch," Sally says. "We have cattle but we don't have enough acreage to make a living off of it, so growing grapes and making wine have been the answers to both of those dreams."

The desire to make their ranch profitable isn't surprising. Stephen and Sally are the fourth generation of Baxters to live on the land and the next two generations are already lined up. "My son and daughter-in-law live in the house across the road," says Sally. "Their son, my grandson, is the sixth generation to live here. Stephen and I live in the house that belonged to his grandparents. We're hanging on to the last little bit of property in his family."

Even by Texas standards the 500 acres the Baxters own is a sizeable chunk of land. There's plenty of room to grow, which is just what they have mind. The idea of installing an observation deck closer to the river is just one of their plans.

"Eventually we want to add a restaurant," explains Sally. "We host weddings and parties here, and we want to be able to do that overlooking the river."

Stephen and Savannah are the winemakers at Fiesta. They got their training at Grayson College in Denton and made some wine at home before turning pro. "It was one of those hobbies that just kind of gets out of control," admits Sally. "We have a game room and a pool in our backyard and I talked him into making that our tasting room. So we added a patio area so we could have a place for special events.

"There were also a couple rooms in our barn that were sectioned off and had air conditioning. So we put our tanks in there, and that's how we got started. We were just kind of a microwinery. That was a year ago. Six weeks ago we knocked out a wall in the barn and sprayfoamed the whole thing. Now what was the barn is our winery."

Luckily, with all the current and planned construction, the Baxters had some prior building experience. They were in the rock business for 20 years. "We sold building stone," Sally explains. "We started the business and built it up over 20 years and then sold it eight years ago. And we've built homes too. Stephen is an energy-efficient home builder."

We have a Pinot Noir called Sweet Dreams and a Reisling called Skinny Dippin'.

The family has plans to add more grapes to the vineyard too. Currently only three of 100 available acres are under cultivation. The Baxters are eagerly anticipating their first crop of Cabernet Sauvignon and Mourvedre grapes with plans to add Tempranillo vines next year. They're going to need them. The winery produced 1,400 cases of wine in its first year of operation and there's demand for more, especially the Pinot Gris called Texas Well Water.

"That 1,400 cases was far more than we ever expected," Sally says. "We had a tremendous year. It's worked out really great.

"Most of our success has been with our sweet wines. We didn't plan it that way. My daughter and I like sweet wines and my husband likes dry. It wasn't any great marketing strategy that caused us to make sweet wines. There are two of us who like them, so that's what we made. Sweet wine is the most popular in Texas. Texans love their sweet wine.

"Now, along with Texas Well Water, we have a Reisling called Skinny Dippin' and a couple of reds. We have a Zinfandel we call Home Sweet Home, a Merlot we named Country Road Reserve and a Pinot Noir called Sweet Dreams.

"We sweeten our wines with fruit instead of sugar and that's a little bit different. That makes our wines very smooth. We have some good dry wines as well, and we're adding to that line but, for right now, we're known for our sweet wines.

"We have lots of young people who love our wines. My daughter is 26 and some of our wines are for what you might call ‘newbies' who are just starting to drink wines and want to taste something sweet. That's been a big part of our success."

Another big part of Fiesta's success is a vast, virtually handmade distribution network. The wines are currently available in 43 locations with more being added almost weekly. All that wine is delivered by the Baxter family.

"We knew that because we're so remote," Sally explains, "that we weren't going to make it on just tasting room sales. We get a lot of traffic from people going to the state park but with gas prices what they are, we knew we were going to have to get our wine into places people were already going."

Even growing up in the ranching industry where cattle don't wait to be fed and crops can't be postponed, Sally is surprised at the amount of work involved in owning a winery. "I was really surprised at the way this has exploded. We do this full time now. Stephen still does some construction work on the side but this is our business now. We work pretty much seven days a week but that's the life of being a rancher or a farmer.

This has been hard work, but we absolutely love it."

Heat olive oil in a Dutch oven over medium-high heat until smoking. Brown the oxtail in batches, and set aside. Add onion, garlic, and bell pepper to the pot. Cook, stirring constantly, until the onion has softened and turned translucent, about five minutes.

Pour in white wine, bring to a simmer, and cook for five minutes. Add browned oxtail, beef broth, chocolate, and bay leaves. Return to a simmer, then reduce heat to medium-low, cover, and simmer for three hours.

Season with salt and paprika, stir in carrots, cover, and allow to simmer until carrots are tender.